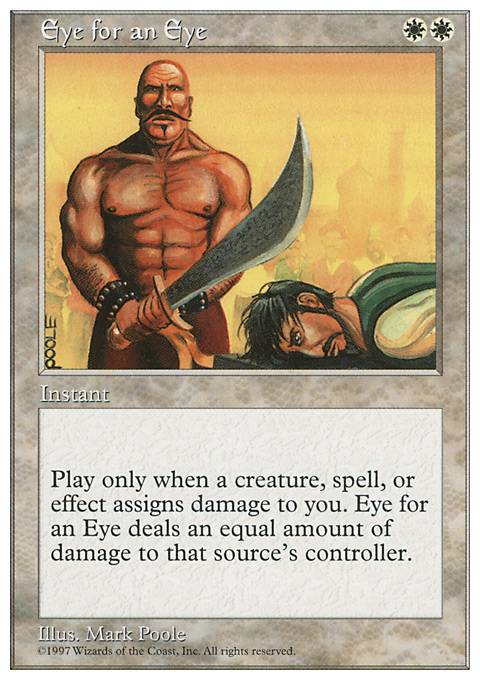 Eye for an Eye

Eye for an Eye Discussion

I Love redirecting damage!!! Have you thought about adding more doublers? If you haven't you should, these things are fun and fun... is Good! Dictate of the Twin Gods , Insult , Angrath's Marauders , and non traditional utility cards that can copy Mirage Mirror , Strionic Resonator .

Anyway since it has been 3years since you updated this it's unlikely that you will see this anytime soon, but have fun hitting players with their own damage! I know I do =D

NV_1980 thank you so Much for comment !! Starting from the the first couple of card that you mentioned Eye for an Eye and Reverse Damage i prefer the two that you mentioned that i already play because Deflecting Palm unlike eye for an eye it prevent the damage too and it could be decisive against the big occasionally threat of our opponent and comuppance is simple amazing!! I would like to enter the two that you mentioned but it could be considerable to enter Teferi's Protection as well and even though we play 100 cards the possibile slots are very few. Unlike that i said i think that Sudden Spoiling and Michiko must be inside this deck but i really struggle to find free slots, i m thinking on take out Batwing Brume and Sudden Spoiling could be a good choice. I played Karmic Justice but i took it away because with really few free slots i prefer to put something other inside. Thanks again for comment !!! And if you have any other suggest for what i could take out tell me. I Also consider Linvala, Keeper of Silence

This deck looks very solid; +1 from us! We are using something similar (still needs to be posted on tappedout). Some of our favourite and least expected cards we use are very much like Deflecting Palm and Comeuppance . We use some of the older cards that have a similar effect like Reverse Damage and Eye for an Eye .

Other control cards we love to use include Sudden Spoiling (this is one of the most underrated cards of all time; it can turn any army into helpless babies, whether they have hexproof/shroud or not), Karmic Justice and Michiko Konda, Truth Seeker (makes people think twice about blowing up our stuff).

Have fun playing and refining this.