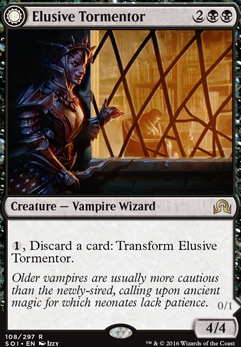 Take everything; give nothing back
by bugsbob 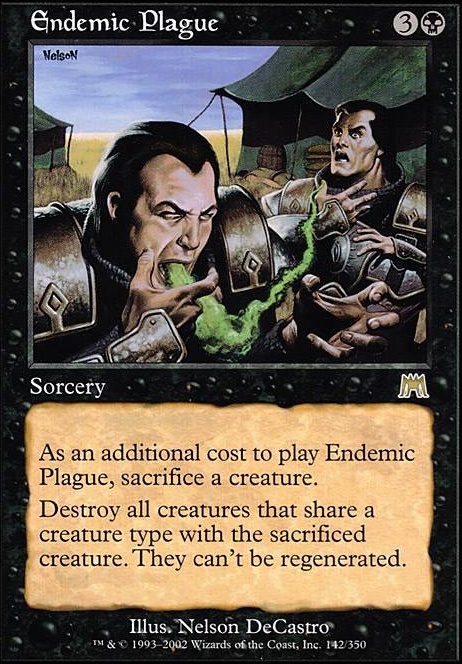 Rhadamanthus on Lazav the Multifarious and transform/flip ...

Only a double-faced card can actually transform. For your example with Elusive Tormentor  Flip, this just means nothing happens and Lazav, the Multifarious is still a copy of the Tormentor. However, for your example with Jace, Vryn's Prodigy  Flip or Liliana, Heretical Healer  Flip there's a special rule that says Lazav will go to exile and stay there.

711.8a If a player is instructed to put a card that isnât a double-faced card onto the battlefield transformed, that card stays in its current zone.

SpecimeN87 on Lazav the Multifarious and transform/flip ...

Conversely, what if I were to copy either jace, vryn prodigy or Liliana, Heretical Healer  Flip? Is it now a planeswalker?

I... think the valid challenge right now is a build-around Grixis commander...?

Whenever Zahel, The Deathless One deals combat damage to a player, return target instant or sorcery spell from your graveyard to your hand.

Whenever Zahel, The Deathless One becomes the target of a spell or ability on your turn, transform it.

During your combat phase, after your opponent declares blockers, you may transform Zahel, Rancorous Mist.

It's a play off of Elusive Tormentor  Flip from Shadows over Innistrad, but made into a commander that can soak up a fair amount of removal, and recycle your instants and sorceries. That's build-aroundable, right?

I made sure he was killable by adding the "transform only if it's your turn" idea. In theory, you could attack while a mist, transform face up, then transform him again after the combat damage step to keep him protected. However, you can never deal the 2 base power in damage if you want to pump him during combat. Also, while hexproof, he is never indestructible, so boardwipes still work.

The rule you're looking for is this one:

In exile, the card is Elusive Tormentor  Flip.

Example, I get an Elusive Tormentor  Flip on the field, then flip it to become Insidious Mist . My opponent has an Anafenza, the Foremost on the board. I do nothing else and end my turn and my opponent responds by hitting the Elusive Mist with a kill spell which resolves, so the replacement effect exiles it instead.

In exile, is the card considered to be Elusive Tormentor  Flip or Insidious Mist ?

I have a few vamps lists in the back catalogue. I've tended towards mono-black because I like to pretend to be 'the rack' for bad matchups, but I've played with mardu too.

The big question is what payoff you are looking at. You can go anywhere from pure aggro to midrange value, and since so many of the pieces work well together, the majority of options are viable.

If you have even a modest collection of vamps you can always bring something fresh to FNM which plays off the same manabase and uses the same hand disruption. This means that there is a vamps list that will work well in practically any meta, and sitting down against vamps you could be facing almost anything from pure 'small vamps/discard/burn' aggro right up to 'solemnity/unlife/ad nausiem/blood baron'.

I'm gonna try and give a quick overview of sets of cards and what they do. None of these sets are perfect, so tournament play is patchy, but some may sit in your local meta in a dominant position- use judgement and don't be scared to mix and match.

With all the small lifelinkers ( Indulgent Aristocrat , Gifted Aetherborn , Vampire Cutthroat do a lot). You play a very grindy game going over most aggro with lifelink and under most midrange with sac value. Card filtering makes a lot of value here, and things like Bloodghast / Faithless Looting (despite the meta being all graveyard hate all the time) put a lot of work in.

Madness vamps has Bloodghast engines and obscenities like Olivia, Mobilized for War / Haakon, Stromgald Scourge for vampire knight tribal, and similar 'high synergy/bad combo' setups can pack massive amounts of hand disruptiuon while cheap lifelink/deathtouch gums up the board.

Gaining a lot of life with more disruption into cards like Blood Baron of Vizkopa / Elusive Tormentor  Flip is also viable, if you are comfortable executing a more old-school control list in your meta.

Human sac outlets into Falkenrath Aristocrat hits hard, but most of what it wants to do is done better by 'all vampires into nocturnus' lists the moment Mavren Fein, Dusk Apostle was printed.

If i have The Mimeoplasm enter as Elusive Tormentor  Flip can i use the discard effect to transform the Mimeoplasm into Insidious Mist ? If yes, does it lose it the counters it got from the second creature?

Your deck gives me a chance to suggest a card the I've wanted to use, but never quite seen the right setup for, but more on that in a bit...

Conventional wisdom is that you shouldn't mix creatures with infect and those without, outside of mana dorks. It is also that you shouldn't rely on auras, as they give your opponent a 2-for-1. Invisible Stalker though will wear any aura quite happily since it has hexproof, it also can't be blocked. A card like Slippery Scoundrel might also be ok, though 10 permanents is a lot. Neither of these were the card I mentioned in my opening, that card is Elusive Tormentor  Flip this card is interesting because it transforms into a 0/1 hexproof, indestructible, can't be blocked creature and can then be flipped back to deliver the 4 damage. It doesn't lose any auras attached when it transforms, so that means a 4/4 infect and the gag is you can transform it back to Insidious Mist in response to your opponents removal.

There is also a decent draw spell with proliferate Tezzeret's Gambit and proliferate on a stick Thrummingbird, both of these are worth consideration. 27 land is a lot, 23-5 would be fine and this gives you more slots. Your also wanting to play control, so Temple of Deceit or Fetid Pools is a lot better than Submerged Boneyard, Halimar Depths might also be worth considering. Moving on, a pump spell might be a good idea Virulent Swipe or Supernatural Stamina for example.

There are 2 cards in modern that wreck an infect plan Melira, Sylvok Outcast and Solemnity , so be aware and don't let these resolve... That's it from me, good luck and have fun brewing your deck.