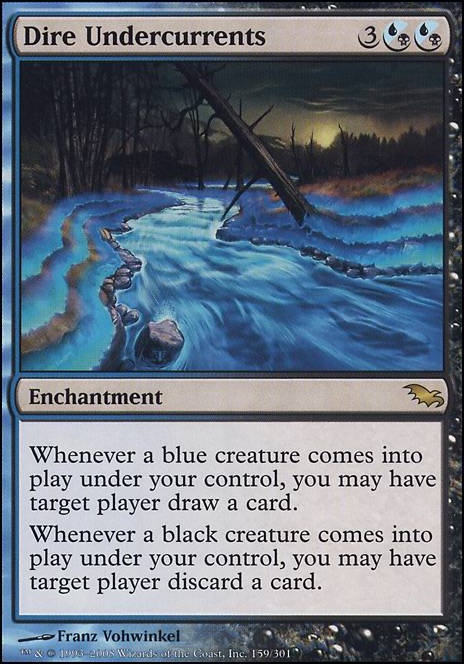 Whenever a blue creature enters the battlefield under your control, you may have target player draw a card.

Whenever a black creature enters the battlefield under your control, you may have target player discard a card.

Dire Undercurrents occurrence in decks from the last year

desmondwrite interesting question, I've struggled hard to find a way to draw efficiently. It needs a lot of works and that might be its big weakness. But the low CMC of the curve helps me get through the draw issuesÃ©

It is not premium draw options as we know blue can provide but it sinergize pretty well with my faerie/enchantement/artifact tribal as it brings lot of value. The deck overall is a very good performer on multiplayer table and is playable 1vs1.

Dire Undercurrents should not be overlooked. Practically everything you cast will net you a card in return.

you are missing Dire Undercurrents. Every token Alela makes nets you a card. Nice looking build. I myself went with a more artifact storm approach. Looking pretty mean with the enchantments here. How's it playing out for you?

Something to keep in mind, if you have Alela, Artful Provocateur on field, your Thopter Foundry and Sword of the Meek combo won't work because of Alela's anthem effect will make those thopters 2/1's.

You also can't go wrong with a few more cheap rocks. As you've seen, I'm a big fan of cheap artifacts and storming off to create a huge amount of faerie tokens. Another thing that can allow things to get out of hand with your Dire Undercurrents and Alela on board is Kindred Discovery. That's two cards per faerie entering the field.

As for cards in your maybe board, Mystical Tutor and Enlightened Tutor are something you want. You have plenty of targets for both that they will very rarely be dead cards. Bitterblossom has is a flavor win, and also has great synergy with Dire Undercurrents and if you choose to add it, Kindred Discovery.