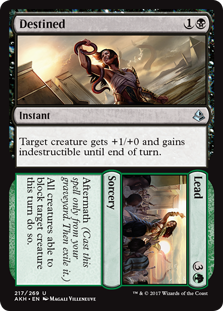 Target creature gets +1/+0 and gains indestructible until end of turn. 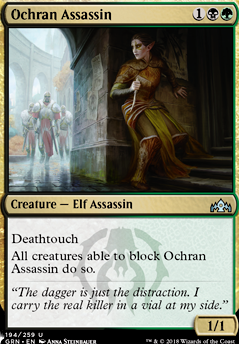 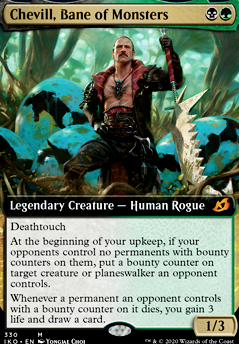 Are 17 lands really enough? Even with eight mana dorks? I'd be very surprised considering you're trying to play some pretty big fatties ASAP. I'd probably cut Cryptolith Rite for four more lands, since the creatures you'd be most willing to tap for mana already tap for mana on their own. Consider making room for a set of Llanowar Wastes, since the damage it deals to you shouldn't matter if you're trying to win by turn five.

I get the idea with Bioshift - shuffling the counters off someone about to die so all their build-up isn't wasted - but it might be more effective to just protect them with something like Vines of Vastwood, Destined or Assure / Assemble. After all, Bioshift is no use if you have zero other creatures!

Archfiend of Ifnir seems quite useless in this deck, you only have 4 cards with cycling. Why are you using so many artifacts that give mana? You can put some more -1/-1 counter synergy in it. Personally I would just skip the whole red part, since you can't use hapatra as your commander which is perfect for this deck since you will drop her on your second turn every game and you will start making tokens as soon as possible. To get synergy from the red you need soul-scar mage which you probably won't pull every game. I like the artifact vehicles idea!! Also Destined is excellent when you have deathtouch creatures

If you were worried about a specific creature getting removed, you could always use some counter spells or Destined.

The second part of the card forces all creatures to block just one of your creatures then the rest are free to do straight damage.

chadsansing Kizmetto, what do you both think after the changes?

And I must say. Destined/Lead has proven itself to be an awesome card. It plays so well in this deck. No I can't use Lead to get a lot of Polyraptor. But as long as I have enough creatures to kill my opponent plus one, I force them to block something weak like my Raptor Hatchling. Then I attack for the win. Destined has also proved to have many uses as getting a lot of Polyraptor or blocking with Ripjaw Raptor or Frilled Deathspitter to save myself for another turn depending on how close to death I am. I love blocking creatures with Double Strike this way.

Supernatural Stamina helps as well. Put that on my Forerunner of the Empire before I cast Polyraptor. I put another Poly or Hatchling on top and do it again.

Destined, Supernatural Stamina, and Without Weakness won't stop your Creatures from being Exiled.

They can still kill your Creature after you have used Supernatural Stamina on it.

Now that I'm thinking about it, you'd be better off staying in and using cards like Sheltering Light, Acrobatic Maneuver (which prevents a Creature being Exiled), Vizier of Deferment (which is excellent as it also stops Exile, and leaves behind a body), or Wispweaver Angel, although that last one is a bit costly in terms of CMC.

Dino decks are Creature driven decks. They want lots of cards that work to get them on the field.

They don't want many Non-Creature spells that do things like save them from death.

The idea is that you just have so many of them you can play, that it doesn't matter if some are gotten rid of.

That's why you use Ripjaw Raptor. Eventually your Opponent will run out of cards to kill your Creatures, while you keep drawing and playing more.