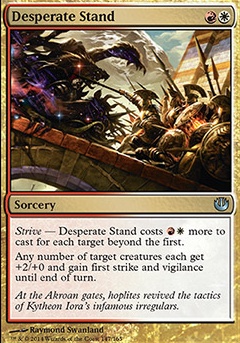 StriveÂ - Desperate Stand costs RW more to cast for each target beyond the first.Â

Any number of target creatures each get +2/+0 and gain first strike and vigilance until end of turn.

Quick, Fast, and in a Hurry (A)
by Nickosis

I really like to use Strive cards in my W/R Heroic deck: Launch the Fleet,Desperate Stand, Twinflame. You can effectively target all your heroics with them. Launch the fleet is particularly useful, for it brings out some nice expendable tokens. Also, Akroan Line Breaker is a ridiculusly useful card, another interesting combo I utilize is Anax and Cymede with cards that have Radiance, like Rally the Righteous, Bathe in Light and Wojek Siren for a quite literal board buff and finisher.

Akroan Crusader and Tormented Hero are not quite useful in this deck, primarily due to the fact that you have no spells that can target them, such as Desperate Stand or Rouse the Mob. Flamespeaker Adept also isn't as useful, because her ability says whenever you scry, not scry, it gains +2/+0 plus first strike.

Ogre Battledriver is a pretty good card for offensive tactics. You can also run Ashenmoor Liege. If you have big enough creatures, you can run Rakdos-style buff spells like Auger Spree to make it more hard-hitting.

For the moment, that's all the suggestions that I have for the moment. Hope they help to an extent.

If you're going to run Phalanx Leader, you'd might as well go all in heroic and run cards such as Akroan Crusader or Favored Hoplite and Strive spells such as Rouse the Mob or Desperate Stand. If that's not the case, below are some suggestions that may or may not help:

Assemble the Legion: What good is a Boros soldiers deck without it?

Tajic, Blade of the Legion: 7/7 indestructible when you attack with 2 creatures and Tajic, nuff said.

Legion Loyalist: Same reason as Tajic, except this time, all creatures gain first strike and trample and can't be blocked by tokens (RIP Selesnya and Populate)

Battalion cards in general, such as Boros Elite and Firemane Avenger.

That's all I really have to say for now, hope these suggestions help to some extent.

If you're gonna run Boros heroic you're gonna need a few things. First off, a few more heroic creatures would do nice. This isn't exactly a voltron deck so maybe bring the total number up to 23-25. Some good options are Akroan Conscriptor, Akroan Crusader, Lagonna-Band Trailblazer, Vanguard of Brimaz, and maybe and Arena Athlete Second off, your spells can be improved. Fall of the Hammer works great (at least better than Tail Slash). Desperate Stand wants to be in here. Strive in general is good. Third, I know this is a pretty aggressive deck and it has a fairly low average CMC, but you should be running at least 32 lands.