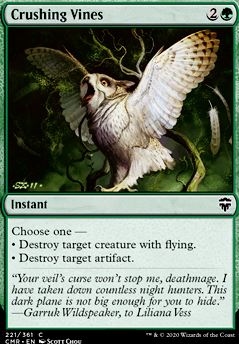 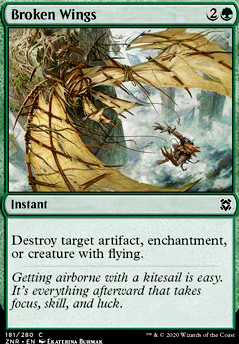 As for suggestions I feel like the deck doesn't have enough tribe members and some cards just have a better version like Crushing Vines should be Return to Nature the deck is also lacking a little bit in targeted removal.

If you want infect suggestions, Triumph of the Hordes is an obvious, Maybe Lost Leonin could be good both as a tribe member and an infect card Grafted Exoskeleton fits in infect and equipment

Love the deck and the new cat alts are great

there are a few cards that stand out to me as not fitting the deck's theme. Wing Shards is the first. if you run more than 4 other instants it would be a good include but if they cast spells after they attack (storm counts every spell, not just yours) then you might as well be running Rebuke. Crushing Vines is another one. sure it has utility in that it can also kill flying creatures, but it can't even hit enchantments. something like Krosan Grip is better in almost every regard, you could also use Return to Dust. White Sun's Zenith is a good card but its less good in this strategy. most equipment decks go tall rather than wide sometimes running as little as 1 or 2 creatures. in that same regard Jazal Goldmane would be good in a go wide strategy but not really in this one. a problem with these strategies it a vulnerability to artifact destruction. there are a few solutions to this problem. the first is to run something like Privileged Position to add a forcefield around all of your stuff. the second flickering your stuff. i recommend Teferi's Protection. you could use Eerie Interlude but it only does creatures. by the way, where is Lightning Greaves? it is probably one of the most played artifacts right before Sol Ring. while I'm here, where is sol ring? its regarded as the tenth power nine and is an auto-include in and deck no matter the strategy. it's just too good. it beats Selesnya Signet it every way except the fact that the signet produces colours mana which shouldn't be a problem since all of the lands you run either produce coloured mana or fetches coloured mana. by the way, I am NOT suggesting you cut the signet it is a very good card. while we are on the subject of mana I think we should address that Sylvan Scrying. if you are going to run that you need utility lands. remember, it says ANY land. that means if you need a Glacial Chasm you got it. if you want a Dark Depths to go with that Thespian's Stage viola. but the best you can get right now is a Myriad Landscape, a Path of Ancestry or a Krosan Verge. on the subject of lands it a two colour deck that runs a lot of artifacts. you can stretch the colours mana in your mana base a bit more I reckon. a good start is Blighted Woodland as if you don't really have anything exciting to do on your turn or just really need the mana you can spend the turn doing that. another cool thing to play could be, Shimmer Myr normally wouldn't play this as you cant equip at instant speed but Hammer of Nazahn means that you can flash it in with a bunch of equipment and have a surprise army to blow out attackers. some cuttable things are; Sun Titan, Sunspear Shikari, Regal Caracal, Skyhunter Skirmisher, Abundance, Wing Shards, White Sun's Zenith, Crushing Vines and Restoration Specialist

sorry about the really long comment I've just been fantasising about build a similar deck for a while.

Try to ramp as much as possible and some landfall creatures like Rampaging Baloths can bring great benefit of such sorceries even in late game. Also some mass removal like Monstrous Onslaught for mono green can be a bless.

For instants you might like to look at Evolution Charm, Setessan Tactics, Crushing Vines and Krosan Grip. In case your meta has lots of boardwipes consider Wrap in Vigor and Fresh Meat for cheap options.

As for enchantments, most good green enchabtments are expensive, but cards like Elemental Bond can bd crazy good. If you can spare $2 you could also get a Vernal Bloom.