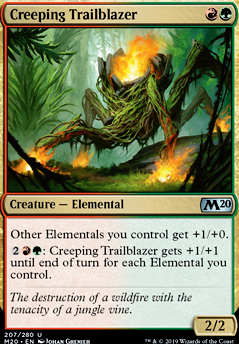 Other Elementals you control get +1/+0.

: Creeping Trailblazer gets +1/+1 until end of turn for each Elemental you control.

5C Horde of notions
by boguo 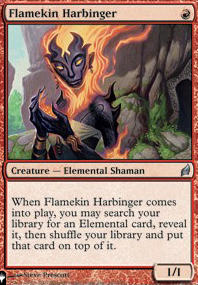 Omnath, Locus of the Land
by Takoa629

My Landlord is an Elemental
by breadysetgo

More ways to be able to play more lands is gonna suit ya here. Burgeoning and Wayward Swordtooth will help with this.

Leafkin Avenger will give you value off all your tokens, and Incandescent Soulstoke and Creeping Trailblazer buff that team.

mwalkner Good idea! I first had Creeping Trailblazer in the deck but cut it for Voice of Resurgence because of the amount of removal and interactive play in my playgroup, but it would fit nicely. Also Omnath, Locus of the Roil was once in the mix, but I noticed that the Landfall ability wouldn't have the impact I wished for, so I'll built another deck around this theme once Return to Zendikar drops. Phantasmal Image would also fit and streamline the deck, but I figured more diversity to be a little more fun :) Aether Vial is a beautiful busted card anyways, but -like you mentioned- way too expensive for my budget... Thank you for all the good input!

Creeping Trailblazer and Phantasmal Image are both really solid option, I play this deck in legacy and I love the shell a ton, if its ever in your budget Aether Vial and a one of Omnath, Locus of the Roil are great