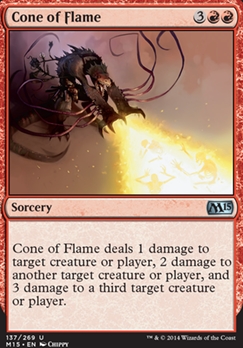 Cone of Flame deals 1 damage to target creature, player or planeswalker, 2 damage to another target, and 3 damage to a third target.

It's the Final Countdown! - Baron Von EDH
by Brimst0n3 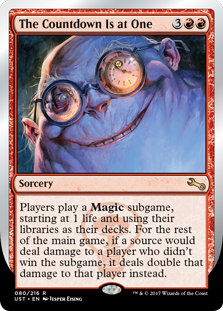 Neheb Burn One
by Chance777 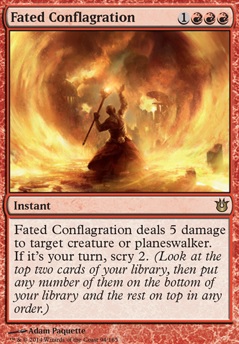 Epicgamer was that on purpose?

: ~ deals 1 damage to any target. Counter target activated ability of a permanent you control named Magus of the Flametwister.

Loosely based on Cone of Flame.

I'll do another iteration of Sorin vs Nahiri

As Sorin's Blade found home, so too did Nahiri's. It was over for them both, perhaps for the better of the multiverse... or worse.

Make an escalating spell similar to Cone of Flame but not damage.

I'll do another iteration of Sorin vs Nahiri

As Sorin's Blade found home, so too did Nahiri's. It was over for them both, perhaps for the better of the multiverse... or worse.

Make an escalating spell similar to Cone of Flame but not damage.

Gidgetimer on Why does Cone of Flame â¦

I am including CR 700.1 below as proof that a spell can cause multiple events. I don't think that you specifically would doubt this, but it heads off the question. Yes, it is basically that each clause is a different game event in this case. CR 608.2c tells you to follow the instructions in written order. This means that during the resolution of Cone of Flame you deal 1 damage as a game event, then you deal 2 damage as a separate game event, then you deal 3 damage as a third gave event. With Fireball you deal X damage divided evenly as a single game event.

608.2c The controller of the spell or ability follows its instructions in the order written. However, replacement effects may modify these actions. In some cases, later text on the card may modify the meaning of earlier text (for example, âDestroy target creature. It canât be regeneratedâ or âCounter target spell. If that spell is countered this way, put it on top of its ownerâs library instead of into its ownerâs graveyard.â) Donât just apply effects step by step without thinking in these casesâread the whole text and apply the rules of English to the text.

700.1. Anything that happens in a game is an event. Multiple events may take place during the resolution of a spell or ability. The text of triggered abilities and replacement effects defines the event theyâre looking for. One âhappeningâ may be treated as a single event by one ability and as multiple events by another.

Yesterday on Why does Cone of Flame â¦

I understand this, and when it came up it made logical sense to me, but I found that I couldn't explain it to my imaginary friend in actual words. Is there a specific ruling somebody could share with me that explains it? Is it just also the case that things happen in sequencial order when separated with commas?

It isn't quite as good as Lightning Helix since you only add 3 to red burn spells for each instance of damage they do, not 6. But yes, you name white (naming red doesn't work to make your life gain into bigger life gain since FS&SS deal the damage not the spell on the triggered ability) and then your burn spells deal 3 extra damage per instance of damage being dealt.

You may notice that I am being careful to say "per instance of damage". This is because FS&SS are going to trigger for each time you gain life, and different instances of damage being dealt are different instances of lifegain from lifelink. This means that Cone of Flame will give you three triggers, Fiery Confluence will give you a FS&SS trigger for each damaging mode you choose, Chandra's Fury gives you two triggers, and Fireball gives you one.

There's not much you can do with that unit, since it's one of the more basic SC units in the game, no abilities, no upgrades that change its role or function, etc...

For the next challenge: We may have done this series before, I can't remember. But if you look at Cone of Flame and Bestial Menace , they have CMC 5 and they both cause a thing to happen with a 1, a 2, and a 3. Let's turn this into a cycle. (Have we done this before?) So, create a black, a white, and a blue, that utilize the numbers 1, 2, and 3 in terms of the mechanic in the card.