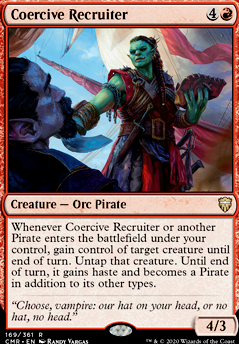 Whenever Coercive Recruiter or another Pirate enters the battlefield under your control, gain control of target creature until end of turn. Untap that creature. Until end of turn, it gains haste and becomes a Pirate in addition to its other types. 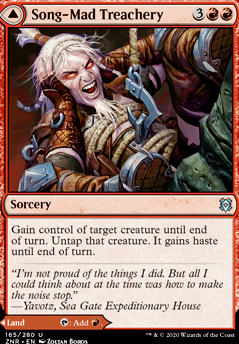 Might I suggest the new Coercive Recruiter? It essentially does the same thing that Zealous Conscripts does when paired with Kiki-Jiki, Mirror Breaker but also steals the entire board of their creatures too, considering each token copy of it that enters is considered a pirate.

Yes, I can recommend building this deck if you do not plan to go infinite :). The value you are going to get through treasure with this deck is going to be a lot of fun also without combo. Not sure I would lean to that Thermo-Alchemist-spellslinger path though. Focussing on Mechanized Production/Hellkite Tyrant and Voltron might just be all you need, maybe adding some more counterspells to protect those wincons. But adding some more pirates sounds good too!

If I had to alter my list, I would likely remove Havoc Jester, Reckless Fireweaver, Arcane Adaptation, Coercive Recruiter, Curiosity and Sigil of Sleep. That gives you quite some spots to round up the deck in another way. Glint-Horn Buccaneer you can keep in the deck if you can agree with your playgroup you wonât use it to go infinite. If you only use it once a turn for example, itâs still a very good card in the deck I think.