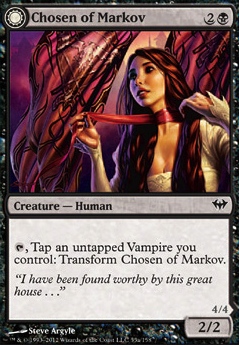 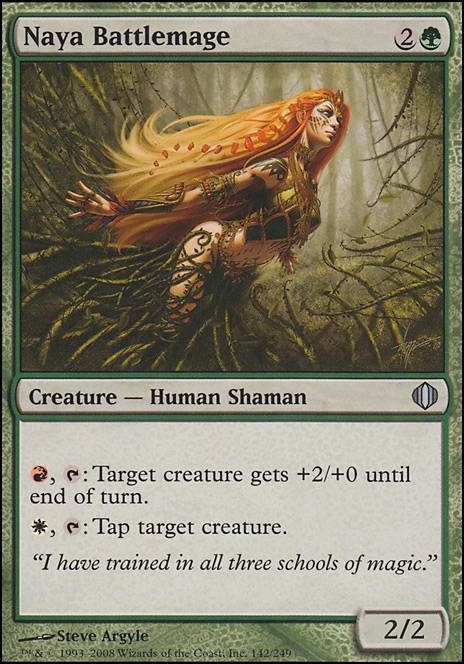 Chosen of Markov  Flip is great on both sides!

Mark of the Vampire, Blade of the Bloodchief, Mirri the Cursed, Falkenrath Marauders, Mephidross Vampire (too expensive for the effect, not running non-vampire, already have too many +1/+1 counter dumps) and (especially) Chosen of Markov  Flip. Overall, seems like there are maybe 5-10 too many creatures, with quite a few high curve ones that kinda just do nothing.

Urge to Feed is not strong enough in edh, I think. -3/-3 doesn't kill enough things that I would care about.C0Need Chaos Warp to deal with Enchantments. Remember my red/black deck a couple weeks ago? Chaos Warp is the only thing that can deal with stuff like Humility which halts your deck completely.

Not sure if you need as many +1/+1 counter generating vampires to spread over your team, since many do nothing without a big boardstate (same with Vampiric Fury, which is a dead draw when you only have one or two creatures on board). At least the curve is low (could be lower, still).

This is a deck that is pretty weak to boardwipes but desperately needs one or two. It is somewhat resilient to wipes due to a lower curve, but I don't see any recursion on board. Most of the combo-y and synergistic vampires are magnets for removal, so having a way to give them another chance will be a strong play and is on theme with vampires (Gotta do specific things to kill them, so they keep coming back).

You don't have enough removal or discard to set Bloodchief Ascension off, and you don't run Mindcrank to make it a win-con combo, so I would cut it.

Hammerheim is a really cool land.

I also like the Indulgent Aristocrat. If you do add some recursion, I would only consider adding maybe one more sac engine with him and Kalitas, and that is Ashnod's Altar, simply because it can ramp you extremely fast and let's you get value out of weaker vampires that don't help much in the late game. They can contribute to a big Exsanguinate or some other bombs you need to cast.

I think Voldaren Pariah  Flip is pretty good for a big drop flavor-win that actually impacts the board unlike a couple of the above cards. Since you are in tribal, Urza's Incubator is surprisingly absent.

Quietus Spike is something I see in a lot of lists for vampires. Seems good and on theme.

Maybe Door of Destinies? Gives you room to cut some of the +1/+1 generators.

No Rakdos Signet? Not really much ramp in general, but at least run that, surely?

Dreadbore is too good to not include, especially without the off-theme Hero's Downfall. Ruinous Path looks like there is a Vampire on the art.

Blood Seeker is amazing vampire tech. It prevents opponents from making infinite tokens, recasting creatures infinitely (read, Palinchron and Triskelion), and gradually makes the opponent suffer for playing their cards. It is a two drop, also. Brutal against most decks, including competitive ones.

Bloodghast is pretty good for a do nothing type of creature that is hard to get rid of. I probably would only consider him for Contamination, but some of your sac engines might like him. I doubt you should put him in, but just throwing that name out there.

Asylum Visitor seems great if you do expand to a discard theme. I wonder how often it is a dead draw without the discard, though. Might still be good.

Stromkirk Occultist is the boss. Get that card.

Viscera Seer is also a Vampire. I still need one of those, myself.

Obelisk of Urd is interesting.

Okay, I am done typing.

You definitely have a good start here. I'm going to second buildingadeck's advice, you really don't want more than 60 cards and the more copies of your main players the better. It's very hard to stick with that rule when you first start building decks, I know. To decide which ones have to go, look at the casting cost compared to what it does for you snd how many other cards you have that do the same thing better. Looking through these, I suggest considering the following for removal: Banshee's Blade, Shield of the Avatar, Mark of the Vampire, Balustrade Spy, Falkenrath Noble, Markov Patrician, Murder While that Bloodline Keeper suggestion is super sexy, you can also do more with the cards you already have. Consider replacing Chosen of Markov  Flip with Butcher of Malakir, Feast on the Fallen with Vampiric Link, Urge to Feed with Dark Ritual. Either get at least one more Chariot of Victory or consider cutting it. Others that are worth investing in more copies: Gatekeeper of Malakir, Kalastria Highborn, Quag Vampires These could replace Shadow Alley Denizen and Vampire Interloper.

Hey, usually when I'm trading non-standard cards for standard cars I expect the trade to be tilted in my favor. so how about this:

Your Gideon, Ally of Zendikar and Kalitas, Traitor of Ghet for my Sigarda, Host of Herons, Angelic Destiny, Tree of Redemption, Chosen of Markov  Flip, Angelic Overseer and Olivia Voldaren.

That's all I have from your wants that I can put into this trade. I think this is around $5 in my favor so let me know if there's something I can add to balance it a little more.

Chosen of Markov and Linvala, the Preserver, hands down.