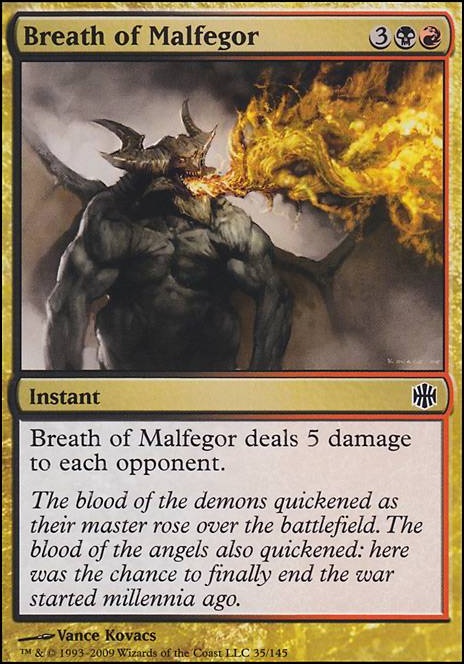 Breath of Malfegor deals 5 damage to each opponent.

Breath of Malfegor occurrence in decks from the last year

goblin berserker and merfolk wizard walk into bar
by Stayslacking 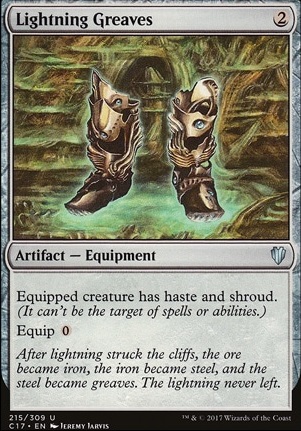 Yes, Breath of Malfegor and Fated Return were absolutely the right cards to cut.

No problem, man. It's always hard to say what is good and what isn't without actually playing the deck, but honestly Paradox Engine feels a little underpowered here. You don't have a lot of tap abilities aside from your mana rocks to really abuse it, but with Dralnu and Wort it's probably fine.

Also Breath of Malfegor, Trail of Evidence, and Intimidation Bolt seem a bit underpowered compared to some of your other spells. Maybe Boros Charm as well, but cutting all the lower cost stuff seems iffy. In the end, it's up to you, and you've played the deck, so it's your call. My rule of thumb is just cards that have felt awkward to cast get cut, even if I love them.

Although I could see Trail of Evidence and Paradox Engine being game-ending if they're on the field with Inspiring Statuary. Although that might get a bit oppressive, depending on how your playgroup is. Something like that isn't "infinite" but it's going to end the game long before you ever run out of mana, unless someone's gained just an absurd amount of life.

This deck looks awesome tho, man!

Breath of Malfegor have you thought about this one?

But i think Hall of Triumph is not good in 3c Decks. Try Always Watching .

And i dont get your Commander choice. I dont see him synergies to well whit your deck.

Same whit Day of Destiny you only have 7-8 targets i think a Coat of Arms is much better.

I dont see the Planswalkers work whit our deck. maybe try Walker like:

~ Army of the Damned

-- Howl of the Horde you have almost no creatures, replace with Fork or Wild Ricochet something

++ Rise of the Dark Realms

++ Nicol Bolas, Planeswalker, Time Stretch, and Mystical Tutor if you can afford them

There are a lot of cards here I would cut!

Painful quandary and pain magnification are pretty sketch. Also lol at the guy saying to cut syphon mind for pain magnification, neither card is great but syphon works immediately and draws you cards. Pain mag may or may not do anything, slowly.

I think all the draw + punish players for drawing stuff is pretty bad as individually the cards are fairly useless and even together all you accomplished is playing some Breath of Malfegors? I would cut molten psyche, teferi's puzzle box, spiteful visions

This deck is really slow, I don't think cards that damage all players are that great of an idea because you can easily fall behind in a damage race. Gray Merchant of Asphodel does good work keeping your life total higher.

In general I think you should decide if you want to attack player's life totals or their resources and mostly focus on one or the other. Tainted aether and furnace of rath are doing different things imo.

I would definitely make room for Nihil Spellbomb

For more ideas check out my kaervek edh deck here, it's goodstuff and cards I think are just cool but you can find some efficient cards there

The Pits of Angband

seshiro_of_the_orochi thanks for the suggestion i was looking at that earlier and thinking between that and Breath of Malfegor but trying to keep my spell cost avg CMC low so might side it.