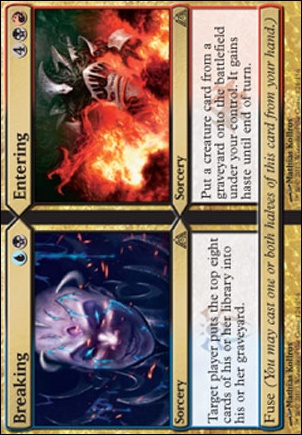 Target player puts the top eight cards of his or her library into his or her graveyard.

2 more copies of Glimpse the Unthinkable is to costly and Traumatize was going to be replaced with Maddening Cacophony the moment that tapped out considered it modern legal.

The plan is to by turn 3 and 4 either transmute for Fraying Sanity or play fraying sanity, allowing a draw out for the opponent after you play Traumatize.

If you don't get Traumatize, Fraying Sanity with cards like Glimpse the Unthinkable and Merfolk Secretkeeper allow an alternative win.

I have considered Breaking but after Maddening Cacophony showed up, I thought it wouldn't be worth it.

I have a non-budget restricted version of this deck, but it is private and still in development.

Iâm not an experienced magic player, and I only recently constructed my first mill deck, but it occurs to me that it might be a better idea to include 4 copies of Glimpse the Unthinkable and drop Traumatize down to 2. In a dream scenario where you play Traumatize as early as possible and 4 turns in a row, youâll first mill about 25 or so cards. Next turnâs Traumatize will only mill around 12 cards, then each subsequent casting will mill 6 then 3 cards. In other words Traumatize becomes orders-of-magnitude less effective each time it is cast. Once or twice per game is sufficient; itâs more cost effective to cast Glimpse the Unthinkable multiple times, or other mill spells like Breaking or the new Maddening Cacophony.

Breaking would be good here. Fraying Sanity should be a must for all mill decks.

Breaking would be good for this deck too.

I took out the 4 Darkness for 3 Drown in the Loch +1 Surgical Extraction and replaced Mind Funeral for 3 Fatal Push +1 extraction.

I want to play burn. I put 3 Extirpate in the side for vs burn matchup but want something better.