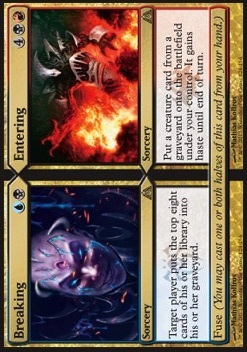 Target player puts the top eight cards of his or her library into his or her graveyard.

Put a creature card from a graveyard onto the battlefield under your control. It gains haste until end of turn.

Mill Em All
by MaliciousMayhem 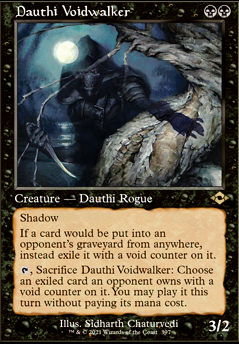 Breaking / Entering isn't a card that's technically legal in a dimir deck. house rules and all that means it depends on playgroups but in general that's a no-no.

To save money you can use Breaking / Entering instead of Glimpse the Unthinkable.

Do you find Traumatize and Jace, Memory Adept to be too slow? I haven't tested this deck, obviously, but 5 mana seems like a lot in a deck with 21 lands. I would want to run 2 more lands and another Breaking / Entering.

Also, have you considered adding a white splash for Kaya, Orzhov Usurper in the sideboard? She can help keep you alive against aggro and burn.

Also note that the actual average converted mana cost woeuld be 2.725. This is because there is no intent on playing the "Entering" side of the Breaking / Entering card. Having the highest converted mana cost be 5 is a big deal and nearly guarantees the ability to play 1+ cards per turn.

ignore Breaking / Entering as you have no Black mana. My Bad.