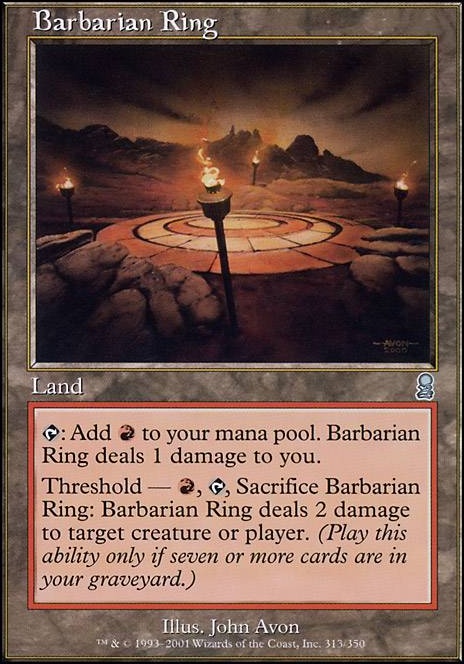 : Add to your mana pool. Barbarian Ring deals 1 damage to you.

Threshold â, , Sacrifice Barbarian Ring: Barbarian Ring deals 2 damage to target creature or player. Activate this ability only if seven or more cards are in your graveyard.

Akiri, Warsong of the Sky Ruin
by ghostfire86 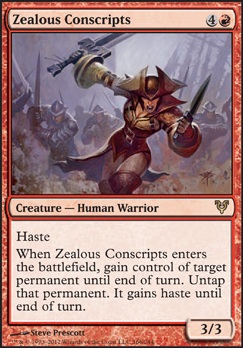 Nixin72, you scared me when you started to act concerned about a burn deck "burning out quickly" or having to "maintain a board presence", but I see what you mean and I quite agree. Though I hope the burn deck is not trying to play any sort of long game both Monastery Swiftspear and Eidolon of the Great Revel are very powerful tools.

All that I am trying to say, purely mine own opinion on burn, is that sacrifices of raw power and damage for some sort of elusive long-game advantage are rather foolish most of the time. In the case of Monastery Swiftspear in particular however it is such an amazing card, it and eidelon can snap up those Spark Elemental and Keldon Marauders spots.

as for lands, one that you may want to consider is Barbarian Ring . a more freeroll card can never be found, and having such reach can be very good. The same logic sort of applies to Ramunap Ruins , though I would be careful with 5 mana Shock s.

Good luck and a +vote

Thanks for the advice, ClockworkSwordfish!

Ramunap Ruins is more money than any of my other cards (my highest is Rolling Earthquake at $.69); I think it might just be too expensive to run if I want to keep a sideboard... I might play around with Barbarian Ring though. I am already at budget so I would have to take several things out for it to fit but it might be worth while. As you mentioned, I also just really don't want to shoot myself in the foot with a underpowered Landslide in the late game. Also, like landslide, it doesn't scale well in multiplayer matches so that's something to consider.

Thank you again! You've given me a lot to think about!

Even considering the inclusion of Landslide, you might find it worthwhile to replace a Mountain or two with something like Barbarian Ring or Ramunap Ruins. You never know when you'll be short that last point or two of damage!

I read that post and I disagree with Flash being banned over Protean Hulk . And I get the reasoning for it - it would better if we didnât have to ban deck archetypes outright and Flash makes everything too consistent and fast and easy to hold up counter magic.

I would however argue that this makes Hulk decks easier to stop if you are running a blue deck, but harder to stop if you are running a non-blue deck. My best answers to stop Hulk is Red Elemental Blast , Pyroblast and Nevermore and if Flash isnât in the picture Iâm going to need to board more niche answers possibly over the red counter spells Iâd need for other blue decks just to impact hulk decks. Without Flash hulk players will only run a wider array of cards to get the combo going that can make the combo less interactive for non-blue decks. For example if the Hulk player wants to kill their Hulk with say Altar of Dementia thatâs fine, I run enough Disenchant effects to stop it before it gets to that point, but if they sac the Hulk with say Diabolic Intent Iâm boned. Having more ways to start the combo may be less consistent for Hulk decks, but its a major headache for people without all-purpose counter magic.

Iâve never liked Hulk decks for the longest time and if you had to ask me I would tell you they should have either banned Protean Hulk or at least ban Grand Abolisher , because I hate running cards like Faerie Macabre , Ghost-Lit Raider and Barbarian Ring just to interact around it. Now that Thassa's Oracle is out I donât think thereâs even much reason to use Grand Abolisher over how good the oracle makes the deck which terrifies me honestly. Removing Flash is a major setback I agree, but I canât help but feel that there will be cards printed in the future which will make the Hulk easy to cheat into play yet again. Not as easy as Flash , but enough for it to be a concern in the meta like it is now. My argument is unless non-blue decks get better answers that arenât incredibly niche I think Protean Hulk should get the ban hammer now. Whether Flash gets banned or not Iâve decided Iâm not going to even address combating this deck archetype anymore when deck-building, because it just makes my deck useless against every other cEDH deck Iâm up against if I have to run so many janky answers.

Why no Pyroblast or Red Elemental Blast ? They let you force your commander through as well as an answer to the afformentioned Flash shenanigans.

Barbarian Ring can help you stop a lot of combos, even through a Silence or a Grand Abolisher

Dire Fleet Daredevil while not a goblin, could allow you to win from your opponent's yard by playing non red things. I'm not super sold on this, but it is an idea.

By Force could be considered depending on meta.

Gemstone Caverns could also be a nice bit of ramp. All but 1 of your lands produce red mana as it is, so adding another that can either just be colorless or potentially ramp and give red I think is worth it. Plus you have moons to turn it red again later anyway.