When Atris, Oracle of Half-Truths enters the battlefield, target opponent looks at the top three cards of your library and separates them into a face-down pile and a face-up pile. Put one pile into your hand the other into your graveyard.

Atris, Oracle of Half-Truths occurrence in decks from the last year 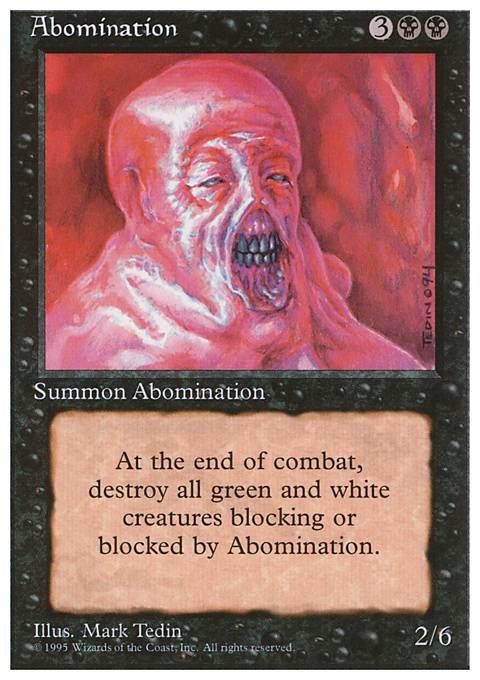 Oops all comander
by WAMMMU

The deck aims to take advantage of ETB triggers. We can repeat them with Thassa, Deep-Dwelling, Conjurer's Closet and Panharmonicon.

There are some powerful (infinite) combo's in here that can close out the game:

Duskmantle Guildmage + Mindcrank = infinite mill. With Memory Erosion on the battlefield this combo is even easier - as in, less mana intensive - to pull off.

Peregrine Drake + Archaeomancer + Displace or Ghostly Flicker = Infinite mana. Once we have infinite mana we can continuously blink Mulldrifter or Atris, Oracle of Half-Truths to draw our whole deck. Before winning with Jace, Wielder of Mysteries or Thassa's Oracle. Alternatively, we can mill all our opponents with Sphinx Mindbreaker (possibly turning it into damage with Mindcrank), or steal all our opponent's permanents with Agent of Treachery.

Of course, it is also fun to not combo off and just fill our opponent's graveyards, resurrect their stuff under our control and kill them with their own creatures.

Recently, I have been putting a lot more effort and time into turning this deck into Atris, Oracle of Half-Truths. If you are looking for a more competitive deck, I would turn to that deck. The addition of black gives more potential tutors, removal, and combo pieces. Thassa, Deep-Dwelling is much better at going long game, and grinding out opponents, while Atris, Oracle of Half-Truths is more about executing a combo as fast as possible, and as consistently as possible, all while slowing down your opponents. If that is more along the lines of what you look for in a deck, I would recommend looking at my Atris, Oracle of Half-Truths list. Don't worry though, Thassa, Deep-Dwelling is not a dead deck yet, and I will continue to improve it as new sets release.

Sorry this one's late, but it's fun, I promise.

Cast Atris, do his ETB trigger.

Cast Tempt with Reflections, creating a copy of Atris. Everyone else decides whether to take an Atris copy (encourage this and be nice about it, it's really funny when they take it). For everyone that takes it, you get another Atris. All triggers go on the stack, everyone gets tons of Atris triggers, and you end up with a massive hand and everyone laughs because it was fun! (Hopefully).

Whenever an opponent separates cards you own into piles, create two 1/2 blue Homunculus creature tokens and Fateseal 1.

I love complex cards like Chains of Mephistopheles, which I hope one day to buy. So, here's a card for an Atris, Oracle of Half-Truths deck, lol...

I'd like either a Fortification Darksteel Garrison or another Planeswalker Equipment.

I like the addition of Oko in here as an annoyance who can just keep coming back. I also didn't know Gravebreaker Lamia had that second ability, so I'm going to have to add it to my Muldroth deck right away!

I notice you run several more spells. I understand the counterspells as necessary interaction, but some of the others might be able to be replaced by recurrable (if slightly less efficient) permanents.

With Atris, Oracle of Half-Truths you can get a mini-Fact or Fiction that you can recur each turn.

I also like to run permanent-based ramp like Diligent Farmhand and Springbloom Druid over spells like Farseek since they offer a chance to be reused once Muldrotha comes out.

Sorin_Markov_1947 wont lie I am a huge fan of saheem and the overall esper midrange/control archetype. Am looking into making the curve smaller but I do personally like the use of Lochmere Serpent . Saw the potential the moment the first batch of theros spoilers came out so the graveyard will matter a lot. Looking into slotting Kunoros, Hound of Athreos somewhere in the 75 as I just adore Grafdigger's Doge. Could also see slotting Deputy of Detention . But after playing some practice games with Atris, Oracle of Half-Truths I just fell in love with it. But only made minor adjustments to fit some grave hate main board in anticipation for the beginning weeks.