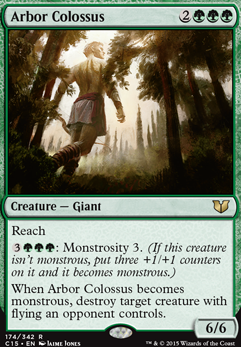 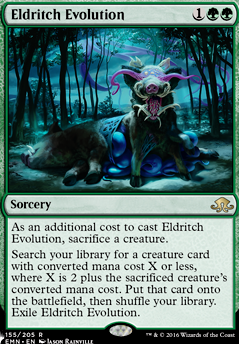 BOREALIS: Guardians of the Forever Forest
by sholland91

Welcome to The Jungle
by Fives95 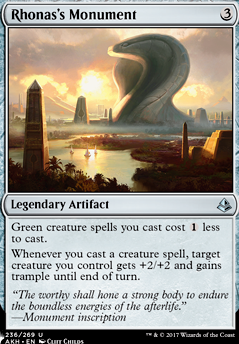 I dunno, man. I'll tell you one thing - I really love Vorapede. I used to keep 1 in the deck (or sideboard, i forgot) when I first discovered it because it just seemed so good, but if you want an answer from my purely competitive standpoint I would say they just cost too much mana. The lower-cost creatures in the stompy deck are so good already at beating the opponent's face in, lol. Especially with all the help from the Rancor/Aspect/Vines etc. Then again, you just told me they have been working for you. If they are working for you in your specific play group /local meta then by all means, continue using them. One thing I would still recommend is to TRY replacing them for a more streamlined deck (4x the main creatures and like 1 or 2 flex 2-or-3 drops).

You could always try building a hybrid stompy/devotion style deck with mana dorks and all the good 3 drops (4x Leatherback Baloth , 4x Steel Leaf Champion -- possibly even Arbor Colossus , Rhonas the Indomitable and/or Nylea, God of the Hunt , Gigantosaurus , Verdurous Gearhulk and the brand new card Awakening of Vitu-Ghazi , etc etc etc.). And more than 1 Ghalta, Primal Hunger . It's a little awkward with only 4 elves as mana dorks, though... so you'd still wanna try and play some experiment ones or pelt collectors, I'd assume. But, I dunno. As I type this I feel more and more like this would just warrant going full Devotion and breaking from the earlier game plan with smaller creatures and more to playing cards like Nykthos, Shrine to Nyx , Genesis Wave or that brand new card Finale of Devastation , etc...

I saw your update. and that was the first time I saw Whiptongue Hydra . My reaction was: "WHAT. That's OP" but then I read that it destroys ALL creatures with flying. (it still isn't bad. And maybe even better than Arbor Colossus )

I recommend Whiptongue Hydra, Arbor Colossus and Silklash Spider as great beaters that shore up the weakness to flyers.