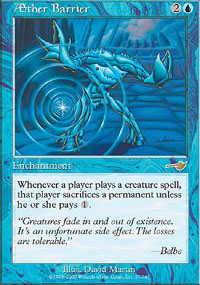 Whenever a player plays a creature spell, that player sacrifices a permanent unless he or she pays (1).

'I roll the nickles...'
by stabmaster_arson

Hey there Epicurus, this gives me a TON to think about, thank you! I really like the look of AEther Barrier and Sylvan Safekeeper but the shroud part of safekeeper worries me for of course the same reason as Lightning Greaves , and Aether seems a bit risky with my dorks, and things like Giver/ Mother of Runes , etc. However, Stonewood Invocation , Guardian Augmenter , and Ghostly Prison appeal to me greatly, with Swiftfoot Boots coming a close fourth, and I think all most definitely deserve a spot though I'm struggling a bit with the cuts. (By the way I do have Bastion Protector in the deck). Green Sun's Zenith is kind of dumb yeah, it was originally for my dorks and Dryad Arbor but after arbor got cut I kind of forgot about it, and it definitely needs to get out for sure- yet, the deck needs at least one more unblockable spell and I was thinking about cutting it for Infiltrate . Besides this though, I think I can definitely cut Mammoth Growth for Stonewood (Mammoth is a bit slow, especially if you just drew it and need to play it, and the deck relies on speed), leaving Guardian Augmenter and Ghostly Prison for my top scorers, though there are a ton of others you suggested I have to look into. I'll see what I can cut for those. Thank you very much!

Nice build, very creative. Damn, that was a lot to read through, haha.

My impression is that it doesn't have enough protection. The one card that I see in your maybe board for that which I like is Stonewood Invocation , since it doubles as a pump spell. But I would also like traditional protection cards like Heroic Intervention and Swiftfoot Boots (you wouldn't want Lightning Greaves , since they would prevent you from pumping Rafiq). Some other less standard protection cards might include Sylvan Safekeeper , Bastion Protector , Guardian Augmenter , and Shalai, Voice of Plenty . I would maybe pull from your mana-ramp to make room for at least a couple of these, since your mana curve is so low, and your pump spells are so cheap.

As for the disruption category, if it were my deck, I would do it differently. Blue and white have all of the best tax spells. It would take a novel to list them all, but for this deck I would include Ghostly Prison , Propaganda , Kataki, War's Wage , AEther Barrier and Norn's Annex , as well as artifacts like Crawlspace , Defense Grid , Damping Sphere ... this list could go on forever. And I like that you included Silent Arbiter , which makes me want to recommend using Dueling Grounds as well. Especially if you can fit in that Maze of Ith on your maybe board.

And finally, I'm confused by the inclusion of Green Sun's Zenith . What are you searching for with it? Your big pounder is in the command zone, not your library. Are you tutoring mana dorks with it? It doesn't seem entirely necessary. Maybe you can explain the reason to me that I'm not seeing. Frankly, I'd replace it with another land. You only have 32 of those.

Hope any of that helps. Cheers!

Vadrok looks really sweet and fresh! Iâve been brewing it after seeing your requested commanders video.

My comfort zone is green creatures, stompy, and overrun, so I might use this to branch into a stax/control style. Itâd punish crazy ramp and board states, bringing them down to my level, whiteâstyle. Recurrable ones include Restore Balance , Smoke , AEther Barrier and Soul Barrier , and your Culling Scales . Some cost more than 3 but are still effective - Damping Engine , Portcullis , Noetic Scales , Incite Rebellion .

I guess from there, win by attacking? Or find a combo. Itâs a case of decision paralysis atm, but itâll be easier to shave down once I decide on a direction.

Ok, makes sense, I've just found Ivory Tower to be less of a removal magnet in my playgroup while accomplishing most of what Venser's Journal does. Beatismcscoots I've been running AEther Barrier, Vile Consumption, Tainted AEther, and Lethal Vapors as more budget creature hate cards in my deck. lethal vapors vapors isn't the best but making people skip their turns is always funny to watch. Just some cards to think about.

AEther Barrier seems weak unless I'm missing something? cEDH doesnt run too many creatures outside of certain builds, unless this is a meta call?

While not a wall Archangel of Tithes is more tax and Mana Tithe is good. While more control than tax good old Grand Arbiter Augustin IV can help slow down aggro deck even more. And AEther Barrier can help you get rid some nasty things but it hits you as well so be careful with this one and In the Eye of Chaos , but both may help you in a pinch

I was thinking the best would be either Aegis of Honor or AEther Barrier , as well as Baird, Steward of Argive for maximum nope.