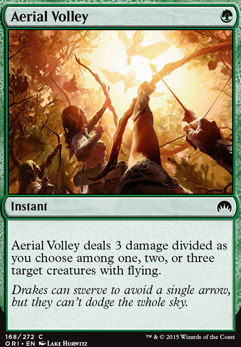 Aerial Volley deals 3 damage divided as you choose among one, two, or three target creatures with flying.

Flooremoji Hmm, interesting. I have choices I have debated for flyer removal:

Which do you think is best and why?

@Wyrmweird: What's your sideboard look like? I stuck 2 Overgrown Tombs in mine, with some Abrupt Decays and Dismembers. That helped a lot when dealing with not just flying, but also a wider variety of threats.

I've also thought about using Hurricane. Not only can you wipe the entire field of fliers, you can also use it as a finisher on your opponent. Corrosive Gale/Firespout/Skyreaping/Windstorm are the other wrath effects. There's also the Hurricane effects on things like Tornado Elemental.

Bow of Nylea is another option, especially since it does so much stuff.

Otherwise, you can go with Plummet, Leaf Arrow, Take Down, Wing Puncture, or Aerial Volley.

I'm partial to using a creature, though. It means you can get it by using Summoner's Pact, Lead the Stampede, etc. Silklash Spider, Arashi, the Sky Asunder, Cloudthresher, and Tornado Elemental are what exist in Modern to my knowledge.

Jagged-Scar Archers is also bonkers, but it needs to tap in order to do its thing. Probably best if you're using Thousand-Year Elixir.

Ramp up the Volume

+1 For a creative and spicy brew in modern.

I have been searching for a proper home (NON STANDARD HOME) for Cryptolith Rite for a short while now.

I also love pauper which initially drew me to your deck, because of Rolling Thunder.

Bad News: Modern is getting faster and faster. I suggest +2 Feed the Clan in the main to improve the aggro matchup. One card is going to bite you in ass and you just have to hope you do not get paired against Grixis Delver or a Jeskai Tempo deck here. THe combination of Remand and Snapcaster Mage can brutalize Ramp decks.

Good News: Similar to tron your T3/4+ plays are amazing.

+4 Aerial Volley This card is a staple from Pauper. For a G mana you can blow out a delver player. If you are combating delvers, V. Cliques, and other flying menaces this SB card is for you.

+1-4 Crumble to Dust are you dying to GX tron, creeping tar pit, celestial colonnade, or other annoying man lands. Here is your answer

+1-4 Blood Moon you have a lot of basics and you can play a haymaker that kills tron, disables jund, disables abzan, and hurts many three color decks.

kloac since I have no 3 CMC cards I prefer Evolving Wilds to Jungle Hollow because if I cheat on lands (WHICH I AM) I can use the scion tokens to make sure I play 2-3 spells in a turn. It is very important for my deck to have at a minimum 2 mana in play and the first two lands are generally one Swamp and one Forest the third land I prefer to be a Swamp in grindy matchups where I want to play loads of removal, but the third land is a Forest if I want the 2/2 Wolf, 3/3 Boar, +3 +1/+1 Counters beat down against relatively creature less control decks.

Altar's Reap look really interesting considering the deck has zero draw and plays off the top. I would most likely put the Altar's Reap as a 2 of in the SB to pair with the playset of Aerial Volley in order to improve my Mono Blue Aggro matchup.

THE SPICE:2 Feed the Clan there is a ton of super aggro and sometimes gaining a surprise 10 out of now where is a recipe for success in any match.

Thornbow Archer is almost a 2/2 for 1 black. While costly, Eyeblight Massacre is on theme and takes care of token strategies as well as other tribals it also doesn't target so it gets around hexproof. Running something at least similar to Aerial Volley is also a good idea against flyers which the deck otherwise struggles with. Adding a sideboard for these more situational but useful cards is probably a good idea