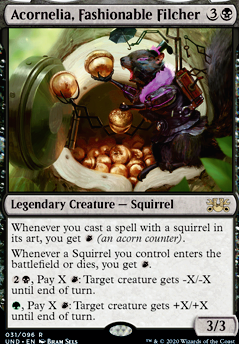 Whenever you cast a spell with a squirrel in its art, you get [symbol:A] (an acorn counter). My Squirrel got rabies
by WeabooKing

The Swarm goes Nuts
by Housegheist 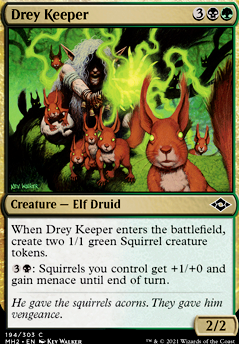 Squirrels are nutty
by TheRandomeDud3

Sorry for doubleposting, but i can't edit for some reason... if your playgroup doesn't mind plaing Silverbordered or Cards from Un-Sets, Squirrel Dealer , Acornelia, Fashionable Filcher or Earl of Squirrel would be some nice and flavourful additions.

Squirrels are one of if not the single most Iconic MtG creature types. If you've played the game for very long at all, chances are you've heard the tales of the exploits of 15 flying squirrels, you've probably met one of the people at every LGS that has a squirrel EDH deck helmed by Earl of Squirrel , and you might have even built a squirrel deck yourself.

Excuse my ignorance, but "Rx" is out of my vocab on MTG stuff, I can only think of maybe , so if that's what it is, then great!

Hollow, Guardian of the Forge

Whenever ~ enters the battlefield, choose one:

Target creature does not untap during their controllers next X untap steps;

Target creature that has power X or less gains haste. After this phase, there is X additional combat steps, followed by main phases. Whenever that creature deals combat damage, reduce it by half. Round damage dealt rounded down.

A weird set of effects on one card, I'm sure. I'm not aware of an ability that is worded quite like the second one, however taking into account Urabrask the Hidden's abilities, it seemed fitting this card would do something similiar, yet a little different. Let me know what you think!

As for the challenge, create either a new Koth of the Hammer or a Squirrel Commander other than Acornelia, Fashionable Filcher

Look at all those Squirrels!!!!

Splashing black for Acornelia, Fashionable Filcher seems like a good move. It's not too ridiculous and is compatible with black bordered cards, so players might be okay with it. Also, MaRo himself considers Squirrels primarily silver bordered, judging by his Ikoria teaser. A sideboard really is just a pile of graveyard hate, color hate, artifact and enchantment removal, and hyperspecific STAX pieces.

What are cards with squirrels in their art?????