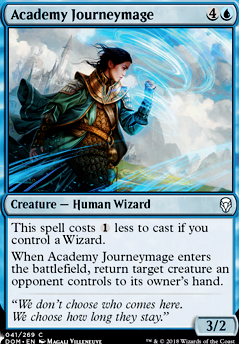 When Academy Journeymage enters the battlefield, return target creature an opponent controls to its owner's hand. 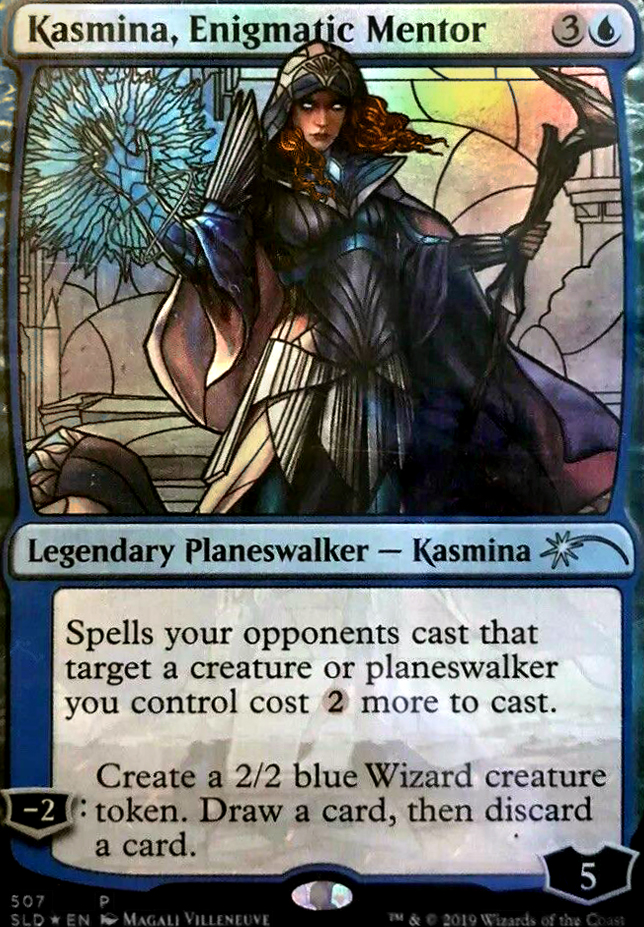 Using the card search page and setting "Converted cost" filter to "0-0" does not restrict CMC to just 0.

For example, I tried to do a search of
Colors: Colorless Blue
Converted Cost: 0 - 0

And received a list of all blue or colorless cards despite their CMC, like Academy Journeymage and Aboshan's Desire .

Wizards of the Coast v3.8

65 cards and only one copy of each ? Am I missing something ?

With only 13 instant/sorcery creatures like Guttersnipe, Aven Wind Mage or Enigma Drake are totally useless, you have to define a strategy, choose the best options and run 4 copies of the cards you really need. Adeliz, the Cinder Wind has no purpose here unless you remove dragons, sphinx, etc, and replace them with more wizards. And again, you would need at least 20/22 instant/sorcery to benefit from it.

Why run Academy Journeymage ? It's expensive for a 3/2, very bad card in my opinion, you should add more Exclusion Mage, it's a 2/2 with the exact same effect.

Tormenting Voice is good for mono red, but the best draw cards have always been blue, where is the point not to use them ? Remove it and Divination, and try 4 Opt instead !

In its current state this deck has no consistance, no real pattern, for a solid wizards deck I recommand you keep 4/5 full sets of creatures, and add as many instant as you can.

If you have a moment have a look at my ultra-budget standard deck using some of the same cards : http://tappedout.net/mtg-decks/01-09-18-redblue-wizards/

Yeah, Cryptic Command is pricey, but nothing else comes close to it's versatility. I think one of the major issues you may run into is even a budget aggro deck may be able to out-tempo you. Most of your good options will make the deck are fairly expensive. Things like Snapcaster Mage are very expensive, but allow you to flashback cryptics or Vapor Snag(which you should probably be running). If you are going to run 3 cmc counter spells run Dissolve, not cancel.

Other suggestions: Remand which is an awesome tempo card and Logic Knot.

I know some of the suggestions are expensive, but the deck as it stands is neat, but won't win often. You also need better threats. Delver of Secrets  Flip could work for you. It's front is a wizard, and it's back side is a 3/2 flyer.

Academy Journeymage is way too slow for modern. You have until about turn 4 to do something that has a significant impact on the board state. If you don't, you will probably lose.

Cipher cards are generally awful. Replace with something like Essence Flux or some other flicker effect to get additional value from your bouncing creatures.

Wizardy draw with some infinite combos

Let's get you some wincons, and fix that landbase.

First: Landbase. Basic stuff, manarocks, and better land cards, and a touch of fetchlands to get us rocking and rolling. Then, guess what, you're playing green. Congrats, you get the luxury of a vast array of tasty morsels called ramp spells, so we'll take advantage of that.

-Blink of an Eye + Gilded Lotus

Next, let's look at capitalizing on your commander's strengths: Card draw. We'll add in card draw, and some hand size manipulation to help manage it, along with some ways to make use of all that mana you gain and cards you draw.

-Devastation Tide +Goblin Cannon (with your upcoming infinite mana/card draw combos, draw into this, then ping everyone for infinite damage and win, the ability stacks as many times as you pay the mana for it, before sacrificing itself).

-Saheeli's Artistry +Empyrial Plate (slap that on your commander, give it flying with caller of gales, free commander damage kill)

-Ghostly Flicker +Aphetto Alchemist (equip bracers to alphetto, tap to untap it and target manarock or kydele for aother infinite mana combo, once you have infinite combos going, you can take multiple turns, draw out your whole deck with psychosis or lab maniac or tishana, or empyrial plate, etc)

Other infinite combos you can look for are Sword of the Paruns or Umbral Mantle equipped to kydele if she's drawn enough cards. The possibilities are vast, just a matter of finding yourself a bit of room for those cards, which shouldn't be too hard. However I'm also aware of budgets, I know I've suggested a LOT of changes, many that you might need to purchase, and while the individual cards aren't too pricey, collectively it's a lot once you look at all the changes. But if you're personally looking to take your deck to the next level, I'll add some more blingy suggestions at the end of this comment.

Last couple of swaps to make:

other cards to consider would be a touch more cantrips and counterspells? Depends on local meta, how often you need to stop people from preventing your comboing off: Pact of Negation Muddle the Mixtures Brainstorm Mystical Tutor

Superb, a two-mana Panharmonicon is just begging to be busted and I really dig what you're doing with this deck by going for Devotion! The only suggestion that comes to my mind right now is switching out Academy Journeymage for Ãther Adept - it's always cheaper than Journeymage and contributes more devotion (though its trigger isn't a 'may', so could end up bouncing one of your own guys if the opponent's board is empty?).

DragonGodKing90 -- The keyword in this build is BUDGET, as you can see, Snapcaster is an upgrade option in the maybeboard. Thing in the Ice  Flip suits more of a dedicated spellslinger strategy where it flipping benefits you in having few other creatures. In this, I'd end up with a hand full of wizards that maybe have a reduction in CMC, including Naban who I need out to benefit from the triggers.

ClockworkSwordfish -- I'd forgotten about that! I'll drop it in the maybe for now, might replace a bouncewizard like Academy Journeymage with it.