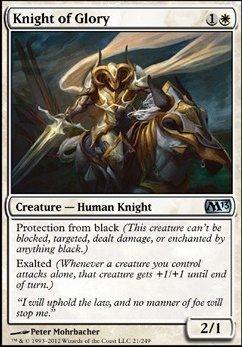 Boo the Terrible
by zswarat

There can be only one...
by TheFreedom359 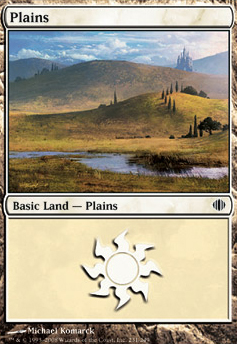 I like it a lot! I'd consider looking into a Stoneforge Mystic package and Mirran Crusader over Knight of Glory in the sideboard since your deck wants to attack with one giant creature, but at that point I think I'm just suggesting ways to turn this into a GW goodstuff deck, which I don't think is what you want to do. Maybe cut a couple of 4 drops for some more 2 drops or Birds of Paradise to help with your curve (You run the risk of not doing anything for the first 2 turns of the game, which is a little too slow for modern), but other than that it looks great.

Not much into Vintage but on the lines of 'Prot:Black' to protect against Pestilence cards like Auriok Champion, Knight of Glory, and Mirran Crusader could prove effective. You could make more use of the protection by splashing blue for cards like Alter Reality/Mind Bend