The Science of Suffering - Nin, EDH 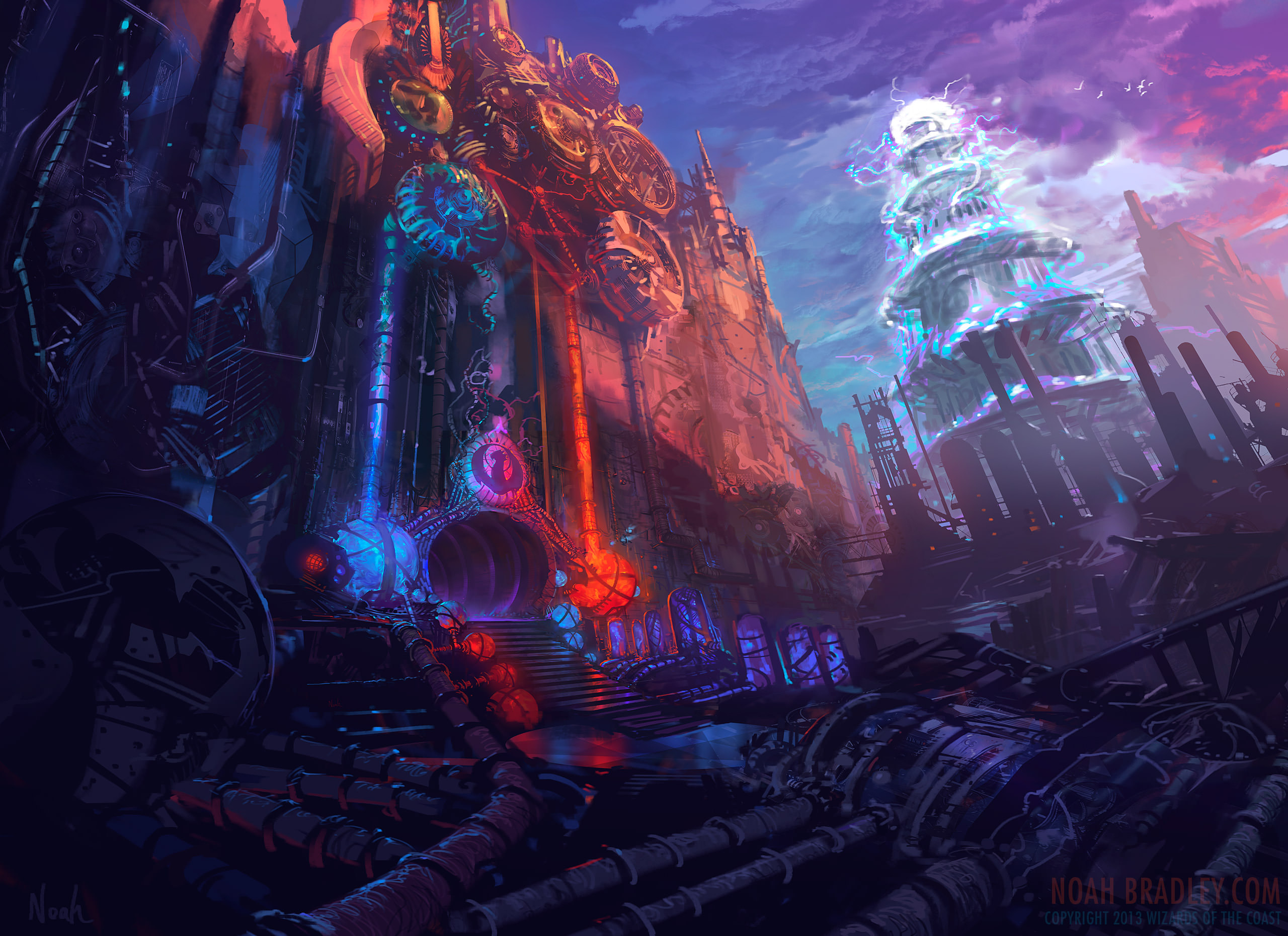 Now, this may hurt me more than it hurts you... 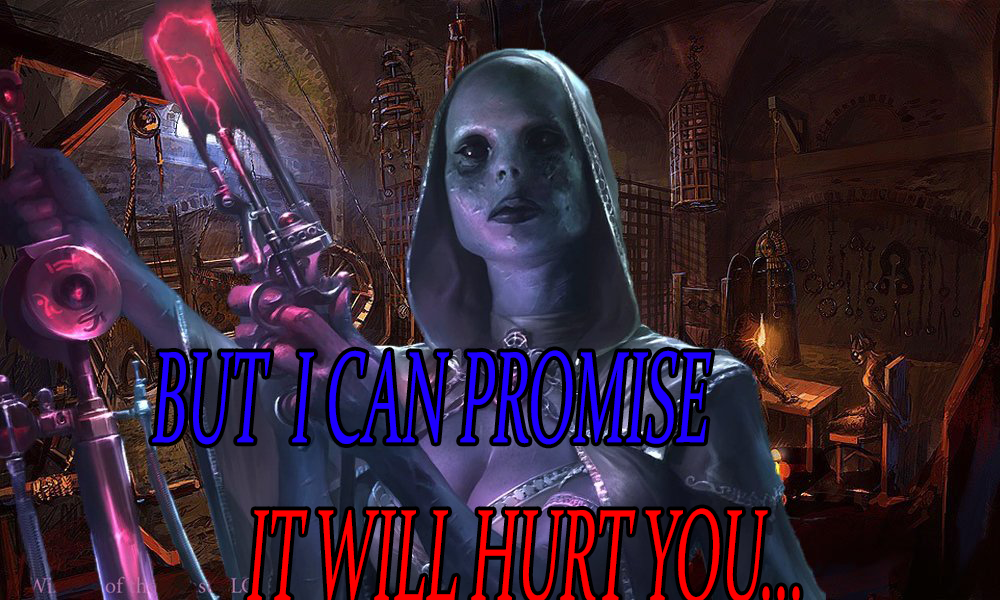 Science tells us that the benefits of pain, despite its unpleasantness, are many sided. It adds perceived value to activities like punishment and endurance sports, it alerts the brain to possible or confirmed physical damage, it inhibits the undertaking of unpleasant experiences and it can strengthen our defense systems. In this deck, we'll observe these aspects from a Commander point of view and discover just how much pain we can endure.

To Play or Not to Play

Reasons Not to Play

1) How do we obtain funding?

Our mana sources are many; from artifacts to rituals, we can find just what we need if we're willing to invest.

Mana Crypt is a no-cost way to keep your engine going. Mana Vault, Thran Dynamo and Grim Monolith each provide , with the Monolith having the added benefit of gaining with Power Artifact. One might consider Basalt Monolith, but I tend to find myself shying away from the card, as it doesn't appear to add the right amount of speed. Sol Ring is here, because of course it is.

Chrome Mox can get Nin on the board during your first turn, provided you've something you're willing to sacrifice for it. Additionally, Izzet Signet and Coalition Relic provide needed color fixing, while Doubling Cube acts as a major performer, insuring you always draw heavily and are ready to cast.

Extraplanar Lens in combination with your Islands will always benefit you, while more than likely leaving your opponents out to dry.

Energy Tap and High Tide both provide mana based on the availability of local resources; I find these to be uniquely helpful. Braid of Fire can provide you a major boost during your upkeep; either paying for Mana Vault and Grim Monolith or using it to draw a ton of cards with Nin before your actual draw phase. Also, should you choose to run Mystic Remora and cast Braid before hand, then enjoy never paying for the fish.

Inner Fire and Mana Geyser provide us just the right amount of ritual based power, which we can use to draw or combo out.

Our lands our fairly straightforward; plenty of fetching, some hate in the form of Strip Mine, infinite hand size from Reliquary Tower, Islands for Extraplanar Lens and early at the cost of pain with Ancient Tomb.

2) What kind of laboratory equipment do we use?

These will help us achieve our results. Given that our deck is more than 70% blue, Sapphire Medallion was a no-brainer and staples like Lightning Greaves have their obvious value.

I'm a bit embarrassed to admit that in my first draft of this deck, I'd forgotten Scroll Rack. This card is the epitome of value in the deck and with as many cards as we'll have in hand, we can either swap a ton of them for an answer to a threat or perhaps an additional combo piece to put the finishing touches on our grand experiment.

Conjurer's Closet will not only allow you to blink enemy creatures to make them yours permanently, but also blink your own to refresh ETB triggers.

Mind Over Matter is essentially a guaranteed win condition; dump your hand minus a few combo pieces and proceed to untap mana rocks, lands and Nin to consistently draw more than you discard, until you find a combo you can use to win. You can also tap your opponents lands before hand and shift phases to stop their responses.

3) Who can best assist us in our research?

Well, first, we need to figure out who most benefits from a little self-mutilation. Creatures that have some effect upon receiving damage will suffice; this is where Cutters come in. Originally, I'd played around with cards like Deep-Slumber Titan- for a 7/7 isn't bad at all, especially when you can spring it on an unsuspecting opponent and draw cards off of it. I'd suggest trying him out in your build for a little added fun: poking the way-too-big-to-be-a-bear, as it were.

Creatures that have effects on death, like sadbot, are a totally different ballgame and will usually benefit us by offering an additional draw, on top of the many cards we're already drawing. Both Palace Familiar and Rushing-Tide Zubera draw us extra cards upon dying. Mogg Maniac is also valuable, due to his versatility in damage dealing. Early game, it can deal just the smallest bit to an opponent when it dies, while later, it can finish off a single target in preparation for the final attack. Keiga, the Tide Star provides us the ability draw cards and gain control of a creature on death, which makes him a very valuable test subject.

Now, let's find some other effects that can be granted on death. Chasm Skulker is going to get absolutely huge in this deck and if/when it dies, you'll be left with many squids in its wake. A similar effect is gained via Wurmcoil Engine, however, the true star of the suicide squad is Reef Worm. This thing consistently amazes and astounds me. With Nin, you are guaranteed to have a Kraken before the game's done.

Our control group- scientifically speaking, of course, are unchanging variables that can't die from our vigorous testing, offering us a lot of extra value based on their wondrous resiliency. Stuffy Doll will ensure that someone doesn't have a good time anytime you activate Nin, while Kefnet the Mindful and Darksteel Myr provide a perpetual vanguard. Kefnet's almost always be able to attack and block.

Another goal is to assemble a small group who benefits from what we learn. Sphinx's Tutelage is a great way to win in this deck, based on how much you're drawing- barring old Eldrazi titans- you can, and should, deck someone out. The Locust God provides us with an aerial assault squadron, while himself being a renewable card draw resource, provided he dies at an opportune time and re-casting him isn't a problem. Psychosis Crawler not only gains its force from our sizable hand, but harms every enemy when we draw cards.

I've invited Ral Zarek to join us as his key mind proves invaluable in our strategy. He is our only Planeswalker in the deck, due to his +1 and -7 abilities.

Gaining control of your opponents' creatures is an effective way to keeping yourself going. Comboing cards like Conjurer's Closet + Vedalken Shackles can get you the majority of an enemy board over time.

Sower of Temptation gives us "while on the battlefield" control of an enemy's creature, while Roil Elemental does the same on landfall.

Gilded Drake offers a permanent trade, while being small enough that Vedalken Shackles could just end up getting the flier back anyways.

5) How do we deal with the Ethics Committee?

Needless to say, some may be less than enthused about our research and attempt to stop us. Well, with Counterspell and Counterflux at the ready, we'll silence them rather quickly. Mana Drain will allow us to continue drawing after the fact during our next main phase, thus becoming a rather one-sided Arcane Denial. Our Commander all-star, Cryptic Command allows us to counter, un-summon and draw.

Pongify and Chaos Warp are solid single target removal, while Blasphemous Act should destroy all creatures along the way. Cyclonic Rift is yet another Commander all-star and you'll find plenty of situations to use it. Similarly, Vandalblast will provide one-sided artifact hate. Nevinyrral's Disk is our most dangerous tool; be sure to use it wisely.

6) What painful conclusions can be drawn?

Here, we find our combos, while our mana making combos are rather straightforward with Grim Monolith + Power Artifact and Deadeye Navigator + Palinchron /Great Whale, our victory taking ones are a bit more varied.

7) Where is our expertise most lacking?

Well, a lot of our deck requires powerful artifact mana, so if someone hates artifacts, that's basically a death sentence. We run very few counterspells in comparison to other decks, given that the amount we draw over the course of the game essentially guarantees that we'll have one in hand, but they're not the most reliable outlet.

We don't have much in the way of maintaining an infinite hand size. I'd considered Thought Vessel and Venser's Journal- I might put the latter in the deck anyways- but there's still little room for it. Reliquary Tower was of course automatically included and if you're feeling frisky, why not run Tolaria West to tutor for the land if you're desperate? Should help.

Considerable Improvements May Include:

Finally, the deck can be slow with an unfortunate hand. There's no way to really avoid this, so adaptability of the user becomes imperative. However, in science, as in life, we must have the wisdom and fortitude to change what we can while learning to understand what we cannot.

In the original draft of the deck, I hadn't considered the interesting appeal of Humble Defector. What I learned was that on my turn, in response to activating its ability, I can target it with Nin, kill it first and draw 3+ cards during one of my phases, leaving no one with control over the humble defector. Amusing.

Long-Term Plans is incredibly valuable, as this is a combo deck without black, we need to sometimes tutor things without people knowing and we have insane draw capability.

Great Whale + Kiki-Jiki, Mirror Breaker + Paradox Engine means always having mana, presuming you can keep casting spells, which you can.

I've also considered and ultimately decided on adding Rekindling Phoenix to the mix for the sake of some repetitive draw on a single body. I removed Conjurer's Closet in an effort to veer a little bit away from permanent creature theft. I'd rather just kill my opponent's thing once I get it.

Added a few small draw cantrips. Found a fun little card called Uba Mask that gets around that pesky hand size limit; one could also just run a Thought Vessel or Venser's Journal. Wheel of Fortune has also been added, just in case. Jace's Archivist has joined as a good way to continuously wheel with untap effects and eventually play Lab Maniac. Speaking of untapping, Fatestitcher has also been added. We've bumped up the land count a small bit and lowered the amount of Theft style cards. We just want to get to our win conditions faster.

To the Izzet League, science is all about taking risks. The Firemind tells us that one cannot find new solutions if they are not willing to step outside of their comfort zone and make a bit of a mess along the way. The thing that unites us, that brings and together is our desperation: we're desperate to know, desperate to learn, and with that desperation, we're capable of finding interesting and unique solutions to problems most wouldn't even have known were there. Then, we move on to the next one. A solution is but a stepping stone to the next grand creation and every idea must be better than the last.

"Don't just have an idea-have all of them."

[Music]: For the Damaged - Coda

If you liked the deck, please consider an upvote.