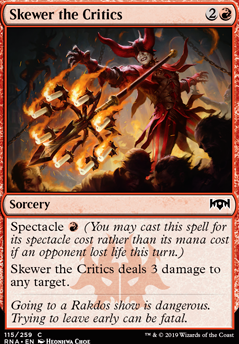 This deck is a $25 red deck wins/burn deck. The goal for this deck is for it to be competitive enough to get first place at fnm. It wins by casting burn spells such as Lightning Bolt targeting your opponent until you deal lethal damage.

Kiln Fiend: This card usually only sees play in mono-red prowess but a card that gets +3/+0 until end of turn for every instant and sorcery you cast is to hard to pass up. It can be a significant threat when not dealt with and sometimes win games.

Hellspark Elemental: At first glance it's not bad. Pay and get a 3/1 haste until end of turn that later comes back from your graveyard. If this was a sorcery that said pay and deal 3 damage and flashback for that would be busted. But it's a creature. It doesn't help give Ghitu Lavarunner haste and it doesn't do a significant amount of damage. It's currently good enough to be a 2 of but if you are going to replace any cards this is probably the best one.

Lightning Bolt: This card is a staple in most formats that it's legal in and it being in burn is pretty self explanatory. Decks that are too cheap to have Lightning Bolt probably aren't worth playing.

Shard Volley: A worse version of Lightning Bolt but a staple in this deck. I chose this over Shock and other one mana 2 damage cards because in this deck usually after you've emptied your hand you won't need more then one land to play stuff. I think it's worth sacrificing a land for an extra point of damage but this can always be replaced with Shock.

Searing Blaze: Removal for creatures and a way to deal damage for ? This card is slightly worse in this deck because you won't use it at instant speed because there are no fetch lands. You will usually want to save it for a turn that you play a land but 1 damage to a creature and 1 to your opponent isn't the worst. Right?

Skullcrack: There are like a ton of modern decks playing cards that gain life. Soul sisters is a real deck right? Skullcrack prevents damage from being prevented from cards that prevent damage. And stops players from gaining life. It's currently priced around a dollar so it's not worth playing more than two copies. But it's always good to pack main deck hate against turbo frog.

Thunderous Wrath: The best burn spell in non blue decks! One mana 5 damage! It's not played in most burn decks because if you get it opening hand it's awful but otherwise it's great. One annoying thing about it is you have to draw your card carefully each turn to make sure you don't accidentally draw Thunderous Wrath without first revealing it to your opponent so you can cast it for it's miracle cost.

Rift Bolt: A Lightning Bolt that takes one turn longer to resolve. I think Rift Bolt is a great card though people may have varying opinions. At worst it's a 3 drop that deals three damage at sorcery speed. At best it's a turn one Lightning Bolt that doesn't resolve until your opponent has taken their turn. Another reason it's worth playing is the time spiral printing has awesome art!

Skewer the Critics: Perhaps without this card budget burn with a real turn 4 win wouldn't be a thing. It cost a quarter and is an amazing card. For it to be a Lightning Bolt your opponent has to have lost life that turn. One of its cons is that it's a sorcery rather than an instant. That makes it significantly worse because you can't just Lightning Bolt your opponent if they crack a fetch land. In some scenarios Rift Bolt is better but it's definitely worth 25 cents.

First things to upgrade: After that upgrade the mana base by getting fetches and splash white for Boros Charm and Lightning Helix.

Thanks for checking out my deck! Suggestions are appreciated.