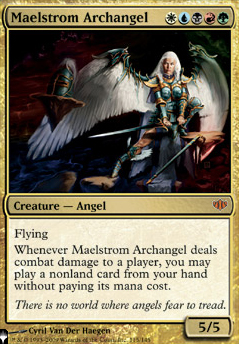 Golos and his Holy Pilgrimage

Maelstrom Archangel as an in-house commander. Jodah to be used in any other circumstance.

Group house rules: Only buy cards at Â£10 or less. 1 card may be up to Â£15. (using MCM as a purchasing source) Any cards obtained through booster gambles or boxes maybe used. (Hence the number of 'From the Vault: Angels')

All 10 shock lands - Being 5 colour I felt this was a must. Fetch lands are not in budget so I cannot get those.

Buddy Lands with W and/or G mana - This triggers on most of the shocklands and basics and supports the mana costs and ramp of the deck.

Basics - 6 in W for the curve and then 2 in G and R to reflect ramp and dual casting costs This should be ok for mana coverage but I am tempted to have each split land have at least W attached.

Skyshroud Claim can get two Shock lands with Forests attached which can help curve out other colours I might need.

Gift of Estates can get three Plains, 4 of which are shocks, with another 6 in the basic pile. Farseek can get any shock land that i need.

Krosan Verge can get two shocks that i might need for any colour, or basics should that be all i need.

Herald of War makes your angels cheaper if she attacks. There are few flyers in my meta so this shouldn't be hard.

Prismatic Omen, Chromatic Lantern and Fist of Suns cover this.

Given that our mana curve sits just below 5, cheating cards seems like a must have.

Maelstrom Archangel is the CMDR of this deck but for what ever reason, Wizards decided for her to not be legendary so if someone has an issue, Jodah fits the bill.

Maelstrom Nexus I am really fond of. I don't imagine it will last long but as this is 5c, I might as well treat myself to fun cards.

Cryptic Gateway sounds great. Tapping Angels isn't ideal but if i can tap tokens then it's a done deal. Just two angels and it's payed for itself in value.

Quicksilver Amulet as above.

I love Serra so when she was given this card... it had to go in. It just makes Tribal sense. Serra the Benevolent. Plus her ult is only two turns away and it's pretty funny.

This was a bit tricky. Running out of space and unsure if I wanted board wipes considering my own creatures... none the less - Wrath of God and Supreme Verdict. They are pretty well on theme for angels in my mind.

Angel of the Dire Hour protects me from huge attacks that might end the game. Exile is very strong.

Sunblast Angel comes in if an opponent has hosed another opponent with mass creatures. Play it safe and then just wipe their board after they focus someone else.

Utter End, Anguished Unmaking and Mortify for spot removal. Cheap exile costs on the first two on any permanent.

Cyclonic Rift and Swan Song for those moments where an opponent plays a winning piece or is threatening a damage victory.

Shattering Spree to remove pesky artifacts and opponents ramp. We are going to be fairly slow to start so your opponents should be slow too.

What would an angel deck be without the glorious winged ladies coming back to bring you holy glory once more? (A rubbish one)

Adarkar Valkyrie brings creatures back just by tapping. This combos well with other creatures like Shalai, Voice of Plenty who may be targeting to remove the wide hexproof. If Shalai gets hit by spot removal... just bring her back to cause more headaches.

Bruna, the Fading Light can bring back any creature we have! Probably Gisela to attempt the meld as it's so damn strong!

Deathpact Angel brings itself back! Unless exiled, your opponents will have to waste removal on a 1/1 just to make sure she's gone for good.

Karmic Guide, Reya Dawnbringer and Twilight Shepherd to bring back key pieces or survive a board wipe.

Defy Death just makes sense. Not only does it get something back but it comes back stronger! Always a winner.

Faith's Reward... as above but for all permanents. Counters Nev's Disk and the like. Plus it's very in theme!

Every edh deck should have some 'fun jank', and by fun... i mean fun for us and that's about it. We are delivering God's justice here! Heretics be damned!

Seraph of the Sword and Iridescent Angel with Pariah's Shield means that either combat damage or ANY damage i personally take is redirected and IGNORED! Now this is what we live for! Supreme protection! With hexproof and indestructible from other sources, only exile board wipes can change this (and cyclonic rift but that's what Swan Song is for))

Shattered Angel + Archangel of Thune is a neat combo to make your board more meaty. Your ramping opponents may thing twice about it.

What would angels and a predominately white deck be without protection? (unfortunate the circles of protection can't fit but that's ok)

Aegis Angel makes one thing indestructible. maybe Shalai, Voice of Plenty or a control piece like Stoic Angel to keep that edge.

Angel of Grace to keep us in the game should someone spike off. I don't think 5 mana is too much to ask to stay in the game. Most games end when I 'could' have won next turn so we shall see if this helps.

Avacyn, Angel of Hope - the main lady of the heavens! Speaks for herself. Aim to pair her with hexproof if possible.

Empyrial Archangel sadly has shroud but that's still 8 toughness to overcome which could stop some burn.

Gisela, Blade of Goldnight is straight up hilarious. We take 1/2 damage, your opponents take x2 damage from all sources of damage include burn and combat.

Sigarda, Host of Herons stops us from sacrificing our angels and Shalai, Voice of Plenty gives everything (but herself) hexproof. Take that swords to plowshares!

That generally sums up the deck. Try to get a starting hand with some ramp, or atleast most colours to get the CMDR out. Then start playing the winged ladies and hit face! Aurelia, the Warleader helps with this... a lot.

There are a lot of cards that I have not included but they will be shown in the maybeboard to show that I haven't forgotten them. I just don't know where they would go yet.