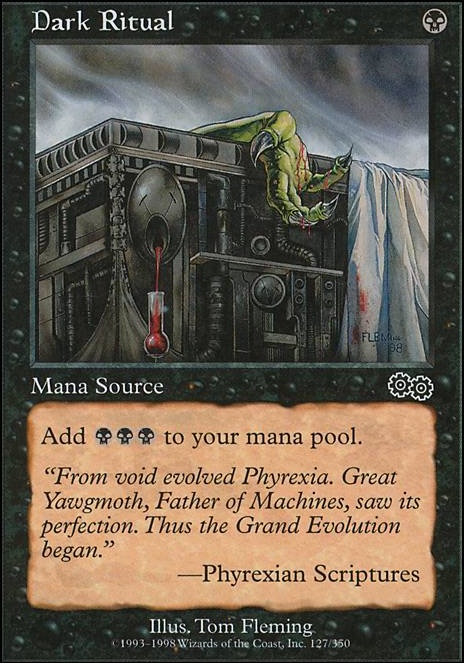 Unhallowed Be Thy Name takes command of the undying hordes, there truly is no rest for the wicked. He takes necromancy to the next level by abused the undying and persist mechanics like few others can. As such, his level of control becomes quite cruel, and with nothing but black mana to be concerned about, he recruits only the most degenerate and exploitable of minions for his dark plans.

Even as he draws your opponents hatred, his evil plans include so many winning lines that it can be more than your opponents can overcome, even if he never sticks on the board. Thanks to the numerous built in combo pieces that can quickly end the game, interaction with your opponents board is pretty much limited to Toxic Deluge, thus staying focused to the fastest available win option is always the best bet.

Several killer combos can be accomplished quickly, including with Phyrexian Altar

, as long as you have at least one other zombie in play, except with the Belcher, who self fulfills this role. This combo requires the infinite sac-cast of Gravecrawler, which is open to responses, but is often effective in ending the game none-the-less.

Another combo would simply be Triskelion or Walking Ballista with Mikaeus, the Unhallowed already on board (Ballista would also require a sac outlet or Blasting Station

in play), resulting in an undying loop using their counters to kill your opponents (while using the last two counters each time to kill Triskelion

and the last counter to kill Walking Ballista in each of those combos). Finally, any of the persist-type creatures in the deck (Putrid Goblin

in play and Blasting Station

or another sacrifice outlet can create infinite undying loops, which without the Blasting Station

, infinite mana from the same persist/undying sacrifices (plus Su-Chi) to artifacts Ashnod's Altar

, as well as other potential shenanigans like swinging with an enormously pumped sacrifice outlet creature like Phyrexian Ghoul

, or exiling all of your opponents libraries with Bitter Ordeal.

The deck still has plenty of synergy even without these killer combos, plus a large number of tutors to find the most efficient combo kill based on cards in hand, so even if a certain combo get hosed, there's always another to find based on the variety of creatures, spells, enchantments and artifacts in the deck, which can easily get you to an alternate win condition in just an extra turn or two.

The depth and versatility of black is obviously strong, and the mono-black mana base leaves it very consistent and efficient. The included artifact ramp and mana producers (Mana Crypt

, and Culling the Weak), plus mana-doublers (Bubbling Muck

) greatly improve the speed and effectiveness of the deck, which help to power a win condition a turn or two earlier than expected.

The inclusions of Buried Alive

can help fill the graveyard with the right reanimation options for any situation, with Animate Dead

to accelerate reanimating a key combo piece more quickly or returning a previously destroyed creature to play once Mikaeus, the Unhallowed

to find your key two and three CMC options), your ability to find exactly what you need to answer a threat or combo off for the win should be quite consistent. With the additional search/draw options available (Necropotence

, Sensei's Divining Top), they can help dig and sort your way to victory more often than not.

Because black is so deep in terms of quality cards for reanimation build options, there are numerous additional cards that could easily make the cut in the deck as well. Give it a try and see what you think, and feel free to offer any feedback or suggestions on other strong fits for the deck. Thanks for looking.