Hi everyone, welcome to the primer of my Breya's deck!

At its core this is a critical mass artifact deck. It's composed mainly by artifacts, cards that generate artifacts (Thopters, Servos, Myrs, among others) and pay-off cards who care for large quantities of artifacts. Artifacts in play can of course be used as fodder to fuel and enhance Breya's abilities. 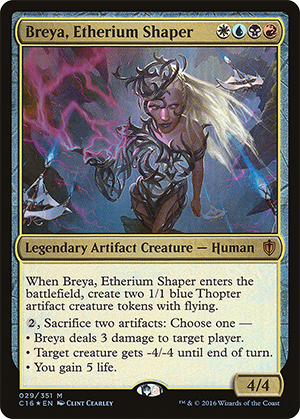 Decent stats for a 4cmc Commander. 6 hits to kill a player with commander damage.

Possible inclusions: Helm of the Host (copying Breya adds 3 artifacts to the board)

Inclusions: Master Transmuter (cheat artifacts from your hand into play)

For 4 mana we add 3 bodies to the battlefield which happen to be artifacts. This ability alone is exactly what we want to be doing which is to achieve a high artifact count.

Breya has a 4/4 body which is not very impressive by EDH's standards but it's more than enough to deter a lot of pesky attackers and can hit opponents that are not able to assemble proper defences (her -4/-4 ability can help here). The 2 Thopters are just 1/1's but they give us some defensive chump-blocking options, can often hit opponents that do not have flyers and last but not least be used (just like Breya) as sacrifice fodder.

Breya's activated abilities require 2 generic mana + 2 sacrificed artifacts. This activation even if costly it should not constitute a problem. Breya alone offers fodder for 1 and a half activations and the rest of the deck's composition are mostly artifacts anyways.

But what do we get for this?

With the first ability we can ping an opponent (and even kill him if his life total is lower than 4), or if there's just one opponent left and he is in "shooting-range" we can sacrifice most of our board to ping him until he's dead.

Dealing 3 damage to a planeswalker is also extremely useful and something that I often overlook, but shouldn't!

Target creature gets -4/-4 until end of turn

The second ability is the one we use the most. At the moment it kills roughly 70% of all commanders and a whopping 87% of all non-Legendary commander-legal creatures. That's a lot of possible targets and it comes really handy when we need to get rid of nasty commanders or creatures that are just bringing too much value to their owners.

The ability we use the least but when we use it we are definitely glad we have it!

Should I play this deck?

Below I listed some packages of the deck that revolve around the cards Tolaria West , Expedition Map , Trinket Mage , Artificer's Intuition and Treasure Mage . The redundancy and access to the multiple functions that they provide makes the deck operate smoothly.

Fixing: Both Tolaria West and Expedition Map allow you to get any land.

Thank you for reading! If you liked the deck/primer please consider giving it an Upvote

Have any idea(s) on how to improve it? Your comment is appreciated!