Dawn of the First Day 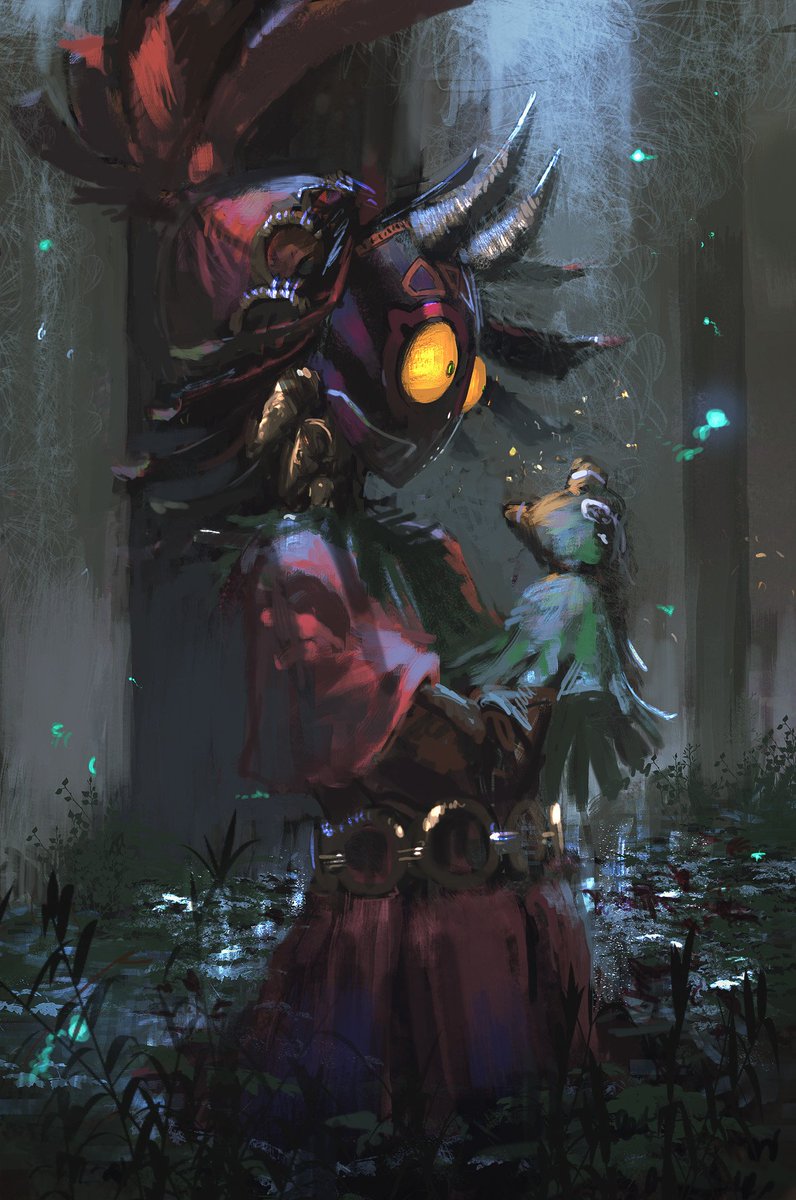 "I wish for you to go to the temple in this land and sever the root of the evil curse that torments us."

You might be wondering why the deck's ramp package is being listed first. In my other articles, I usually leave the less-interesting sections at the bottom. However this package also doubles as one of our win conditions. Land auras plus Estrid, the Masked plus The Chain Veil (enchanted with a Mask) assemble an infinite mana combo, ending in Estrid's ultimate ability. In essence, each bit of ramp is the tolling of the Clock, bringing us ever closer to Termina's pivotal moment.

Our selection of Wild Growths is certainly an inhibiting factor in the prevalence of Estrid, however, so is our selection of lands. We need our enchanted lands to hit a threshold of five mana in order for the Chain Veil combo to generate infinite mana. We cannot complete the game by freeing only one area of its curse, so auras generally need to be spread out instead of stacked. Forest

doesn't. It also reduces the odds of being blown out by Wasteland.

"From the first time you play this song, we shall become eternal friends, transcending time and place!"

"I have placed those throughout the land to aid the one with the power to change the destiny of this land... Wherever he may appear."

Unfortunately, there are very few ways to protect a planeswalker in this format. Tamiyo may not prevent Estrid from being killed, but she will provide card draw when our opponents enter the red zone. She also serves as an easy method of drawing our deck with the Chain Veil combo by repeatedly using her +7. In the early turns, Mystic Remora draws cards off of the opposition's ramp, but generally it and Rhystic Study punish those who refuse to play fair.

Journeys begin with a single step, and seeking wisdom ensures that the step is taken in the right direction.

The ancient ones, fearing such catastrophe, sealed the mask in shadow forever, preventing its misuse. But now, that tribe from the legend has vanished. They were forever doomed to live in the twilight, flitting in the half-light of dusk, mere shadows of Hyrule... so no one really knows the true nature of the mask's power... - Majora's Mask and Twilight Princess

The opportunity cost for running such harsh artifact hate is quite low. Sol Ring is a pointless inclusion when Utopia Sprawl taps for one less mana but acts as a combo piece. As such, there is only one artifact in the deck. The deck is well-equipped to answer its own Stony Silence should it dampen the Chain Veil.

Very few creature decks can fight through so many fallen civilizations and tedious fetchquests. The progression of our board state is marked by how much we inhibit the opposition's.

"It is something that grows over time... a true friendship. A feeling in the heart that becomes even stronger over time... The passion of friendship will soon blossom into a righteous power and through it, you will know which way to go..." - Sheik, Ocarina of Time

Loss is present throughout this world: the loss of a father, of a legacy, of a fiancÃ©, of an empire, of one's own children. Deep within every person is an anguish that is too painful to look at but too beautiful to turn away from. It is unique and enchanting and cruel. It takes hold and all one can do is fall ever deeper into despair.

"Let us exchange the promised masks. We have exchanged our oaths and have become a couple. You are our witnesses. Please accept this mask. Please take refuge. We are fine here. We shall greet the morning... together."

That despair eventually gives way to joy, and that joy to appreciation of despair. For the pain of loss heightens the joy of gain.

Decree of Silence can create a window to go infinite or lock the opponent out of the game completely with Solemnity.

This soldier who has no heart is your twin image. A shell of yourself that you will shed when your song commands it.

A second Sphere of Safety, or perhaps the Market Festival that hits the threshold, these fill any role we need them to fill.

"What a soothing melody... My sorrows are melting away into the song."

Lulling a commander into apathy is a heavy blow. Tana, the Bloodsower? Meren of Clan Nel Toth? No, just an insect and a frog.

On the surface, this is just simple interaction, but in reality they are powerful deterrents. Players refrain from casting powerful artifacts or enchantments for fear of them getting shattered or unwoven.

"I am praying... I am praying that your journey be a safe one. If something should happen to you, remember this song... The Goddess of Time is protecting you. If you play the Song of Time, she will aid you..."

Disaster can be averted, but it can also be reverted.

It is said that an evil and wicked power is bestowed upon the one who wears that mask... Could this mask's dark powers be as bad as Majora?

These masks turn peaceful enchantresses into demigods. Barring the combo, this is the simplest way of winning the game. These are also effective as we combo off, as we can attack unabated having bounced the table with Words of Wind. In the meantime, Ancestral Mask and Ethereal Armor work to make Arbor Elf or Magus of the Candelabra eligible for Estrid's +2.

"If you just leave things as they are, something terrible will happen to this world!"

The soldiers are evacuating Clock Town, the boy climbs the tower, and the Fierce Deity Mask within the Moon yearns for a host. There are so many ways for this story to end. cackles

"Just look above you... If it's something that can be stopped, then just try to stop it!"

Alternatively, you can just cast enchantments the normal way and draw your deck. This method, however, more flashy and has the added benefit of increasing the likelihood of your opponents sitting through it. You also need to bounce your opponents' boards with WoW anyway, so why not kill two birds with one stone?

"To return true light to this land, you must seal the doors of Stone Tower where the winds of darkness blow through."

From terrier racing to soothing the troubled soul of a gigantic stalfos, the boy in green has eased the anguish of Termina. Moonfall is not what this land will remember, but rather the festivity of the Carnival of Time and averted disaster. We have amassed a board presence while slowing down the opposition. Now is the time to beat down with Angels, Pegasus, lands, and Tuvasa.

_"A puppet that can no longer be used is mere garbage. This puppet's role has just ended..."

I...I shall consume. Consume...Consume everything._

Have you ever wondered if you could beat someone down with commander damage...with a planeswalker? Theros Beyond Death answered that question for me. Now, this isn't a viable way to win the game unless we have gone infinite and bounced the table with Words of Wind, but that doesn't mean that it isn't one of the flashiest things you will ever do in the format!

Now having a Serra's Sanctum, personally, I decided to make a few changes to accommodate that and soften this deck's Achilles' Heel: Wasteland/Strip Mine.

Consecrate Land girds our Achilles' Heel and puts the deck ever closer to hitting the threshold needed for the Chain Veil combo.

With the addition of Setessan Champion, I don't feel too guilty about cutting Abundance for Crop Rotation. Crop Rotation is here as a second copy of Serra's Sanctum, or any other useful land. Words of Wind also prevents decking, so Abundance isn't really needed.

City of Solitude prevents opponents from interacting with other opponents' combos. Sure, it protects our own, but we aren't ever going to have the best combo at the table. The combo is an option and we can win without it.

Eldrazi Conscription is a win-condition once the combo has been performed, a way to stabilize the board, and a way to beat down fairly, however it doesn't do any of those things particularly well. The two factors that influenced this change have been the impact of Curse of Exhaustion and Frogify effects. Overwhelming Splendor is simply better than Eldrazi Conscription in this deck. "Oh, are you awake? I guess that story was a little boring for Tortus, wasn't it? Don't give up. Try again sometime."

New cards, new art, a revamped primer, and an enchantress player who really wants quarantine to END! As always, I will end by encouraging artists to put more of Majora's Mask to canvas/layer/paper. There is so much more of this game to capture.