The planeswalker spends the next few years hopping between Naya, and Ravnica. The Gruul do not welcome him back into their ranks -- infused now with white, life-giving mana from Naya, he finds he no longer has a place in their clans. They can smell the stench of white mana on him, a traitor to the rough wilds the Gruul live amongst. Shunned by his adopted Guild, the planeswalker makes a home for himself in the towers of the city, and begins working as a Bounty Agent , using his skills from Naya to hunt criminals in Ravnica.

However, he becomes more and more frustrated. No longer wanted by the Gruul, on Naya, he is looked upon with distrust and uncertainty - the product of his anger and short temper. The beasts he attempts to summon become more unruly, harder to control. and angrier. Gruul Ragebeast s, and Skaarg Goliaths who shatter buildings, structures, and jungles alike, with no regard for life; once such a key thing he had embraced.

_Growing tired of wandering between the two worlds, he cast himself into the void and made himself lost. Through the grey nothingness, he heard the whispers of something angry and sinister... it called him to war. Stepping onto this new, unfamiliar plane, he immediately felt the threads of fiery anger pull on him, even as he manifested within a dark glade of trees. He took his sword and illuminated his war forward with a simple spell, and walked forward into this bloodied, ravaged world. He tried to tap into the mana bonds of the plane, the same way he had done on Naya, but instead, he only felt the presence of the warmonger. He could see it in his mind's eye, the red-hot web of war that spread all across the world, distorting and inflaming all those unfortunate to touch it. Who could be feeding of this energy? What sort of creature, or wizard was it? At the back of his mind, he could hear the skittering, chattering sound of the spider creeping ever closer... ever closer...

_Whoever or whatever was the source of the energy on this weird world, he found himself both drawn to it, and frightened by it. The power it gave him was frightening, and he exiled himself to the wilderness of the world to try and discover more about it. In the depths of deep caves, and high atop the jagged peaks, he searched within his own soul, and the soul of the Plane for a connection. Was there only rage, and anger, and war? How did this affect the Plane? Predators thrived, and civilisations worshipped great, threatening creatures as terrible Gods, who fed on their subjects relentlessly. Still, he studies the mana bonds, and traces the great web of war to a single conduit in an expansive forest.

But in that jungle, he risks losing himself, as the rage inside him almost causing him to explode. Gradually going insane, haunted by the furious thoughts in his own head, again he lashes out, cutting swathes of forest away with the fires from his sword. The bestiary of his summons becomes something full of horrors as terrible Dragons come to his aid, and smash through the wood and swamp. But in all this, he see her...

Devouring his dragons and beasts, their battle rages as she attempts to trap him in his web. He realises something; the spider thrives on battle, and with every attack and strike, she gets bigger, and stronger. With every angry thought, and every furious strike, he would only be fuelling her power. He senses the mana threads grow thicker, and stronger around him. Soon, war will consume him. The bloodlust that he fears will take over him. In a moment of clear lucidity, he puts down his sword, and rests, crossing his legs and closing his eyes.

But she stops short of eating him.

He opens his eyes. His eys her pitch black and clouded over. He could feel a difference in his power... like the Anima on Naya, only... the antithesis of that power. In his minds eye, he saw the mana threads of anger again, only now, they listened to him. He wrapped Thantis in the grasp of her web, and held in place with her own invisible power. Channelling the power further, he pushed her away, and in defiance, chose not to destroy her. He departed from the forest, leaving Thantis to her own devices. Maybe one day, he would return, but for now. He had learned all he needed.

He returned to the mountains, and his exile, to seek out more of the strange, fury-filled beasts that taunted this Plane, never having learnt its name. No longer would his mana define him.

Get the Most Out of Your Myr in Three Easy Steps

So, this is actually a Lands deck. Strange, right? It actually began life as a Lord Windgrace deck, but there's a few reasons I began running Thantis. As a lands commander, Thantis, the Warweaver doesn't power the main strategy her self, but with the right support package, she basically works as a way to keep everyone's life totals nice and low, and acting as a nuclear deterrent against others attacking, especially when she can potentially one-shot someone if she gets big enough.

the main combo here is to get Thantis, the Warweaver out, and then use Sylvan Scrying or Elvish Reclaimer to find Glacial Chasm so that everyone has to attack each other, but no one can attack you. Lol.

So the general idea is to ramp out, generate card advantage by using our unused lands as resources for Tectonic Reformation and Lord Windgrace and our hand as a resource for Neheb, Dreadhorde Champion and Cavalier of Flame to pitch to our 'yard as many lands as we can, alongside Altar of Dementia to mill ourselves. Draw out our deck with Vilis, Broker of Blood , and Doom Whisperer , or at least heaps of cards with Yawgmoth, Thran Physician and Hapatra, Vizier of Poisons . We control combat with our commander, spot threats with out removal package, and close out games with a ton of Landfall triggers, or but using The Gitrog Monster + Borborygmos Enraged + Dakmor Salvage .

WHAT THE HECK IS XENOBLADE?

Xenoblade Chronicles is an open world action role-playing game developed by Monolith Soft and published by Nintendo for the Wii. Initially released in Japan in 2010, it was later released in the PAL region in 2011 and then in North America in 2012. A port for the New Nintendo 3DS was released worldwide in 2015. Xenoblade Chronicles is the first entry in the Xenoblade Chronicles series, a subseries which forms part of the Xeno metaseries. Although no direct narrative connections exist to previous Xeno games, it incorporates aesthetic and narrative elements from both fantasy and science fiction. The game features navigation through an open world split into zones, side-quests tied to party members' affinity, and a real-time action-based battle system which incorporates the main character's ability to see glimpses of the future.

Xenoblade Chronicles takes place on the frozen bodies of two warring titans, the Bionis and the Mechonis. The people of Bionis, including the human-like Homs, are in a perpetual war with the Mechon machine race of Mechonis. Key to the Homs' efforts in fighting against the Mechon army is the Monado, a sword that is said to have been wielded by the Bionis. During an attack on his colony, the main protagonist Shulk discovers his ability to wield the Monado and sets out on a quest for revenge with his best friend, Reyn, with others joining in as the game progresses. Source: Wikipedia Since its initial release, and inclusion as part of Operation Rainfall ( Which you can read aboutHERE ) Xenoblade Chronicles has garnered a cult following amongst wester audiences, famous for its gripping gameplay, amazing plotting and horrible voice acting, the whole things comes together as one of the most endearing RPG's ever made. So... what's it got to do with Thantis?

There is a famous underlying sub-quest ALL game that gradually tells an unfolding tale of a struggle between the ancient Giants, and the Spiders who wiped them out. There's like 9 WTF moments in the game where these MF's come of nowhere like this and start fights. Thus: 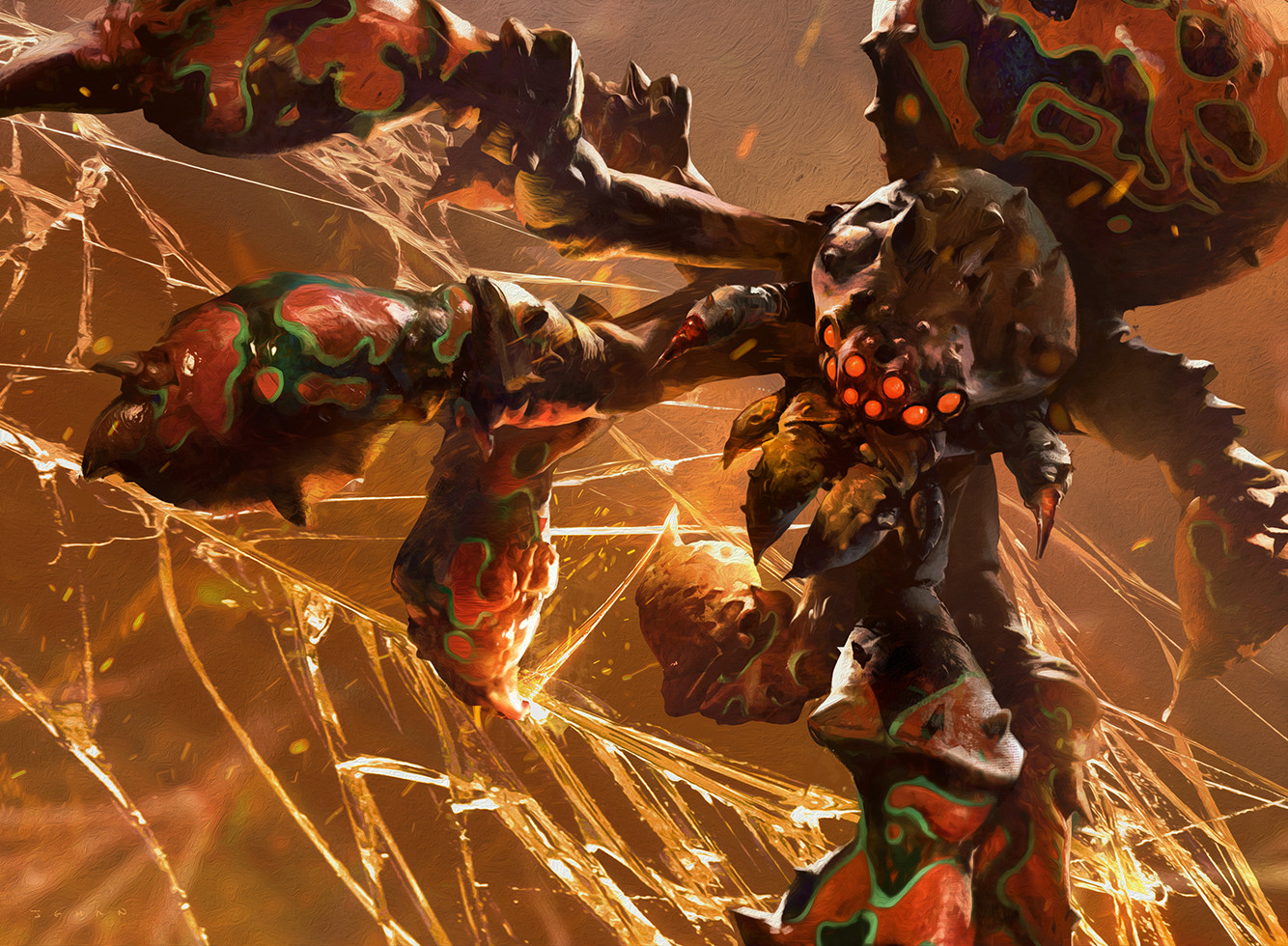 WHAT ABOUT THE DECK?

Well, I am yet to do a full write up. But thus far I have it categorised thusly:

This section is all about our allies, ramp, and keeping a healthy board state

This section is all about the graveyard, pitching our lands, and the monsters that roam the land

Cards that bolster or augment my current strategy, whether it be haste, card draw, ramp, etc.

These are the lands of the Bionis and Mechanise, full of vast caves, forests, and swamps.

WHAT DOES GRUUL MEAN TO ME?

When community + passion come together in nature, you usually end up with something like . I think what has been a bit annoying over the course of Magic, is that has come to represent more ANGER, than it has to represent PASSION. Anger is often detailed as an undesirable emotion, it clouds our judgement, stops us from making sensible decision. I choose to believe that if you're passionate about something, anger is a natural response, a logical response, it's about how you use** that anger and passion that becomes important.

often represents in MTG the poor and disenfranchised communities of the multiverse. As a result of their situation, the communities become angry with their displacement from ordinary society, and are often ostracised as heretics for their willingness to live 'free.' Often communities of the colour combination become antagonists in the MTG story: Xenagos, the Reveler , who becomes so enraged by the lies of Theros' Gods, that he becomes one, just to show the people of Theros how NOT SPECIAL THE GODS ARE. Domri, Chaos Bringer , so enraged by the treatment of his people that the only thing he could do in response was ally with a tyrant to destroy his own city. In the absence of White and Blue mana, Red/Green becomes violent without patience or love to temper it. But Arlinn Kord   is a walker who defends even those who would seek to destroy her, and so is Samut, Tyrant Smasher each have every right to want to destroy those that wronged them, but all take different approaches. Gruul is an inherently noble anger.

Many people frame anger as hideous emotion "don't get angry about it." Anger is fuel. It is emotion and passion. It is not a negative emotion, it's a fire that burns within you daily, proving that you care so deeply for others, for your family, your community, and you world, that you're willing to step up and raze the whole thing to the ground in order to save it. Fight for whats right, and let others debate the consequences.

That is what means to me.