With Splinter Twin on Pestermite, you can tap Pestermite to create a token, untap it with the triggered ability from the token, and repeat for infinite 2/1s with haste.

Hi can i get an izzet combo deck with fries?
by Cypher35 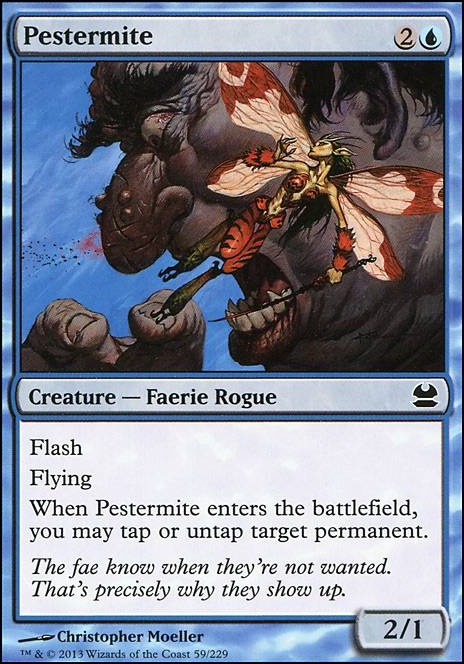 Cards that get stuff out of the graveyard saying Target is just a habit and expectation at this point but not an iron clad rule:

Standard examples that defy this:
Grapple with the Past
Seasons Past
Corpse Churn

Also we have had plenty of cards and abilities that put +1/+1 counters on things without targeting them:
Savage Summoning
Dromoka's Gift
Cached Defenses
Scale Blessing

As a side note the best counter they could ever print would say "Exile a spell on the stack" because the opponent would have to respond before you've made it clear which spell you want to exile. Once they let you choose which one you wanted to exile it would be to late for them to respond. This is generally why cards do say "target". Being able to get something back for or without telling an opponent what you're getting back until the spell resolves is much stronger and really punishes cards like Surgical Extraction if they are drawn later in a game.

An extreme example of this would be playing against a deck in EDH that has two combos: Pestermite + Splinter Twin and Grim Monolith + Power Artifact . Imagine they have a Grim Monolith on board and 6 cards in hand with a Splinter Twin and Power Artifact in the graveyard. The odds are that they don't have the Pestermite but what if they did? In this case if they target one I can fire back with Surgical Extraction and stop them. If they don't have to target I either let the spell respond or blindly guess which half they have in hand and may just loose.

Of course I should really be playing Bojuka Bog + Crop Rotation but what can I say I haven't pulled a C-Rotation yet. XD

Anyways with all of this said I really think Grapple with the Past deserves serious consideration in any commander deck.

I like the fact that this is modern legal and you could do this competitively in a professional tournament. This reminds of me of the Pestermite + Splinter Twin combo before it was banned. I could see something like this deck being played in Modern. There is probably something better than Mistcutter Hydra to put in as a win condition though so be on the lookout. I really like this concept.

BlueMageBrandon on Most powerful casual decks

I run a Pestermite + Splinter Twin combo casual deck. I classify it as casual b/c those are the only cards worth any value. The rest is just Cancels, Inspirations, and Drift of Phantasms.

Niv-Mizzet have no friends

First game - i tried to Pestermite + Splinter Twin on turn 4 - unfortunetly without counter spells and get my twin destroyed.Afther that I used Dream Halls to Enter the Infinite and then the long faces started.Wictory through the Laboratory Maniac was sweet. For Niv, not for his friends.

Madneko: Thanks for the +1. The combos that win the game for me are pretty vast.

To win the game outright:

Cloud of Faeries + Deadeye Navigator + Impact Tremors or Purphoros, God of the Forge

Storm is in there for the infinite mana combo with Capsize in hand, but I could back running the Mind's Desire in place of the Ignite Memories.