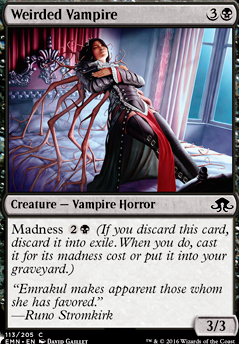 I would say that this deck is a fragile glass cannon. I recommend taking out all the fatty madness cards that don't do anything outside of being a madness card much like Weirded Vampire is. Replace them with cycle cards that are only for 1 mana (IE. Barren Moor and Desert Cerodon ) to give your curve more things to do outside of getting to three to cast the commander. Next, you need a better way than needing two pieces in the yard and two reanimation cards. Something like a Living Death or Electrodominance and Living End to get them both out. Small small thoughts but overall your deck helped my Anje deck too.

Weirded Vampire to be removed.

Twins of Maurer Estate to be removed.

You could add Asylum Visitor or Bloodhall Priest

Well, you only seem to have 8 total cards to take advantage of madness (4x Asylum Visitor and 4x Twins of Maurer Estate). You certainly have plenty of madness enablers, so now you need to strike a balance between enablers and beneficiaries. Voldaren Pariah  Flip is a common black card the can be quite good with madness, and Alms of the Vein, Biting Rain, From Under the Floorboards, Gisa's Bidding, and Weirded Vampire are all good beneficiaries.

I have a vampire deck built around madness-- maybe it can give you some ideas? B/R Vampires for fun and madness

I also have a zombie deck that might also provide ideas? U/B Zombies with no funny deck name

You do have 64 cards in the deck as I currently count them, so trying to reduce that to 60 is preferable, just to maximize your chances of drawing the cards you want.

You have a bit of a mixture of the two, and that's fine. Personally, I prefer to go tribal, but the zombie deck may very well benefit from a couple of vampires (including Voldaren Pariah  Flip, so don't be discouraged! I think you'll tinker and get to a deck that will make you quite happy!

First, I was wondering why Orbs of Warding was in your sideboard. It's super slow, and I don't see which matchups it would improve against, since your goal would be to outpace your opponents. Also, I feel like Rogue's Passage is too slow as well. I understand that it's a mana sink for when you gas out, but there could be better things to play, and I don't see it's ability being used often.

So, the new vampires. First, I have not tested Voldaren Pariah  Flip, as it seems too slow for my tastes. However, I could see its merit in the sideboard to win against more aggressive players or even to slow down against control to drop a bigger body. A 6/5 flyer that is basically a Butcher of Malakir is always interesting.

Brief note on Stromkirk Condemned: It's ability is killer, but its cost of BB makes it so hard to cast turn two, since we want to drop a Falkenrath Gorger on turn one. It's good, really good, but I don't know if it can work. However, it deserves a look.

Second, Furyblade Vampire has proven itself to be a champion. It enables madness on turn three for Incorrigible Youths (which can attack that combat) or even Bloodhall Priest (more on her later). If you can get a Falkenrath Gorger to stick turn one, it allows you to play anything in the deck, essentially. I'm trying 2 right now, but it definitely deserves to be a 3 or 4 of for sure.

Finally, Bloodhall Priest. I have only gotten to draw and play her once, but the 4/4 body with potential burn attached makes me want to try her more. I recommend her in theory, but haven't gotten to try her much.

The rest, in my opinion, (Vampire Cutthroat, Weirded Vampire, Markov Crusader, Stromkirk Occultist, Falkenrath Reaver, and Dusk Feaster) either don't fit the theme of an aggressive vampire deck by either being too slow, encouraging a more midrange or control play style, or by not bringing enough to make the cut.

I hope these tips help, I love vampires and want them to make it in Standard. Good luck!