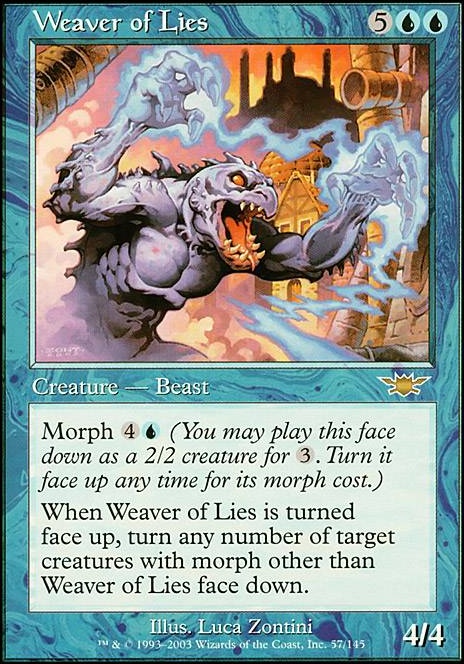 Have you thought about Weaver of Lies? It would allow you to repeat morph effects again.

I flip up Weaver of Lies and flip the 3 mentioned morph creatures face down. Obviously it benefits me for my opponent to not know which one is a combat triggered creature, a flip triggered creature and a vanilla 4/4. Am I allowed to shuffle them on the playing field to keep my opponent from knowing? Or do they have to stay where they are and essentially be known creatures that happen to be face down?

For sizing, the bigger counter point is simply color logic - I know of not a single blue 3/2 for 2 blue mana. the closest comparison is Gilded Drake , which while a 3/3 for 2, is given to your opponent as opposed to kept on your side of the field. searching the gatherer for creatures costing "UU", the majority are 2/2s, with a few 1/2s, 2/1s, and the odd 1/4 or 4/1.

I am forced to agree with cdkime - "sliver" is more than a powerful enough mechanic to begin with. especially since morph is less useful to slivers than any other tribe, as the creatures face down have no creature type. the ability to turn face up is much better for triggered creatures, such as Voidmage Apprentice or Weaver of Lies . Creatues without a "when this card turns face up" typically just have a larger mana cost that can be paid over 2 different turns, and that's it.

random tidbit for you Flooremoji, Stronghold Machinist and Stronghold Biologist are two sides of the same picture.

Keep up the good work and good luck!

Lord of the Lies

No Weaver of Lies? I consider that false advertising.