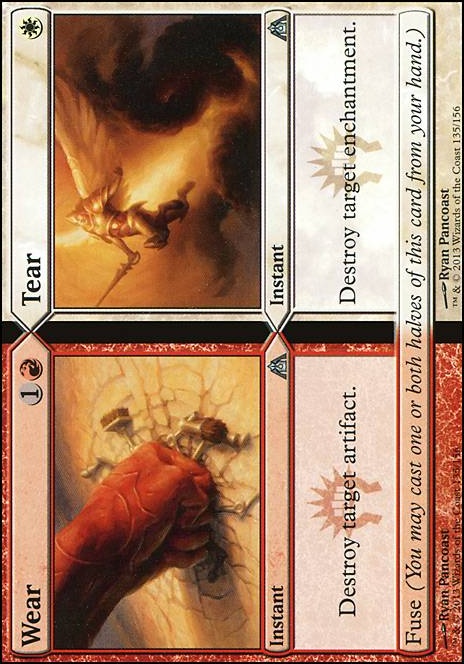 Wear occurrence in decks from the last year

Tajic, Two Arms, Too Many Swords
by Johnthetrump

Oros the Revenger
by girlyvader

Kaalia, the Multiverse Ender
by EzraTerrestrial

Rather than those soldier makers or another anthem effect, I would worry about adding in more instant speed removal or hatebear effects. Path to Exile, Wear//Tear, Aven Mindcensor, Abrade, Fire Covenant, etc..

You have plenty of great creatures, just need things to clear the way for them as well as things to prevent you from losing on the spot

Hope this helps! I havenât played against it yet, but thatâs my impression based on stock lists.

Sorry Iâve been offline for so long! I hope to answer all recent posts.

Mellro thank you for the compliment! As for Lantern Control, itâs not so much what you side in, but how you play against it. Itâs about learning the timing (when to fetch, when to go wide with creatures, what to remove and when). You want artifact hate, so side like Affinity/ Hardened Scales . Side in artifact hate rather than spot removal, and more creatures for a clock. Kambal, Consul of Allocation is nice against all their non-creature spells. Maybe side in more Wear overall. Hope this helps!

YamishiTheWickedOne Iâve seen the deck What a Horrible Night to Have a Curse and I love it! Really similar to my mono black vampires. So... Seasoned Pyromancer ... I LOVE IT!!! I think itâs what Mardu needed. In my opinion, an auto-4 of in the build, for 2 Bedlam Reveler and some other spells/enchantments/planeswalkers. The increase of creatures in the build makes Unearth more and more appealing.

JacenSolo29 yep! You are absolutely right! Iâm play testing different ratios so itâs not current, until I find the exact ratio I like. So... yes: my build is horrendously out of date. In all seriousness, I do want to ask your patience and understanding while I work on it. Thank you!