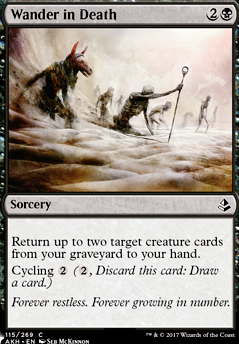 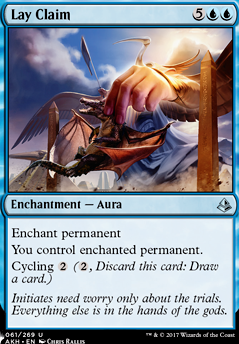 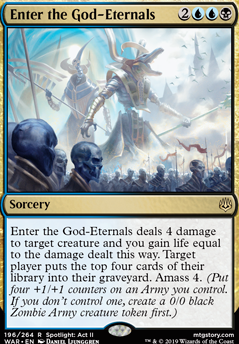 I like Urborg Uprising or Wander in Death over Soul Strings.

In a super limited format you need to net as much bang for your buck as possible. The cycling with Wander in Death can help a lot in a pinch. Also the draw from Urborg Uprising is super nice.

I always try to play spells in pEDH that give me options. I feel that you are going to be paying close to the cost for the above noted spells when you attempt to cast Soul Strings anyway that the hard cast costs make sense even though they are a bit more than Soul Strings. pEDH games tend to last a while so accumulating the larger amounts of mana required to cast those spells is no skin off your back. In pEDH it's more about gaining control mid to late game rather than in the beginning.

I haven't played Standard in well over a year, but I'll do my best:

I'm looking at picking this decklist up, thought I'd throw a comment here with the few changes I'm making:

Abandoned Sarcophagus for Archaeomancer Cycling deck. It's a free "cast all of these now that you need them" as opposed to just bringing one back.

Also Search for azcanta for Sacred Excavation times where you are having a little bit of difficulty getting the cycle going.

Approach of the Second Sun for Wander in Death oh look, a win con for one card slot in a cycle deck, hard to say no to this.

Countervailing Winds for Eternal Dragon. Super expensive/technical/limited Squee the Immortal, that's just a 5/5 flying with plainscycle (you have quite a number of landcycles already) doesn't feel too great, I think personally I'd just rather a super hard counterspell, will be making more than enough flyers with Drake Haven as it is I feel!

I really want to find room for Nimble Obstructionist and Grasp of Fate but I just can't see what else to take out, because the pieces you have in here are really decent.

Shefet Dunes for a plains OR steppe? (strong if you pump out a fairly reasonable bunch of drakes and even Migratory Route or Rise from the Tides for a power play, probably won't kill anyone with high health, but excellent for executing 15-20 hp with fliers, or forcing them to burn valuable resources to stop it, for one land).

Ipnu Rivulet for Island. Graveyard filler, Second Sun chaser, Helps you push for some cycle cards too, in a slightly different way to a flipped Search for Azcanta.

(I'm a filthy azorius second sun/drake haven player, so I'm loathe to part with them if I can fit them in a deck for another format too).

Considering that many of your creatures either outright want to die or enter a situation where they can easily die (combat), you might want to consider cards like Phyrexian Reclamation, Grave Upheaval Wander in Death for the situations that you find yourself with many desirable creatures in your graveyard. I'm particularly fond of the last two - cycling is a very powerful ability for trading away narrow/dead cards for a good shot at a better one, and 3-color can always use more ways to dig for its color fixers.

Amonkhet Approach of the Zombies