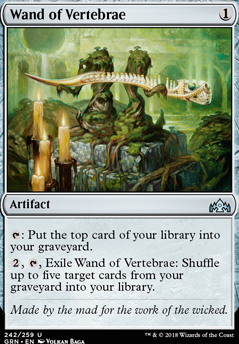 : Put the top card of your library into your graveyard.

, , Exile Wand of Vertebrae: Shuffle up to five target cards from your graveyard into your library.

Syr Konrad the Miller
by Dom171 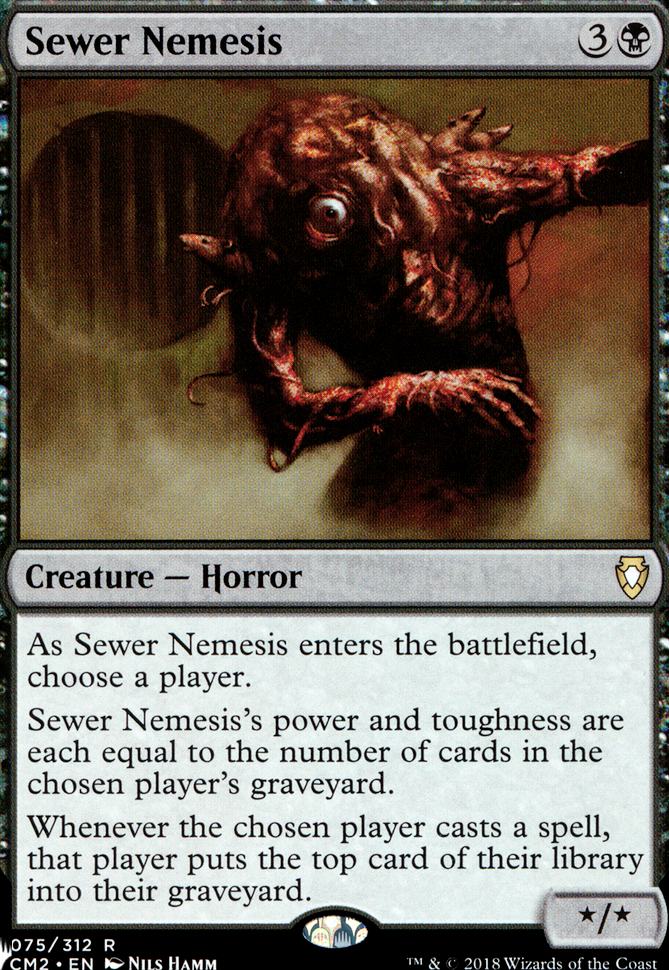 What is dead can never die
by El_Killjoy

ThoAlmighty: Thanks! I've been on the fence regarding Blade of Selves here -- it doesn't help with much beyond my commander, but it's great with him.

Is Azra Oddsmaker that good without any real evasion in the deck? I've never run him personally.

And I've wanted to use Cavalier of Flame here, but it's a little awkward -- lands are usually some of the first things that get exiled to Kroxa's escape, and Neheb does the voluntary looting much better.

I'm not a huge fan of Megrim style effects -- they quickly lose value as you strip opponents' hands.

And I'm running both Codex Shredder and Wand of Vertebrae ! Redundancy, yay :)

I'd say you want to add Blade of Selves , Azra Oddsmaker , and Cavalier of Flame from the maybeboard in exchange for Sewer Nemesis , Final Parting , and Rotting Rats . Maybe find space for Megrim -like effects as well? Also, I like Codex Shredder over Wand of Vertebrae as it can mess with top-of-the-library tutors, get something back in a pinch, and turn a Vampiric Tutor into another Entomb. Sweet deck!

heckproof on I need help replacing a ...

Wand of Vertebrae is a worse card, but I think itâs probably the best option if you donât feel like splashing for Tamiyo.

Hello my fellow planeswalkers! So if you have been following my deck closely you will see that I made a few changes to the main deck when I added the new sideboard. As the nature of the online meta has changed so have I also had to evolve.

The easiest change to make was to relocate Lava Coil to the sideboard. Against creatureless decks it would just end up being a very dead card in the hand. I could use it against my own creatures to gain a counter on Runaway Steam-Kin but that typically is not a worthy trade. Heck of a useful card though. So I upped the count to 4x and swap them in pretty regularly.

The next change was to my mana base. I popped out one Mountain and traded in a Field of Ruin . I had been messing around with Wand of Vertebrae and just never achieved a decent feel for it being functional or actually doing the job I was asking of it. Typically you would use it to help clear dead cards from the top of your library while Experimental Frenzy is active and to help stack your deck with more 'action'. I just never found it to be reliable with my setup. Perhaps it works well for other players but they arent me and I am rather discerning. The Field allows me to blow up whatever land I despise on my opponent's side, thin my own deck, shuffle my library, and bring an untapped mountain on to the field. Just... Heckin yes. Obviously with only one in the whole deck, your chances of reaching it are slim, but thats sort of the point. It doesnt distract from your overall strategy but allows for nice maneuvering when you find it.

With the extra space I had left, I installed an extra 'frenzy' and another Risk Factor . The latter just being the biggest mindgame card of the deck. Every choice is the wrong one. Blue players know what I am talking about... Lol.

Well thank you for reading my update blurb. I hope to see some of you out there rocking your own versions of this beasty. It pulled me all the way thru the Gold tiers on arena and was so good I actually went out and put this deck together on paper as well!

Learning to pilot this one well can definitly help you develop as a player. Great for newbs and pros alike!

Cutting you deck down to 60 cards would be a huge improvement. You have a lot of underpowered cards, so cutting your deck down to minimum size would make you get to your best cards more consitantly.

Rescue could go. With this few (good) etb triggers, it's not going to be that impactful, and you don't want to bounce your artifacts. (Or it could just become an Unsummon if you got one)

Ceremonious Rejection Seems very specific, but you do surveil a lot, and the card is pretty good, so it may be fine, but I'm not loving it. (Or is it a meta thing?)

Realmwright doesn't seem too useful. I guess it can help you cast Dread Shade, but that's pretty niche.

Amulet of Safekeeping also seems a tad too specific to be good, unless it's a meta thing, (but again, surveil help you get rid of it easily).

Wand of Vertebrae Is probably too RNG to be any good.

With the boosters you've opened, I'm willing to bet you've got some Dimir Guildgates or even Watery Graves, and a couple fixers would be a great addition to the mana base.

Also, I'm sure you've got some Discovery / Dispersal, which is one of the greatest survel cards.