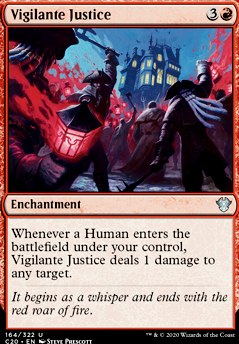 Whenever a Human enters the battlefield under your control, Vigilante Justice deals 1 damage to target creature, player or planeswalker.

The Culling of Drannith - Trynn and Silvar EDH
by Wolfen5207

Mardu Humans and their Cat
by HappHazard

Oh yes!! Was trying to scryfall cards with etb do damage abilities. I ran into Vigilante Justice but not sure the 1 damage from stagg and his twins is worth it. Lower costed though. :)

Fiend Hunter is always a good idea in a white deck.

Throw in a few sac outlets like Phyrexian Altar and Ashnod's Altar and you can generate infinite mana with the Hunter + Angel of Glory's Rise.

Kessig Malcontents and/or Vigilante Justice turns that combo into a machine gun that kills all of your opponents.

Greater Good lets you put every creature in your deck into play (with Haste from Samut) at once by saccing the Hunter to draw one and then putting them into your bin to get brought back by the Angel.

Throw in Grand Abolisher so your opponents can't disrupt the combo once it gets started (also maybe Dragonlord Dromoka if your're willing to make the exception on Tribe) and then laugh.

I think GRW is your best bet, too :) Red gives you access to enchantments like Vigilante Justice, white gives you Elder Cathar, Devout Chaplain, and Unruly Mob, and green affords you Deranged Outcast