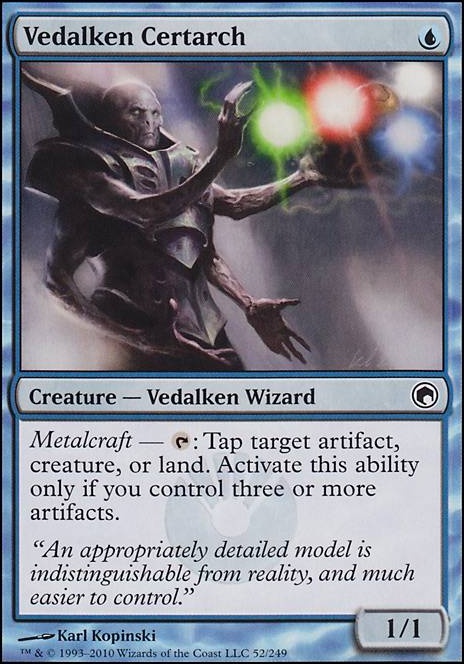 Metalcraft Â Tap: Tap Target artifact, creature, or land. Activate this ability only if you control three or more artifacts.

sTAPx (sit down now)
by Epicurus 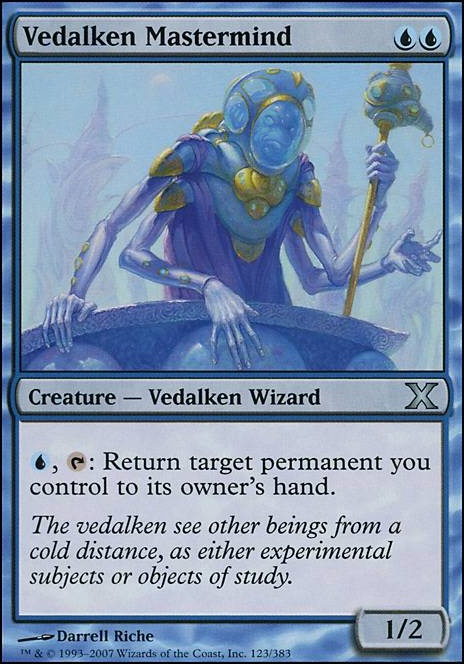 Botanicum81 on Royal Assassin Out of Retirement

RoarMaster Vedalken Certarch is a possibilty because I am looking into using Investigate mechanic and using several artifacts in the deck.

RoarMaster on Royal Assassin Out of Retirement

Vedalken Certarch But you probs wont have the craft for it.

I'm really surprised I don't see an Unwinding Clock here. It combos with your board lockdown really effectively, giving you access to all of your artifact mana on everyone's turn. If you manage to get Teferi's emblem and The Chain Veil out alongside Unwinding Clock, you can activate all your planeswalkers' abilities twice on everyone's turn assuming you have enough mana rocks untapping to pay for it (which you should at that point.)

There's also Darksteel Forge to make your mana base harder to remove.

If you want to really play with Winter Orb, you can include permanents that allow you to tap it on someone else's end step. That way, you have access to all your lands while everyone else cries in their soup. Some options are Amber Prison, Clock of Omens, Merchant's Dockhand, Rust Tick, Vedalken Certarch, Inspiring Statuary, and Whir of Invention.

In fact, you should probably add Whir of Invention to the deck anyways, great way to tutor out an artifact and put it on the board.

You should have Arcum Dagsson as well. The ability to tutor out any artifact in your library simply by sacrificing an artifact and tapping him is OPAF.

This is not even competitive in modern, let alone freeform.

Scourge of Fleets may be flavourful but at that cost its just bad.
Vedalken Certarch has no place in this deck, without artifacts its useless, maybe try something like Cursecatcher if you want to stick with the merfolk theme.

So if you want to make a merfolk deck, then maximise the number of merfolks, aka. no other creatures. This allows you to get the maximum out of your tribal lords.
Traditional merfolk list tend to heavily abuse the interaction of AEther Vial + Merrow Reejerey , and play as much cantrips as possible, like Silvergill Adept
If you want some distruption you could try adding red for Jori En, Ruin Diver, Blood Moon - which works nicely with the two blue cantrip land denials Spreading Seas & Aquitect's Will

OK, let me rephase again: you have not made a control deck, but a tempo deck, which is good in its own but it is currently mislabeled as control. Tempo is a deck type that aims to trade resources like cards in order to disbalance the opponent and strike at an opportune time with small creatures.

For some more control, I would recommend Phyrexian Revoker - great against mana dorks and Lilianas, Hangarback Walker - great in the mid to late game, Vedalken Certarch to limit their options, Lodestone Golem - taxing the opponent is very good on 5/3 body and Stoic Rebuttal to control even more.

Shroud and Hexproof only stop it from being targeted, not global effects.

Icy Manipulator and Vedalken Certarch both tap down the urn.