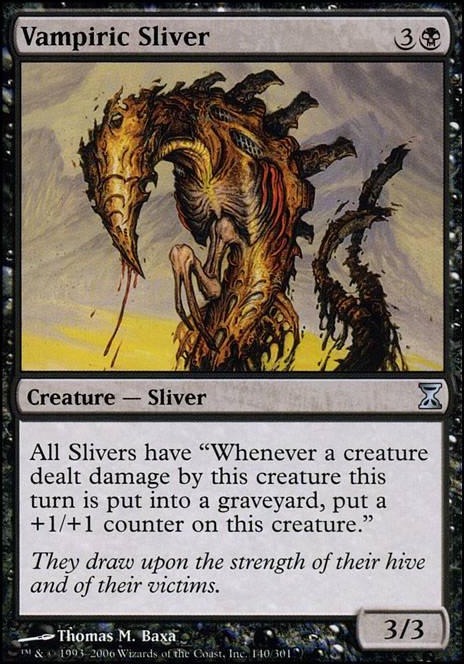 All Sliver creatures have "Whenever a creature dealt damage by this creature this turn is put into a graveyard, put a +1/+1 counter on this creature." 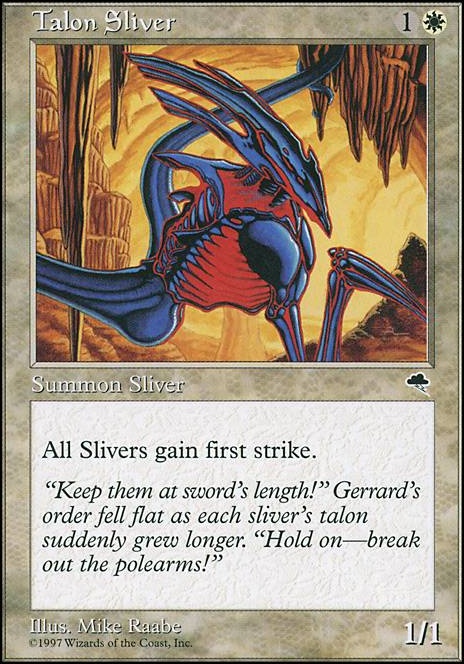 The Infinity Hive
by True_Neutral

In prep for working in some new slivers from Modern Horizons, I've made the following changes:

I've found the ones coming out generally not useful (though the changeling has saved Seedborn Muse once or twice.

I'm hoping the new ones will work better and help me with cascading once The First Sliver is put in.

note however that from a strategic standpoint, Vampiric Sliver probably isn't the best way to buff your slivers. it provides no immediate impact on board state the turn its played like a Predatory Sliver would, and the latter costs half the mana. Vampiric Sliver is also reliant on your creatures being already able to survive the combat damage step. your opponent won't attack if they know your creatures can block and survive, and they won't block either unless they know their own creature can survive combat, because otherwise they would know they're just feeding you +1/+1 counters. so you have to either put the opponent in an unfavorable position where they are forced to block, in which case you're probably already winning, or you have to pair Vampiric Sliver with removal spells like Terminate or Fatal Push.

yes Vampiric Sliver would stack. if you have 2 or more on the battlefield simultaneously, all slivers are treated as having 2 instances of the ability, and each one would trigger separately when the conditions are met. all triggered abilities and power/toughness buffs will stack, but multiple instances of the same activated or static ability will provide no additional benefit.

First: try to make it Modern Legal, considering the meta we are playing in. (remove Vampiric Embrace)Then, take out Vampiric Sliver as it is not doing anything in a Vampire deck. Try to replace it with Kalastria Healer which would work ok with Vampire Envoy. However, if you want a Vampire Ally deck, you should add more Ally creatures. Mephidross Vampire, I like it but in my opinion is too costly for 6 mana. Vampiric Fury is the only red card here. Consider Feast of Blood and Kalastria Highborn.

Your land base, I would suggest 22-24 cards, and in order to keep it simple, keep it mono black. Later on, should wish to have something fancier, add red.

Cool, just to clarify, the Striking Sliver would get two +1/+1 counters for the creature it dealt damage to entering the graveyard from multiple Vampiric Slivers

Does - All Sliver creatures have "Whenever a creature dealt damage by this creature this turn dies, put a +1/+1 counter on this creature." - stack with multiple copies of Vampiric Sliver on the battlefield. For instance, I have two VS's in play and Striking Sliver triggers said ability, would it get two +1/+1 counters?

Got the 404 page not found error again in Rules Q&A, so I had to post somewhere.