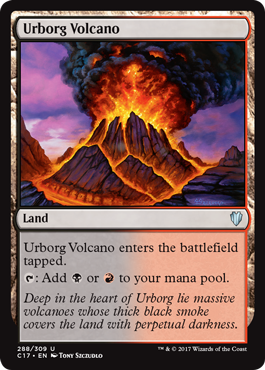 Urborg Volcano occurrence in decks from the last year

Is this the commander your talking about? I think with all the dragons Dragon Tempest would be good for the haste and the additional damage (X based on # of dragon you control).

Blinding Fog is a bit high CMC, I might pass on this one, there are others (lower CMC) that do this job.

Urborg Volcano is a no, anything that just ETB tapped not the way to go for sure.

Command Tower is a must include.

Hellkite Charger + Sword of Feast and Famine can get you Infinite Combat Phases, could be a good finish.

Skithiryx, the Blight Dragon is always fun, and has regenerate.

Steel Hellkite can be good removal.

Bladewing the Risen can recur other ETB dragons, and pump with infinite mana (say from a Worldgorger Dragon make infinite mana)

Just some initial ideas, but I'll have to get my head around exactly what the game plan is with the dragons tomorrow when I have some time.

I see the ramp now. The cluestones and outpost don't fit well in my opinion I'd replace them with something like Lingering Souls or remove them completely. I understand Darksteel Ingot .
I'd consider adding Path to Exile , something like Soul Snare (idk the good cards), Oblivion Ring , Darkness or Deafening Clarion instead of Rakdos Cluestone , Veinfire Borderpost , Gatekeeper of Malakir (hard to cast with 3 black) or Syphon Mind .
Good ones to add from your maybeboard could be Blood Artist , Adanto Vanguard instead of e.g. Falkenrath Marauders , Gatekeeper of Malakir .
I'd also replace the ETB tapped lands Urborg Volcano , etc. with basic lands, the tapped lands are slow.

May be I must change some W/R lands on B/R? I have Rakdos Guildgate and Urborg Volcano from original Edgar deck, but they also come into play tapped. What about creatures and spells? May be is something "musthave" for this deck?

Hey, Sage of Fables works well with Marchesa, Viscera, Haruspex, Disciple of Bolas , Puppeteer Clique , Sower of Temptation , etc. It also can be a draw engine by removing +1/+1 counters from your creatures.

To help the less than ideal manabase consider Trophy Mage just to tutor for Chromatic Lantern ? Or she can get Ashnod's. Consider Brainstorm , Ponder , Impulse , Read the Bones to help to find lands or other cards? Another way to help the manabase is with more mana rocks Rakdos Signet , Izzet Signet , Dimir Signet , Fellwar Stone .

Lands that won't break the bank to consider adding: Exotic Orchard , Choked Estuary , Foreboding Ruins , Grixis Panorama , Ash Barrens , Dimir Aqueduct , Rakdos Carnarium , Izzet Boilerworks , Reliquary Tower , Smoldering Marsh , Sunken Hollow , Shivan Reef . Most of these lands have good interaction with basic lands since there's a lot of them here and I suggest adding more in place of the lands that ETB (enter the battlefield) tapped such as Urborg Volcano . The Bounce lands (Aqueduct, Carnarium, Boilerworks) work well with basic lands and other lands that can ETB untapped.

If you like some of suggestions I offer help to make cuts. By the way there's 2x Skullclamp here ;)

I don't think it's ever worth it to run Rakdos Guildgate or Cinder Barrens or Urborg Volcano especially since you already have plenty of other better dual lands in the deck. Honestly it's better to even just have basic lands in their place.

Would you trade your Teferi's Protection, Path of Ancestry, New Blood, Patron of the Vein, Heirloom Blade, Blade of the Bloodchief, and Urborg Volcano?