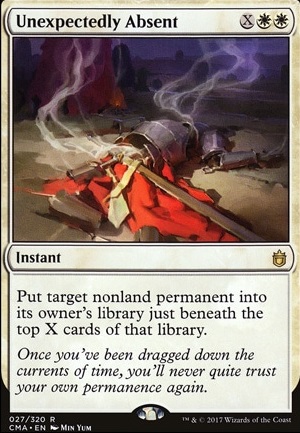 Put target nonland permanent underneath the top X cards of that owner's library.

Unexpectedly Absent occurrence in decks from the last year

Glad you found it useful. For some reason I forgot to mention Unexpectedly Absent . 2 mana instant speed way to get a card off the field is nice, even if it does go to the top of the deck.

So after our games today I have some ideas. I like stuff like Azorius Charm that puts stuff on top of your opponent's library. It can set up a cast with Daxos or just act as an exile spell. Hinder and Memory Lapse are options and could replace one of your less impressive counterspells. Unexpectedly Absent is kinda Spin into Myth is also not bad. AEtherspouts could also be good. Generous Gift is a new one I really like in white. Im sure there are others i'm not thinking of. You could probably cut a counterspell or two. I don't like Distortion Strike much or the permanent exile things like Oblivion Ring . I would definitely add Sword of the Animist . Sword of Sinew and Steel is affordable right now and offers him great protection. I'd cut the lands we talked about earlier and go up to 36 or 37. Another 2 mana rock, like Coldsteel Heart could be nice. I'd consider some supporting creatures. Sram, Senior Edificer Solemn Simulacrum Burnished Hart Hanna, Ship's Navigator Auramancer Mother of Runes and Sovereigns of Lost Alara come to mind

Chhris thx for vommenting[Comment and Vote]. I really wanted to keep Ajani, Adversary of Tyrants because its use in the deck. It puts counters on Ghave, it recurs some combo pieces of necessary, or if it reaches its ultimate, it really goes off, giving me so much stuff to do. If you think its unnecessary I can still remove it, but this is my opinion. I agree though that Vivien Reid doesnt fit in very well, I just had it in my hands and decide to use it. Probably replace it with Teysa Karlov because it works great with Blood Artist and such or some type of removal. I am on the line about Ephemerate because its capability Probably am going am going to replace it with Unexpectedly Absent

Maybe Teysa Karlov to try abuse the death triggers? I dunno much about making Ghave good though, so I'm unsure if she's suited to the 99 here. The only other thing that stood out to me were the Planeswalkers, only because they seem like 'do nothing' kinda cards that may just sit unused in your hand -- they don't seem to optimize your strategy. I also think Ephemerate is good for you to protect your board or combo, and is better than Unexpectedly Absent . I'm also a big fan of Oblation .

Falkenrath Noble is honestly the first card I plan to cut to get Cruel Celebrant out. Its lower on the curve, meaning that I can play it out more easily. As well, in a pinch, I can also use it with Teysa to exile a creature

The removal package does need to change a bit. Fleshbag Marauder , Necrotic Sliver , Plaguecrafter , Shriekmaw , Despark , Tragic Slip and Unexpectedly Absent are on my list of includes, with Shriekmaw and Tragic Slip being on the lower end of the removal additions. I like Fleshbag, Plaguecrafter and Necrotic Sliver, because they can always sac themselves and make a white token that can now be used to exile another creature. Despark and Unexpectedly Absent are more instant speed removal for "any" targets.

My goal is to hopefully swap out some of the creatures that say "non-token" creatures, for things that just care about "Creatures". Darkest Hour I feel will need to be slotted in eventually for combo potential, but I gotta have something to combo it with, whether its Altar of Dementia or a Blood Artist like effect. I don't think I need to worry about "how big" my tokens get, but its more so "making" tokens. I need stuff that isn't reliant on ETB, because some of the higher tier decks run Torpor Orb , thus I'm looking for things with on death triggers or on cast. God-Eternal Oketra is the best case scenario, because it can make tokens BUT it also can be sacced to exile something in a pinch and then just put it back in my library. Dreadhorde Invasion is just a worse Bitterblossom .

I will need to manage my sac outlets that "Do things", and not just adds mana or anything. I'd like to include more creatures that are easily returnable, such as Bloodsoaked Champion , Bloodghast and Gravecrawler (though I don't run enough Zombies to make it able to cast from the graveyard).

I REALLY want to try Aetherworks Marvel in the deck! Just the thought of saccing my things or there is a board wipe and then spending energy to cast cards, its basically cheating mana, but you also dig for cards. That means in a pinch, you could Wrath of God at instant speed, get that Path to Exile or even just get additional value out of it