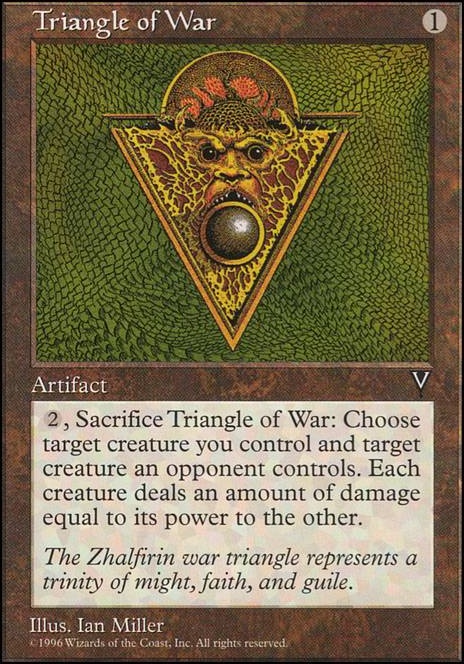 {2}, Sacrifice Triangle of War: Target creature you control fights target creature an opponent controls. (Each deals damage equal to its power to the other.)

On The Hunt
by Gulinth

I would run at least 36 lands with your current curve.
Tutoring up a land is going to be pricey, the easy choice is Sylvan Scrying but my personal fave is Expedition Map.
I would swap Explore for Kodama's Reach, mostly cause you are running low on lands you're not likely to have an extra one in your hand.
You could consider Black Market as another mana source.
I'm not sure about the commander damage route, I think you would have to change to much to make it work. Triumph of the Hordes is probably the better alt-win-con, but it is $$, so I don't know. Maybe you could considered Glaring Spotlight. A mad rush of unblockable creatures could win the game, plus it helps with the hexproof.
Archetype of Finality could help with deathtouch creatures your opponents control.
Are you using Brain in a Jar to cast your sorcery spells at instant speed? I've had varied luck with that card and find I'm stuck with the wrong number of counters more times than not. You may find it slower than you need it to be.
Salvaging Station could do work with Triangle of War, it could also bring back Expedition Map or Glaring Spotlight if you add those.
I would cut the Nessian Wilds Ravager, your assessment is correct.

I would suggest fighting cards within your colors, they synergize with Saskia. Here are a few examples within your color range: Prey Upon, Prepare / Fight, Contested Cliffs, Epic Confrontation, Domri Rade, Triangle of War, Blood Feud

Triangle of War does what Rabid Bite does, and is recurrable with Glissa.

Go for the Throat tends to hit more stuff than Doomblade at the same CMC, though I'd probably run Hero's Downfall over either.

You have Prototype Portal, so I'd find room for Tree of Tales, Vault of Whispers and Darksteel Citadel because spending zero mana to make a land every turn is pretty amazing.

Deglamer or Unravel the Aether are loads better than Springsage Ritual. How often does four life change anything, but being able to deal with a Theros god, a Blighsteel Colossus, a Darksteel whatever, not split Wurmcoil Engine into tokens or trigger someone else's Dictate of Erebos, or deal with someone else's graveyard recursion are things that matter in nearly every single game. Plus they cost two less to cast.

if this is a modern deck, I would recommend adding Nemesis Mask since it is modern legal, and can be reused unlike the Triangle of War