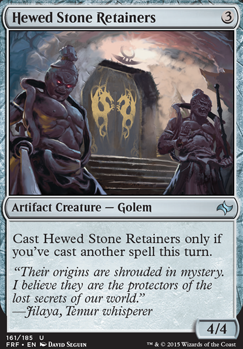 kidimp That's all well and good, but in those games where he doesn't draw a flyer, you don't get to use it. Card-for-card, choosing to put another threat onto the board in this instance, is a better use of a deck slot. If he kills your dude, so what? You killed his too!

One easy (budget-friendly) way to make this "trade" uneven is to have creatures with trample (either with dudes that have trample ( Aggressive Mammoth ?) or a combat trick like Tread Upon or Somberwald Alpha 's activated ability) - even if you die, excess combat damage is dealt to the opponent, so you still got something extra out of it. (Note: there are one-sided tricks like Tanglesap that make this super fun.)

Another way to deal with this is to put out mid-sized creatures (green has plenty) that you can direct to damage the deathtoucher either through fight abilities or through a card like Lure .

What I'm trying to say is that Plummet, while a viable limited sideboard card, probably isn't super strong in your matchup. Were I in your shoes, I would trade out a few mana dorks and plummet for a card draw engine and a mid-level threat or two. a great budget option for an early threat is Sauroform Hybrid , which would couple together best with Colossal Majesty.

Take a look at my other decks if you like the kind of budget advice I give :)

First off, congratulations on your first deck!

Secondly, since you are playing primarily red and green I would suggest playing some taplands in those colors. For example, Rugged Highlands or Timber Gorge.

Since you are playing several landfall cards, I would also suggest more ramp spells like Explosive Vegetation, Nissa's Pilgrimage, and Blighted Woodland. Also, Elvish Mystic and Llanowar Elves are faster than Golden Hind.

@AstroGrumpyCat Switch Tread Upon with Larger Than Life. I think it'd help better.

Does the landfall effect on Groundswell stack if two lands entered the battlefield in one turn? with like Terramorphic Expanse or Evolving Wilds? would be awesome in combination with some trample effects like Sylvan Might or Tread Upon..

Blue modern and no Counterspell or Remand? This would make your deck even more awesome! You can be sure that you'll have plenty of counters coming your way when playing against descent modern deck, there is nothing more annoying than that.

with all the +2/+2's and stuff would make it real nice against massremoval. Nice CMC btw!

skittles10,
This is looking really good; +1!

By the way, you might want to drop by this thread sometime: All things Wolven; it's a fun community. And my attempt at the combo is here: Gruul Wolves (SOI Full Aggro).

Good luck (and good skill) with your deck! Please keep in touch and let me know how it plays!

Since you've asked for help, I offer these suggestions in the spirit of friendly competition.

You admit how your deck resolves around one creature in play, yet you lack sufficient card drawing effects. The only card draw effects must first have a creature in play; no luck if mana flooded or screwed. May I suggest reconsidering Feed the Clan in light of Pulse of Murasa. Paired with Tormenting Voice, you should gain life and replace lost creatures (especially your main creature).

Essentially, I feel like you created an Izzet Prowess deck with Elusive Spellfist or Umara Entangler. Given your average converted mana costs, I think you have too many lands (25) when compared to other, similar, tournament-winning Izzet Prowess decks. While I applaud your creativity, please know how those common decks win, and build around a similar strategy, one that doesn't confuse Lightning Berserker with Mage-Ring Bully.

These are just my thoughts as a regular Standard tournament player. Play and have fun!

Brute Strength over Tread Upon?

Also Center Soul seems like it could be good to put back into the sideboard with those spots opened up from Battle Rage. If Eldrazi is less prevalent I would even try and find room in the main again.

Nothing else I can think of right now