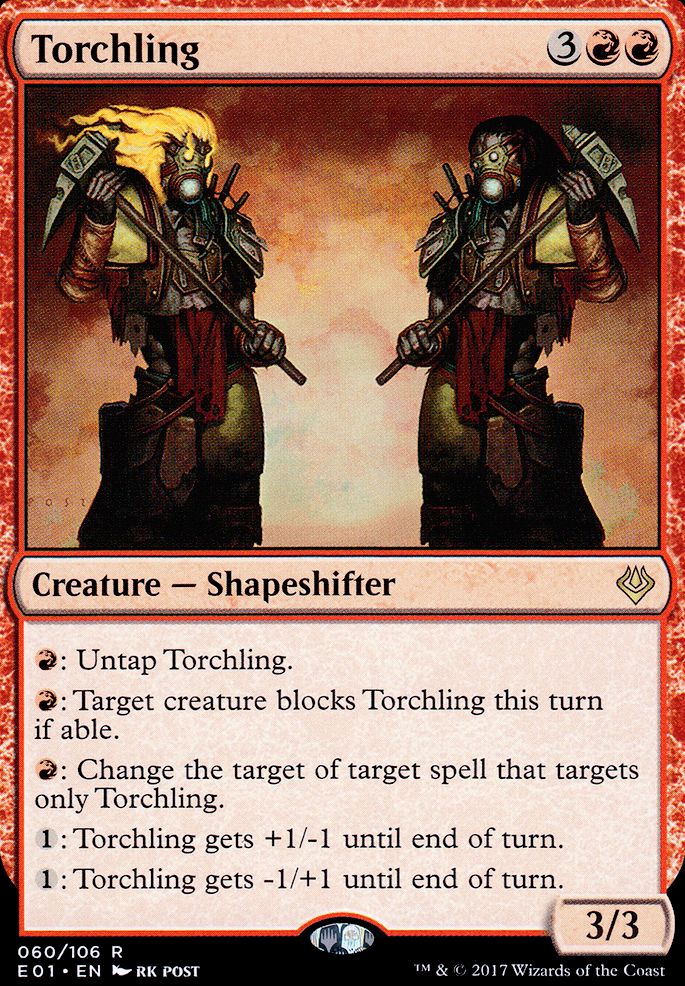 : Change the target of target spell that targets only Torchling.

The Worst Voltron
by Wizroberag

The Evil Has Landed
by Confuzzledmaniac

Ryanh12 the AEtherling is indeed the main way of flickering Mairsil. This is probably a last resort though in the case that the other combos cannot be executed. The main cage target for Mairsil is Mirror-Mad Phantasm to put your entire deck into your graveyard and infinite combo from there.

I used to be running a less combo and more value Mairsil deck if you are interested. It ran creatures like Torchling for additional protection for Mairsil. As well, Shauku, Endbringer was an excellent piece of removal. Additional untappers helped me gain additional value. I thought Soliton and Horseshoe Crab were neat and still have both in foil! Attaining a lock with AEtherling and Nevinyrral's Disk was also quite satisfying.

well we have Morphling / AEtherling , Torchling , Thornling and recently Brightling .... I'd like to see a -ling creature

Still Just a Rat in a Cage

Yo S1ayerMonkey, some cards you can consider using:

I would also suggest some synergy cards like Read the Runes as you don't really care what cards go into your grave, as well as Notion Thief when you do your wheel effects. Overall Mairsil is a damn fun commander :P

I really like how there is now a white equivalent of Morphling, Torchling, and Thornling: brightling. Hopefully, there shall eventually be a black equivalent, to complete the cycle.

With the printing of arena rector, a reference to Academy Rector, will there eventually be equivalents that search for artifacts, creatures, and lands?

How is fan favorite black? Black is the least cooperative and most selfish of all the colors, so I believe that it should be either red, white, or green, the colors of community and cooperation.

Lets Pretend We Don't Have A Combo!

CivilizedSin, I use Torchling as a replacement for Morphling (reserved cards sometimes are impossible to find), but it's weaker in so many situations. And I won't run both, it's just an overkill. I also used Avatar of Woe, but I've found it to be on a weaker side of tap abilities. I'd rather tap to draw 3 with Arcanis the Omnipotent. So I prefer Galecaster Colossus as a removal of choice, because it deals with almost any permanent, doesn't need haste and can tap some other wizard (wich I have plenty of) for activation. The deck is a blast indeed, my favourite commander of all time by far! :)