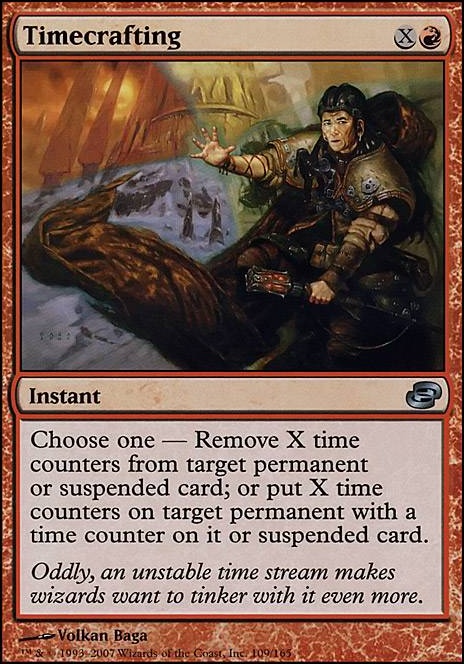 Jhoira, Try not to Die
by goldcakes

Eldrazi be cheatin
by LegendaryPancake

Suspended in Disbelief
by Izzy-

Jhoira not the time yet (budget)
by Nickals-Tresarry

I had a different take on her, mainly since my playgroup doesn't allow for MLD and turns: with this I mean that I used to run them, but then decided not to.

I like how you have a strong instant speed package and tutor package, I'll look forward to implement something similar myself too.

I would suggest to swap your 3 CMC mana rocks for 2 CMC mana rocks, as CMC 3 is on the same curve as your commander. You should prioritize ramp in the early turns: nobody wants a Mana Geode on turn 5. This speed advantage would also allow for Jhoira + suspend something on turn 2 (with a Mana Vault / Sol Ring and a 2 CMC mana rock on turn 1). In this regard I can suggest (just to name a few):

Also, for some more time counters control, I would suggest Shivan Sand-Mage .

As an alternative way to cast big spells when Jhoira is unavailable, I suggest As Foretold , since it can interact with all those cool time-counter cards like Timecrafting . It's pretty nice to have if you like casting free stuff also during you opponent's turns, being them instants or whatever else if you have a Leyline of Anticipation sticking around.

While more than a simple mechanic, Experience Counters commanders in allied colors in a new precon would be nice, even though these wouldn't be forgotten mechanics.

I'd like to see some more Tribal Spells that take advantage from actually being played in their tribal, awarding us with some bonus effect, whipe still being playable without the tribe, but without bonus.

I'd like the comeback of my favourite mechanic, Suspend, as seen on Jhoira of the Ghitu . If not that, more cards that work with time counters, as we've seen with As Foretold , that can combo off with much older cards like Timecrafting .

Lets say I used Jhoira of the Ghitu to suspend Apocalypse. If I were to cast Timecrafting on someone else's turn to remove the remaining counters, would Apocalypse be casted after Timecrafting resolves? If not when would it be able to be casted? If I did it with a creature would it be the same thing?

have you thought about including Tamiyo, the Moon Sage? WithTimecrafting you can just go ham with Jhoiras' ability