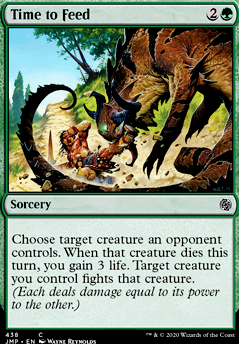 Iâd swap out Sedge Scorpion for Hexdrinker , as it can grow to be something useful (iâm not too sure why youâre running the scorpion to begin with?).

Other creatures I think you should ditch are Nylea's Disciple and Reverent Hunter - these would both be better served as land and/or ramp creatures (20 land is very low for what youâre trying to do, even with the ramp I think you need 24ish)

Solidarity of Heroes feels like too much of a âwin moreâ card to be useful. I think you should drop it.

Time to Feed just feels like a bad Prey Upon ??

Thereâs two recent cards that might be of interest to you: Gargos, Vicious Watcher and Unbound Flourishing .

If it uses the word target at all it targets. The specific phrase "choose target" is in the Oricle text of 59 cards. It is used when a single effect performs multiple actions using the same set of targets (Capricious Efreet, Confiscation Coup, Time to Feed, etc) or when one player targets a permanent and another player performs an action on it (Unravel the Aether, Deglamer, Ashling, the Extinguisher, Vaevictis Asmadi, the Dire, etc).

Fatespinner79 on Boros or Selesnya variant of â¦

I am new here and I have created one deck for our game group. But I am not sure which variant I should play? Shall I go for Boros or for Selesnya? Feel free to comment any other improvements to the deck that you think would be good.

I own all commons and uncommons of the Ravnica, Return to Ravnica and Theros block twice plus Magic X. Please note that this is a strictly budget deck. I am willing to buy rares as long as they are not more expensive than 1 USD. Also in our group we have the rule not to include more than 4 rares in your decks. This should ensure that the power level of the decks is similar.

Normally we are four or five players and we play free-for-all, two-headed giant and prisma. So the deck needs some defenses.

2 Fall of the Hammer

Really cool deck, +1. At first I was thinking another Vorel of the Hull Clade would be sweet, it's your call though. If it were mine I'd include: 1) protection spells (Ranger's Guile, Withstand Death etc); and, 2) threat removal (Time to Feed or Mutant's Prey for example).

Also, for a weird card suggestion I'm going with Mercy Killing - can be used on your dudes or the opponent's. Has it's uses, especially if Master Biomancer is out and about.

Dromoka's Command could go in for most cards. Maybe replace Time to Feed with Dromoka's Command. Archangel of Thune + Abzan Battle Priest could get hilarious. Throw in a Spike Feeder or even a Path of Bravery for extra hilarity. Wall of Reverence could work really well with Sunbond/Cradle of Vitality/Ageless Entity. You might want to consider Command Tower/City of Brass/Mana Confluence/Temple Garden/Sunpetal Grove/Tranquil Garden .