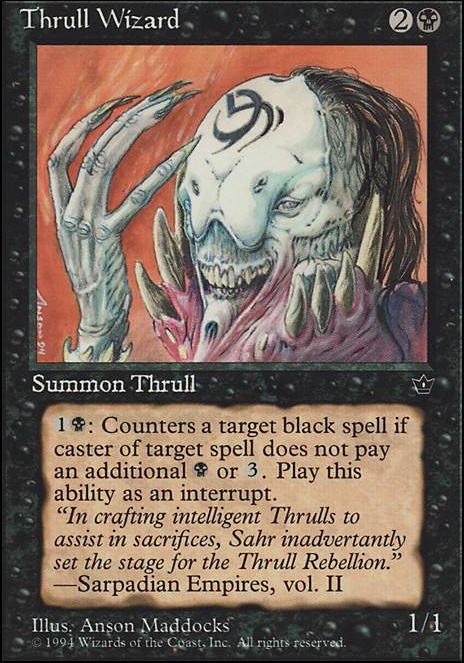 Phage "One Finger Death Punch" The Untouchable EDH
by Anthedron

Get Killed or Die Trying
by porky27s

Phage, touched by an angel
by Asinclair85

I used to play Thrull Wizard but I found it too weak. Putting in more graveyard retrun cards would also weaken the deck in my opinion.

Yeah, Endless Whispers can be tricky sometimes but it's enough to cast it only if necessary, and same goes for the Platinum Angel , so i try to never have them out at the same time.

Both Lich's Mastery and Stunning Reversal were in previous iterations of the deck, I decided to cut them because they weren't reliable enough. Lich's Mastery because the deck doesn't focus too much on lifegain and tends to have a small board (not taking artifacts into consideration since they are often very much needed and I wouldn't want to exile them); and Stunning Reversal because in my meta being at 1 life pretty much equals being dead anyway, so I ended up never wanting to cast it. Maybe in the future I could at least try giving the Mastery another chance, but right now I feel comfortable with the amount of ways I have to cast Phage.

Withering Boon was also in a previous version of the deck, alongside with Imp's Mischief , Thrull Wizard and other more controlly-ish cards. I ended up cutting them in favor of board wipes or combo pieces; they weren't reliable enough as actual disruption and I never used them to put Phage in the yard and pull her back later. The only way I have to get her back to my hand from the graveyard is with Phyrexian Reclamation , so if I were to use Withering Boon to put her there I would basically find myself spending 11 mana, 5 life and 2 cards just to "draw" her, and then I would still have to cast her for 7 more mana. It just wasn't worth it.

For starters, I have already looked at your's and ay.lobo's Purphoros lists at least 10 times. You don't have to keep posting them. I know you've submitted them, and they're on my mind.

Secondly, Purphoros was the first EDH deck I built when I first got into the format, and I've played and updated the deck ever since then, so I know the ins and outs of the deck very well. And believe me when I say you are still using some sub-par strategies in your list. For instance, I can say with certainty that Glitterfang and Lightning Berserker are too slow to be of any real use.

Third, goldfishing Turn 6 wins is no longer enough to get you higher than T3. Since the advent of Paradox Engine, Aetherflux Reservoir, Walking Ballista, new efficient combos like DramaticScepter, and the Protean Hulk unban, nearly everything in the top tiers have gotten a significant uptick in power level. Nearly everything in T2.5 and above is capable of goldfishing T4 wins. The top tiers have so many overpowered cards right now that they could unban Tinker without shaking up the format too much. Purphoros gets a little bit of leeway, since he screws over AdNaus decks so badly, but if I were to put your list up as the example for Purphoros right now, I would have no choice but to demote Purphoros to T3, since it's unrealistic to expect a deck that wins on turn 6 to compete with the upper tiers in this meta.

If you still think that your deck is between T2 and T1.5, then I challenge you to playtest the Arcum Dagsson and Azami decklists from T1.5 and T2 in the description. Both of those can go off on turns 2 to 4 easily, with occasional T1 wins. A Purphoros list would lose to those decks without a doubt 99 times out of 100.

That being said, I appreciate the contention with the current Purphoros list in the description. As ay.lobo has brought up, restricting the deck to just goblin tribal cuts out a lot of cards that synergize really beautifully with Purphoros. However, there are a lot of things that play well with Purphoros, and unfortunately, not all of them play well with each other. The reason we have a goblin tribal deck up right now is that the tribal synergy speeds up the clock of the deck by about 1 turn because of the extra rituals, tutors, and things like Warren Instigator or Goblin War Strike. It's that little bit of speed that's keeping Purphoros in T2.5 really.

I think what needs to happen going forward is to work out how to add the non-goblin cards that Purphoros shines with to a goblin shell that will continue to speed up the deck. Could be super tricky. I've been planning on taking a crack at it for a while now.

spudman3d, A while back I suggested a six tier system in the interest of separating the moderately (mostly) Janky commanders like Chisei, Heart of Oceans or He Who Hungers from the complete trash like Barktooth Warbeard or Myojin of Infinite Rage. (Also, to keep stuff like Chisei from clogging up T4, which clogged up T3, which actually bothered people.)

We tried it for a little while, but ultimately thegigibeast decided that T5 and T6 were so close that functionally no one cared to separate them. He combined them into the current T5, and I think that's fine the way it is.

Also fyi, there are actually some pretty functional Phage decks. Black has the best tutor power and the best graveyard recursion, so you can easily get one of the six ways to get Phage out of the command zone: Sundial of the Infinite, Command Beacon, Null Brooch, Thrull Wizard, Withering Boon, and Kozilek, the Great Distortion. It's stupid and over-complicated for what is essentially a mediocre Voltron deck, but it does function.

Gattison on Help With Thrull Tribal

The best thrulls are WB, such as Mourning Thrull, Kingpin's Pet and Treasury Thrull (which kinda sucks, anyway), but then you wouldn't be able to keep Endrek as your Commander if you went .

Also, check out this link for excellent tribal support: The Bones To Build Your Tribal Deck

I think my point was missed. :/

Say you have Torpor Orb out and play your commander. I play Krosan Grip . If you have Thrull Wizard , you pay 1B and wait a turn. If you don't, Phage resolves and you lose.

About blue, you have Torpor Orb . You cast Phage. I cast Cryptic Command bouncing the Orb. If you don't counter Phage, Phage resolves before you can play something else, and you die.

I think I'd put Thrull Wizard in in any case to have an extra out if someone busts your "not losing the game" artifact at instant speed.

NotSquishedYet, I originally had that in there. It involved Thrull Wizard or Dash Hopes , but there was just too much blue in my meta to justify having it. Might as well put tutors, ramp, or draw in it's place.