Delirium - Thraben Foulbloods gets +1/+1 and has menace as long as there are four or more card types among cards in your graveyard. 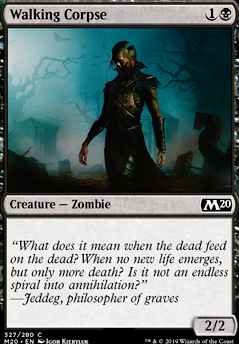 Thraben Foulbloods is a bit weird. 3 mana for a beater is kinda a lot, but a 4/3 Menace is actually a serious clock that a lot of decks have trouble with. It's also not even that bad if our opponent nukes our graveyard since a 3/2 is still an ok threat. I'm also hesitant to cut it since we'd be left with just two Delirium creatures.

That said, I'm not opposed to cutting it, I just don't see anything better in its slot.

I'll go to bat for Shambling Shell, though. That card consistently impresses me. Dredge 3 is a sweet spot where we can Dredge every turn and fill our graveyard efficiently without having to worry S about decking ourselves, it can put itself into the graveyard for value, and 3/1 is a very aggressively statline when we don't care about trading it away. I started out testing it as just a 1-of and I'm seriously consider adding in the 4th copy. It's overperformed like crazy.

Blastoderm looks really nice, though. I'm just not sure where to fit it in. I could see it as a mainboard topend for a version of GB Mid-range that didn't try to go Delirium but for this deck, what could it replace? Maybe something from the sideboard that's less

Overall I worry that you play too many expensive cards whose value isn't guaranteed enough when they hit play, like Thraben Foulbloods and Shambling Shell. I know you want a good card for the 3 spot on your curve, but I feel both of these are pretty weak. I say that, but I don't have any ideas about what to put in their place.

That said, you might want to consider cards like Scythe Tiger who is strong, fast, shrouded, and lets you choose to put one of your artifact lands in play to speed up delirium. I'm also a fan of Harvest Wurm, who unfortunately probably won't work for your purposes since it specifies basic land. Cadaver Imp could be really good depending on how it interacts with your deck, and Unearth goes well with it.

If you want a sideboard replacement for your finishers that is less vulnerable to control, Blastoderm is always a good threat.

Most of my suggestions either stray away from your core deck theme or maybe won't help with it's current form, but I think they're good to keep in mind.

First of all, I highly recommend making this deck Esper colors (). With the addition of Amonkhet there are some crazy new zombie cards such as Wayward Servant and Time to Reflect. Now, I would highly suggest Compelling Deterrence for removal. You could also swap the Glimmer of Genius for a better draw spell such as Painful Truths or Altar's Reap. Drop the Mindwrack Demons for Cryptbreakers and Thraben Foulbloods for Haunted Dead or Relentless Dead if you can afford them.

WitchD0kta I have put in the Combustible Gearhulk and it makes it much nicer top end. I messed around with Thraben Foulbloods but cant find a good spot with it right now. I have been messing around with Dragonmaster Outcast and both the black and green gearhulk. I have not gotten to actually sit down and play it at a FNM yet because I am deployed but online it seems to do ok. Also added in some sideboard cards that I am messing around with. Let me know what you think. Keep the suggestions coming!

you cuold put Satyr Wayfinder over the angler, because it has an ETB effect and it helps the scavenger and the werebear while the angler works with a mechanic that reduce your graveyard. but i'm not really sure about it because the angler is a 5/5. I found Thraben Foulbloods if you want another delirium creature

anyway i will think about something else, in case i'll tell you

If you want to play sin prodder, then may I make the recommendation that you take this deck in an aggro-oriented direction? Sin Prodder is a great card, one I can't help but feel is better than people think it is. Instead of cards like kalitas and 3 ishkanahs, you might be better served by fast, hard to block damage. Thraben Foulbloods could have a niche roll in this kind of deck. You also have a lot of instants in your deck, so maybe Combustible Gearhulk would better serve you than noxious.

Good luck and hope this helps!