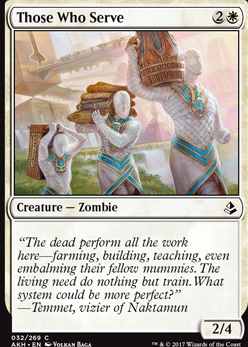 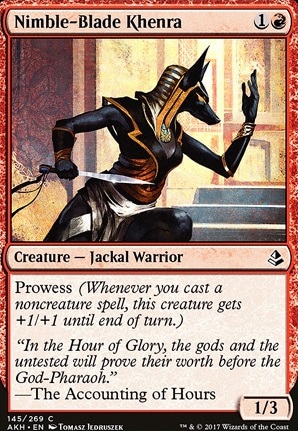 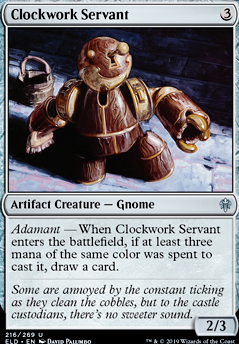 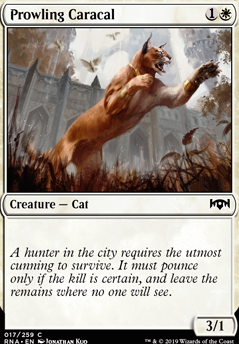 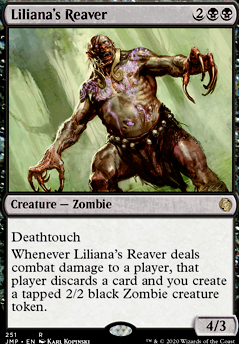 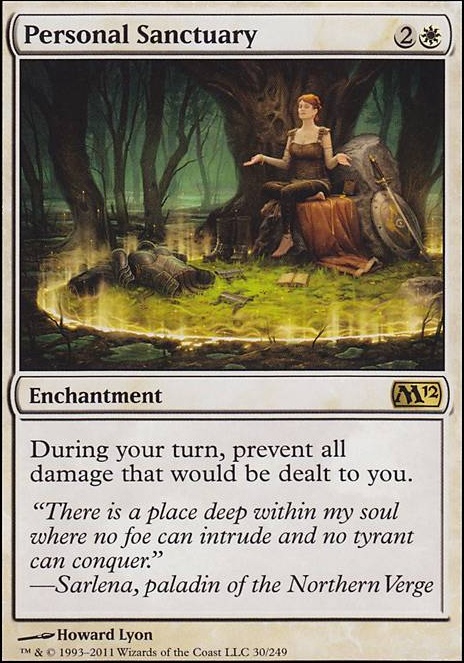 Take to the Skies
by KllrRoboPenguin 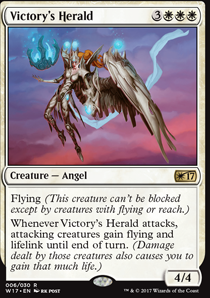 Those Who Serve Discussion

Drop Oketra's Avenger and Bishop's Soldier and Those Who Serve

Of Life and Death - Zombie Deck

18 Lands is absurdly low, even for aggro decks. You'll want 22-24 in a aggro/midrange deck like this.

As far as under performing cards, I recommend removing God-Pharaoh's Faithful, Those Who Serve, Unraveling Mummy, and all of the artifacts in the deck. To a lesser extent, Lord of the Accursed typically under performs, unless the first one lives through the turn and you can drop a second one right after.

Cut Desert Cerodon, Manticore of the Gauntlet, Hyena Pack and Those Who Serve for Hazoret the Fervent and Glorybringer

Fleetfeather sandals isnt worth it, gorgons head is a worse version of Basilisk Collar because its missing lifelink, you dont have enough zombies to make binding mummy worth it, rimebound wont be online too much due to you have 1 snow covered land, and a few other things too that should be cut. I see this is supposed to be a budget control deck but there are still plenty of better zombies for cheap that are better than Those Who Serve.

Epochalyptik on What if WotC had gone â¦

A lot of what people don't understand in that respect is that sets are designed for the Limited environment, where cards that might be unplayable in Constructed can shine. Those Who Serve is perfectly playable in draft or sealed, even though it would never see the light of day in any constructed format.

There's an adage: "if everyone is special, no one is." The nature of deck construction requires that you eventually have to settle on only a few good cards. Whether you get there by disposing of a thousand chaff cards or a thousand semi-chaff cards is irrelevant; you still reach a point at which you've identified the cards that are just better than the alternatives for one reason or another.

Not every card will be good in every format. Some cards may even be bad in every format, but even they serve a purpose: they test a player's judgment in Limited. If every card is playable or exists at a largely homogenized power level, you degrade the game's learning curve and the complexity of the experience it offers.

RazortoothMtg on Hour of Devastation Spoilers

Those Who Serve got bigger: Cool deck! If you watched any of the pro tour last weekend, you already know that zombies crushed it. This might seem like a bit of a copout, but look at the top eight decklists of the PT. You'll get some really good ideas.

Off the top of my head, here are some things that I would cut/add to the deck.

Cut: Those Who Serve, Gravedigger, Fan Bearer (maybe sideboard it), Gideon and Liliana, Start/Finish, Never//Return, Harsh Scrutiny and one or two Binding Mummy. I know this sounds like a lot, but there are plenty of cards to take their place.

I know that this changes the deck a ton, I'm just going off of what the pros did. I do like that you have Plague Belcher, that's one that didn't see much play, but I think it's perfect in this deck.

I hope this was at least a little helpful, good luck!