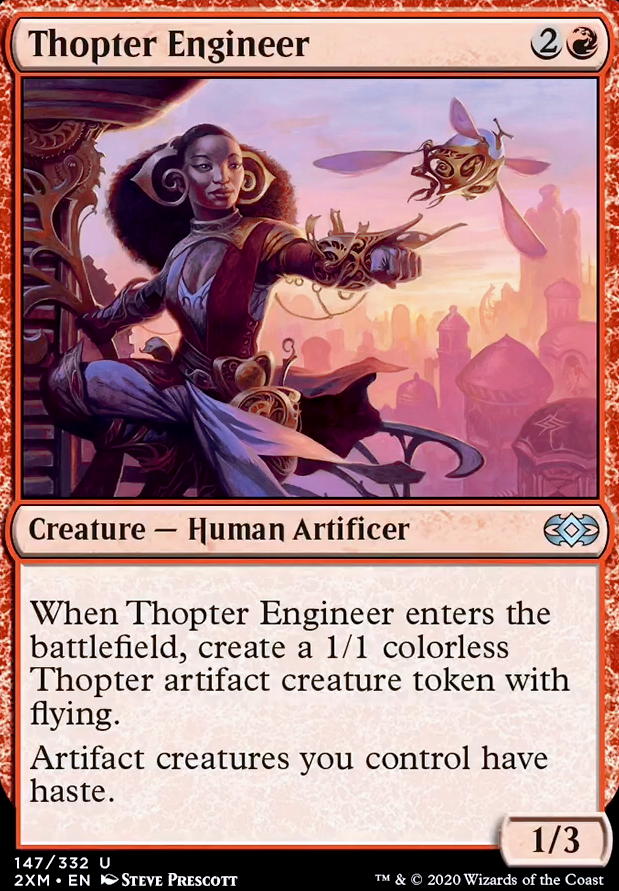 Artifact creatures you control have haste. (They can attack and as soon as they come under your control.)

Thopter Engineer occurrence in decks from the last year

DeathBySprnkles on If a permanent becomes a â¦

I probably already know the answers but just want to be sure.

1.) If a creature is already on the field and is changed into another, for example, a myr token being changed by Brudiclad, Telchor Engineer to a copy of Thopter Engineer due to Splinter Twin or Flameshadow Conjuring , would the effect go off making new thopters?

2.) If a permanent becomes an artifact like using Liquimetal Coating , would Reckless Fireweaver deal damage from the new artifact?

Your deck seems to pull in too many directions, so neither of them are fully realized. You have a dragon subtheme without significant tribal payoff, not even Dragonstorm. These dragons also cost a lot of mana at sorcery speed, so your X-Spells like Mindswipe and such lose a lot of their use an value because you do not have the resources to spare. Vedalken Orrery etc. is not enough to balance this out. Dragons do not at all synergize with any part of the textbox on Niv-Mizzet, nor with your artifacts, apart from Hellkite Tyrant, which is a great card regardless. Your artifact subtheme uses the wrong payoffs, like Thopter Engineer... what artifact creatures are in your deck that need haste? Next to none, so this is a bad card in this context. You have 23 creatures in a deck that should be primarily built around spells and slinging them. Your deck feels very unsynergistic and self hindering because of this. You should pick one of these strategies and run with it, not all of them. You only run 19 instants and sorceries, which is a little above half as much as you want for a spellslinging theme and by far not enough to make an Electrostatic Field worth it. Also your deck lacks mana fixing and mana rocks, which would go together with your artifact theme. You should strife for about 10 pieces of ramp at least in any EDH deck to make sure it can function properly and fast. Streamline your deck, pick one strategy, and add mana ramp to make it run much more smoothly.

If this is not your style, you could also switch generals and embrace another strategy, for example Jhoira. I am not trying to be mean or tell you how to have fun, as I know myself that putting 60 awesome cards in your deck is fun... but being able to cast them is what makes them even more fun, so you should make sure that your deck can do that.