Destroy any number of target planeswalkers. Choose a planeswalker you control. Put two loyalty counters on it for each planeswalker destroyed this way. 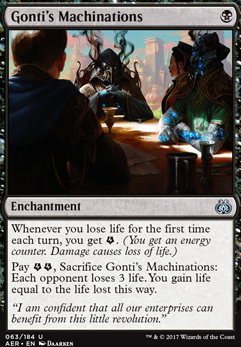 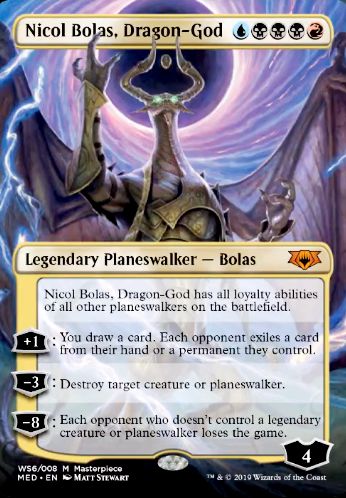 The Price of Power
by nowtdown

ulmo, I've been thinking about your recent suggestions a bit. First of all, yes, I think Bedevil over The Elderspell for sure. The Elderspell is more attractive only really because getting to the ultimate of any of my planeswalkers is almost a wincon. But unless I see a lot of planeswalkers on the other side it really does me little good.

Syphon Mind would be good for the draw, but discard isn't actually a priority for me. Toll of the Invasion seemed good because it's targeted, and because of the amass ability.

Liliana's Reaver and Grave Titan both sound good for my other EDH graveyard themed deck, Cleverly Named Graveyard Deck, because it has a bit more mana ramp. There's definitely some ramp in this deck, but I'm trying to keep the curve here as low as I can get away with. However, Slavering Nulls does for sure sound like a good addition.

I like both Bedevil and The Elderspell, however, because you only have four planeswalkers, at the end of the day I think Bedevil is the stronger choice unless your playgroup rocks a bunch of planeswalkers. There's also Syphon Mind for multi-player if you're still interested in some discard. Then there's Slavering Nulls, a personal favorite, budget-friendly option who's both a gobbie and a zombie. I also highly recommend Liliana's Reaver... and a Grave Titan if you can afford 'em.

The Elderspell helps Ob Nixilis, the Hate-Twisted, too, but I do like the versatility of Murderous Rider and the fact that the kill spell is Instant. I'll keep the rider in the sideboard for now and hopefully get more playtesting in with the deck (eventually). Thanks for your help! I really am enjoying this deck a lot.

If Murderous Rider is too painful, you can sideboard The Elderspell and run Murder main board. I'm not sure how many planeswalker decks run around in your meta but i know teferi, nissa, garruk, and ashiok are all in decks.However, you can also just run many of the burn spells to deal damage to any target. I just remembered you're running red.