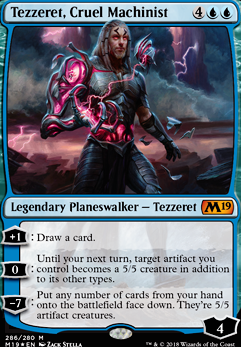 0: Until your next turn, target artifact you control becomes a 5/5 creature in addtion to its other types.

-7: Put any number of cards from your hand onto the battlefield face down. They're 5/5 artifact creatures.

Plot of the Faerie Queen
by Azazlxx1 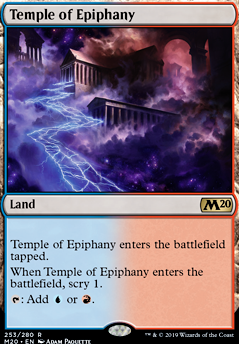 Going for a Jhoi Ride!
by HARDsofty

Gateway to the sun & void

Hey, man! I looked into your deck and I would probably go with a decklist that is a little more consistent. My primary deck is Azorius artifact-control, so this is up my alley.

Essentially, it looks like you are trying to hit infinite mana ASAP. I bumped up your Isochron Scepter 's to max, and dropped all your Sol Ring s in favor of Basalt Monolith s. While at face value the monoliths look lesser, they go infinite on their own with Isochron and Basalt Monolith + Rings of Brighthearth are a complicated, but instant two-card-combo.

Azorius is awesome at control, but can run a little slow compared to some other color combos. A little stax/pillow fort components like Propaganda and Ghostly Prison should keep people from swinging at you as often and you have mana for days.

I trimmed down your creature base so that you had a higher probability of going infinite and added two Palladium Myr s to help that process along. Render Silent and Supreme Verdict can save you from other control decks, and you shouldn't have consistency issues at all, so I pulled a few copies of Tinker .

Your win cons are Infinite Mana + Sands of Delirium , swinging with a Metalwork Colossus , or just hitting that 0 button on Tezzeret, Cruel Machinist and swinging for lethal. I know you are put against mill semi-frequently, so I tossed in a Leyline of Sanctity (which is being re-printed in M20!) and I pumped up your land-base to just below the standard for a 60 card deck (24 lands).

I did not go through and hyperlink everything, just new cards I have added.

I like this deck. One of my favorite planeswalkers to go with, if I have any, is Tezzeret, Cruel Machinist . Many people don't like it but it can have its uses.

sylvannos on Only three people turned up ...

@Jimmy_Chinchila: I haven't played Standard on paper since Theros-Khans, and even then I hated the format.

Since Arena, I've been playing a bunch of Standard because of the amount of meme decks I can build digitally for little to no money. The fact Teferi, Hero of Dominaria costs the same as Tezzeret, Cruel Machinist is a major plus.

But I think the real reason FNMs, especially Standard, are seeing lower turnouts is A) the price of Standard; and B) the meta has been garbage for years.

Most of the tier-1 decks are $400+ and sometimes hitting even $600. This is especially terrible because the smaller meta increases the demand of good cards. Playable mythics have destroyed the entire reason Standard was created in the first place.

73 cards mainboard as is.

Step 1: Sideboard out all of the negates but one (70 cards mainboard, 3 sideboard)

That will make this deck a standard powerhouse (well about as much of one as mono-blue tempo is right now!)

TCG prices estimate these will total cost $25.42 and will make it a fully meta deck! Full sideboard included ;)

So ladies and gentlemen I need help. I'm a returning player after like 12 years, and currently only doing drafts (Ravnica so I've got tons of RNG commons). I put below yet to-be a deck for playing standard at my LGS.

Can you please suggest what goes in main and what goes side-board? What do I need?

I may buy some more cards if I can find them at my LGS. Usually I can't, cause most of cards are out of stock. My budget to add more cards are like around $50 but please suggest what goes side-board what goes main...

Thank you very much in advance, I'll buy you a beer if we ever meet =p

let's make me a good deck out of these...

the ones that didn't make to the deck are;